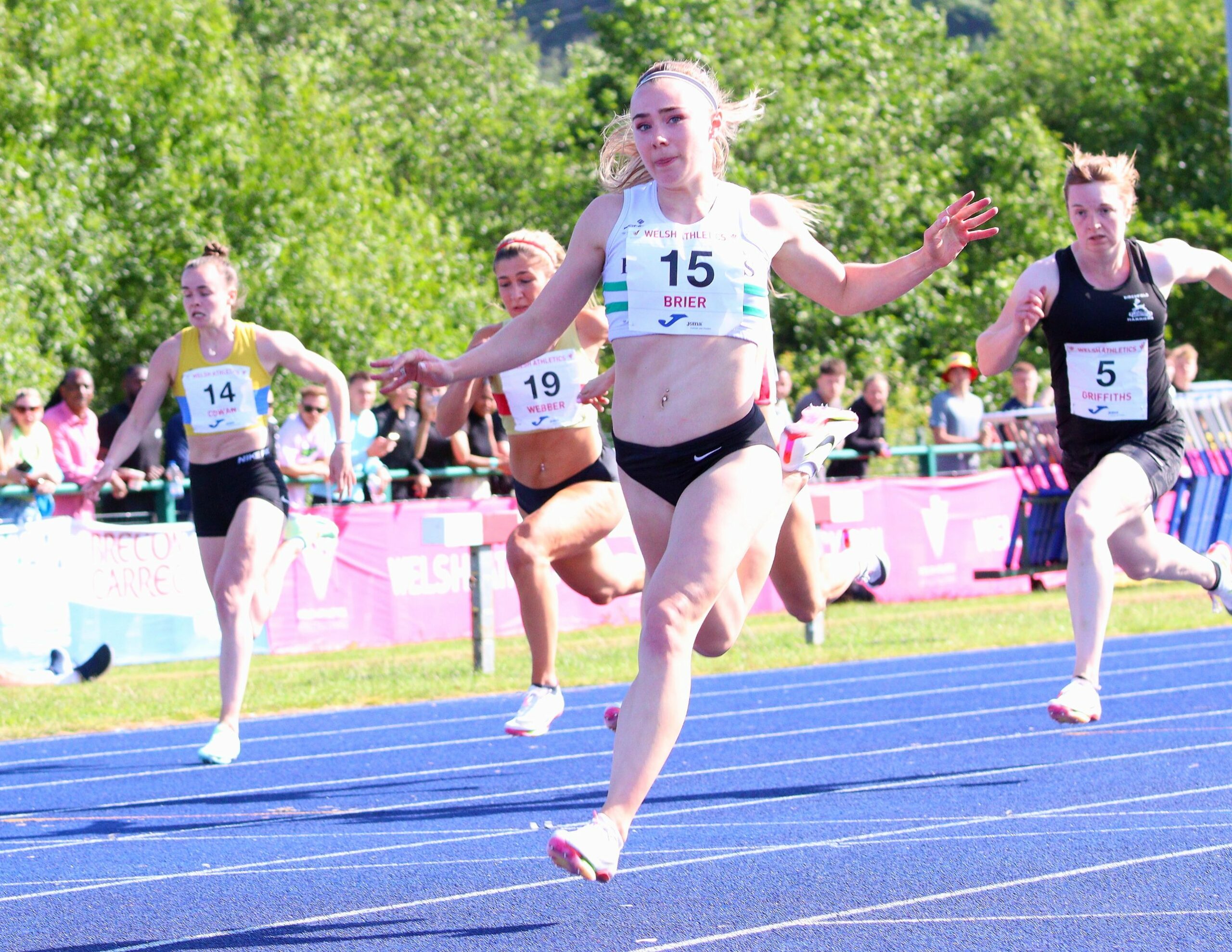 Dylan Thomas once described Swansea as an ugly lovely town.

Commonwealth Games-bound Brier won the Welsh 100m metres title in a wind assisted time of 11.38, ahead of Cardiff’s Issie Tustin.

The performance would have brought the sprinter a new personal best and Welsh record but for the gusty conditions in Cardiff which generated an illegal tail wind of 3.4ms.

But Brier and her coach Matt Elias, himself a double Commonwealth Games silver medallist, were not entirely satisfied with the performance despite the time – an indication of the high standards the 24-year-old is setting herself

Hopefully that big time will come in Birmingham, where Brier will compete at her second Commonwealths – eight years after she ran at the Glasgow games as a teenager.

Brier admits it has been a long road back to the games after suffering a number of injury setbacks in the intervening years.

“I’m in the shape of my life, it feels amazing and I’m just so happy to be back where I am right now.”

Looking ahead to the Games, Brier hopes to break the Welsh 100m record of 11.39 she currently holds with Sallyanne Short and Elaine O’Neill.

“I really want that national record,” said Brier when asked what her goals were for the games.

“It’s my national record and I hold it with two others. But I want to go there, perform and just do my best. I’ve proved everyone, everything and myself wrong this year that there’s no limit. Just go there and do my absolute best.”

A number of other Birmingham-bound athletes shone along with the sun on the final day of the championships.

Osian Jones, who will be heading for his third Commonwealth Games, won the hammer with a consistent series of throws over 70m, the best of which was 70.16m. Jac Palmer claimed silver with 64.92.

The Liverpool AC athlete wasn’t entirely happy with his performance on the day, but said his overall preparation was going well for the games.

“The distance was a bit disappointing,” said Jones. “But my training is going in the right direction. So we’re just waiting for that spark to happen in a comp. I’ve been consistently over 70m in every competition bar one this season.

“So I’m just waiting for things to click in competition. So once that feeling comes it will be second nature after that.”

Joining Jones in the hammer cage at Birmingham’s Alexander Stadium will be Amber Simpson, who claimed the women’s Welsh title on Sunday with a best throw of 61.96 ahead of Cardiff’s Ffion Palmer, who produced a best of 53.11.

The Deeside athlete has been in outstanding form performing on the American college circuit where she competes for the University of Memphis, but admitted she sometimes finds it difficult to acclimatise back to competing this side of the pond.

“It was a tough day today,” said Simpson, who has been consistently throwing over the Commonwealth standard of 62m. “I hit some numbers that were disappointing, but I managed to pull it back and get a good distance out there too.

“I struggle with the transition every now and then, especially coming back to the summer. Sometimes my numbers dip a little bit, but they’re coming up. They’re rising pretty well this time. So I’m just going to keep building ready for Commonwealths in August.

“I’m getting a lot of good support since coming back. I’m training with Osian when I have the chance, and it’s a really great experience to throw with someone as amazing as he is and experienced in the Commonwealth Games too.”

There was a double Welsh-title winning performance for another thrower who will be representing Wales in the midlands later this summer.
Adele Nicoll claimed triumphed in both the discus and the shot put on Sunday.

The Birchfield Harrier threw 47.97m in the discus and 16.91m in the shot put – the event she will be contesting in Birmingham.

Nicoll, who represented Great Britain at bobsleigh in the Winter Olympics earlier this year, said after her shot put win: “All I wanted to do is retain my title and prove that I’m consistently over that standard that was set for the Commonwealth Games.

“It’s really important to me that your consistently performing at a certain level so that you can go into championships and hopefully raise the bar.

“I’m in really good physical shape right now, today was frustrating that it wasn’t a little bit better. But as an athlete, you’re always wanting more. I’m extremely close to my personal best at the moment.

“I believe that I can push on now so when I’m in a competitive environment, when I’ve got girls who are pushing me, I can throw further.

“I’m hoping I’ll go into British champs, raise the game, and then we take it into the Commonwealth Games and perform there.”

The first event of the day – the 10k men’s and women’s race walk – pitted the United Kingdom’s top two female race walkers against each other.
Both Cardiff’s Bethan Davies and Pembrokeshire’s Heather Lewis will be representing Wales in Birmingham.

Sunday’s event at the Cardiff International Sports Campus was the perfect preparation for the Commonwealths as that race will be contested on the Alexander Stadium track.

And it was Lewis, who took the honours on the day as she crossed the line in a new track personal best of 45.27, ahead of Davies, who claimed a bronze medal at the last Commonwealth Games.

Lewis said afterwards: “I was pleased with today. I did what I intended to do and it’s given me a nice confidence boost.

“I’m just looking forward to getting a really good block of training and hopefully be at my absolute best for the Commonwealth Games.

“I think it’s going to be really competitive. Fingers crossed, we can get a gold and silver for Wales!”

Also on the track, Jenny Nesbitt tuned up for her 5,000m appointment in Birmingham by winning the Welsh 1500m title.

The Cardiff based athlete crossed the line in 4:24.57, ahead of club mate Moli Lyons and Swansea’s Carys Jones.

Nesbitt said: “It was lovely to come out and support the event. And I got out of it what I wanted. So, yes, it’s all good preparation leading into the games.”

The men’s 1500m final witnessed one of the most thrilling finishes of the day as Newport’s Remi Adebiyi and Team Bath’s Jack Gumm duked it out running neck and neck down the home straight.

But it was Adebiyi, who just managed to get ahead over the final few metres to claim the Welsh title in 3.57.71.

An exciting day’s action was rounded off in fine style in the men’s 100m where the Welsh title was won by Cardiff’s Sam Gordon, who clocked a legal time of 10.34, finishing ahead of Liverpool AC’s Zach Price in 10.50 and Cardiff’s Makoye Kampengele with 10.62.

Having narrowly missed out on Commonwealth selection, Gordon is now setting his sights on the British Athletics Championships in a fortnight and bidding for selection to represent GB at the World and European Championships.

Full results from the weekends senior Welsh championships and under-15 championships can be found on the Welsh Athletics website.