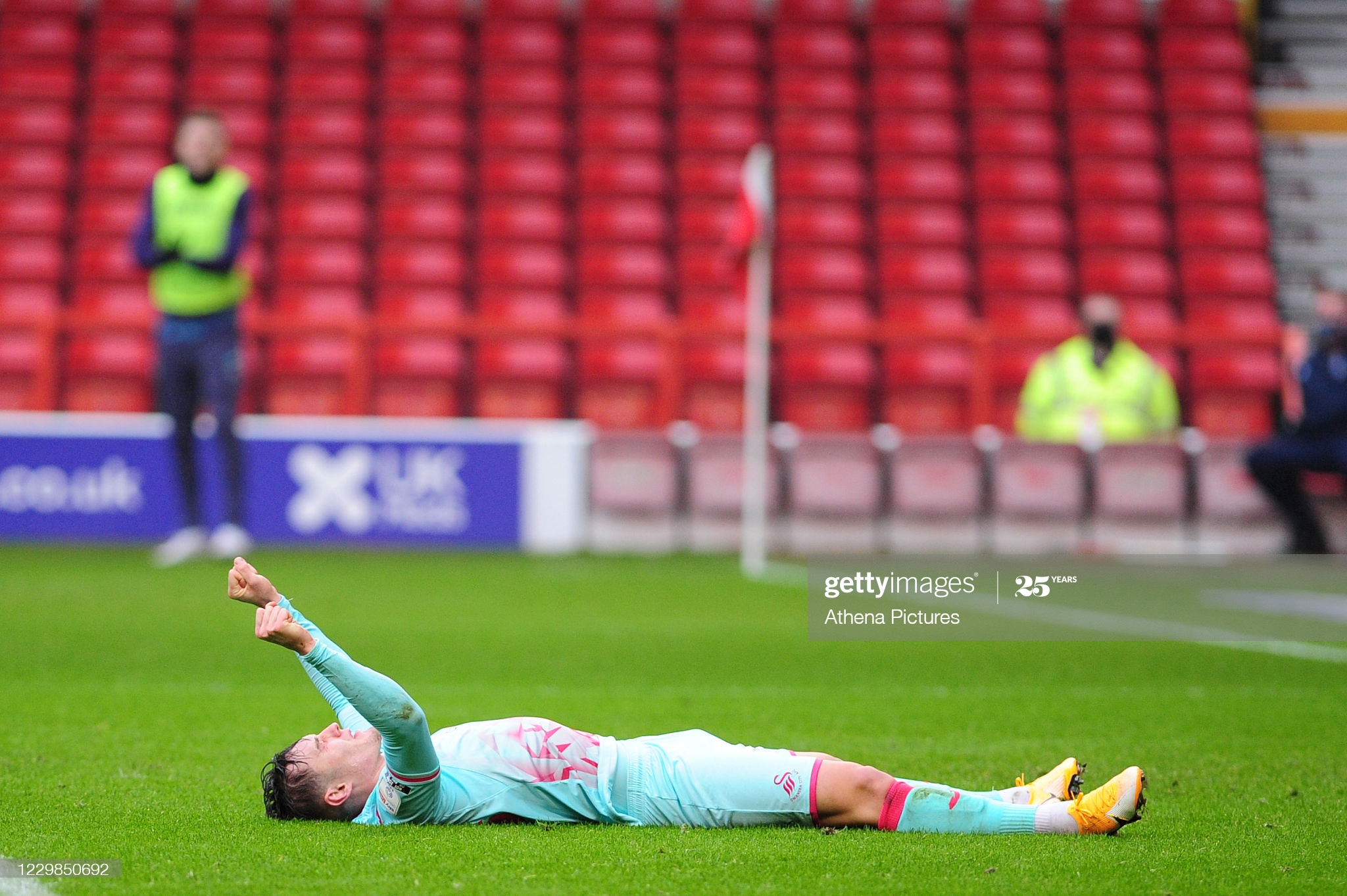 Connor Roberts earned a shiner, a winning goal, and the praise of his manager after his courage paved the way for victory at Nottingham Forest.

The Wales full-back scored with a superb header – bravely climbing over far taller Sammy Ameobi in the 43rd minute – as the Swans went fourth in table with their first triumph at the City Ground in nine meetings since a 2006 League One triumph.

Roberts celebrated from a prone position on the ground then needed lengthy treatment before recovering from a bang in the face and head coach Steve Cooper said: “I thought Connor’s goal epitomised the performance.

“Our wing-back was in the opposition box jumping over a 6ft 4in player, banging his face and heading the ball into the goal.

“I’m not surprised because that’s Connor. I thought that was a really good example of our mentality today. He showed it there, but I thought everybody was the same.

“I think he’s going to have a black eye from it, which will be nice for him, but we want our wing-backs in the box; we want them being a threat.

“Jake (Bidwell) and Connor are constantly in the box and crossing the ball for each other. They’re both brilliant professionals and it’s not luck that they’re that fit to recover and go again; they take pride in what they do.

“But they’re not on their own; I could go through all the team. They’re a great group to work with and they’ve shown it today on a big stage.

“Since we came back after the lockdown, Connor’s been excellent and he’s in a really good place. His challenge now is to keep it going. We’re 14 games in and there are plenty of games to go.”

Roberts was also a key contributor as Cooper’s men maintained their status as the Championship’s meanest defence, while Forest failed to net for an eighth game in 15 contests this term.

It was a victory based on gritty defending and discipline, rather than following football but Cooper made no apologies for a result that leaves the Swans just a point behind the top two.

“I thought we were good for it,” he added. “Forest are a good team. Apart from the teams that have come down from the Premier League, I think this is probably the strongest on paper – in experience and resource. You have to respect that.

“We did that but we also came here to win. All our motivation was around that, so to go and deliver a performance like that was really good.

“I would have like to score two or maybe three, but when that didn’t happen you naturally give up a bit of territory and have to do a bit of defending.

“Freddie Woodman made an excellent save in the first half but apart from that I don’t think he was really threatened.”

Forest manager Chris Hughton said:  “I certainly don’t think we should have lost that game on the balance of play but credit to Swansea because they managed the game very well after the goal and they defended very well when they had to.

“It’s a similar story for us where we’ve had good periods of possession in the final third but we have to be able to capitalise on those periods and we’re not doing that at the moment.

“Against a good team like Swansea you’re not going to get many clear-cut chances and that’s why I’m disappointed that we didn’t take the ones that came along for us.

“After a decent first seven games for myself, we’ve now gone into a really disappointing three-game period and what we have to do is get ourselves out of this period as quickly as possible and that has to start on Wednesday.”

It was Roberts, though, who made the breakthrough when he outjumped Ameobi at the far post to head Andre Ayew’s lofted left-wing delivery back across goal into the bottom corner.

At the other end, Knockaert’s scuffed shot bobbled wide following good forward play by Taylor, but Chris Hughton’s team ended the game having only managed one on-target attempt all afternoon.