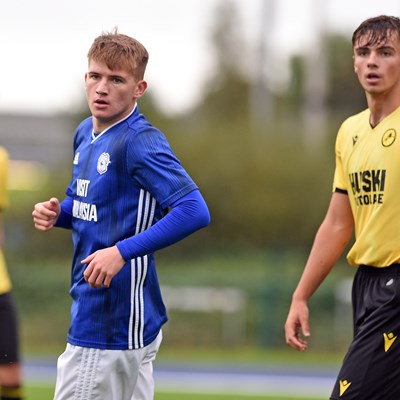 Danny Williams, the Bluebirds’ striker on loan at Merthyr Town, made an excellent debut for his new team in a goalless draw against Beaconsfield Town at the MetCoaches Stadium.

The 21-year-old led the attack with energy and intelligence, linking well with Ian Traylor in the BetVictor Southern League match.

Former Wales Colleges captain, who joined Cardiff City from Haverfordwest County, sparked an outstanding counter-attack just before half-time against Beaconsfield when he intercepted in midfield and went past two defenders.

He played a perfectly weighted pass for Traylor, who smashed his shot across goal and just wide.

Williams had combined well with Lewis Binns earlier in the first half. Binns won possession with a strong challenge and Williams neatly played Owain Jones through, but the shot hit the side netting.

Merthyr captain Adam Davies delivered an accurate cross into the Beaconsfield penalty area where Williams teed up Elliot Richards, whose shot hit the underside of the bar and bounced down onto the goalie.

It was a cold and windy day in Merthyr Tydfil and the home team could only name two substitutes, Corey Jenkins and Camden Duncan.

Bowman saved spectacularly from a Jarrad Wright header, while Jamie Veale, a former Cardiff City youth player, almost caught the ‘keeper off his line from a free-kick on halfway. His effort narrowly missed went over with Bowman beaten.

Merthyr appealed for a goal in the last minutes when a Davies shot was cleared off the line, but referee Jack Clench waved aside the claims.

The Martyrs played flowing football in difficult conditions at times and defended solidly.

Beaconsfield hit a post, but found chances few and far between.

The ‘keeper was almost caught out when a long, high pass played by Merthyr was caught in the wind and he back peddled furiously before slapping the ball away.

Bowmen realised a successful catch would see him fall across his line and when the ball ran loose substitute Duncan darted in, but defender James Taylor lunged in and put the ball out of play.

The next test for Merthyr Town is Saturday’s fixture at Salisbury FC where former Crystal Palace, Leicester City and Millwall player Steve Claridge is manager.