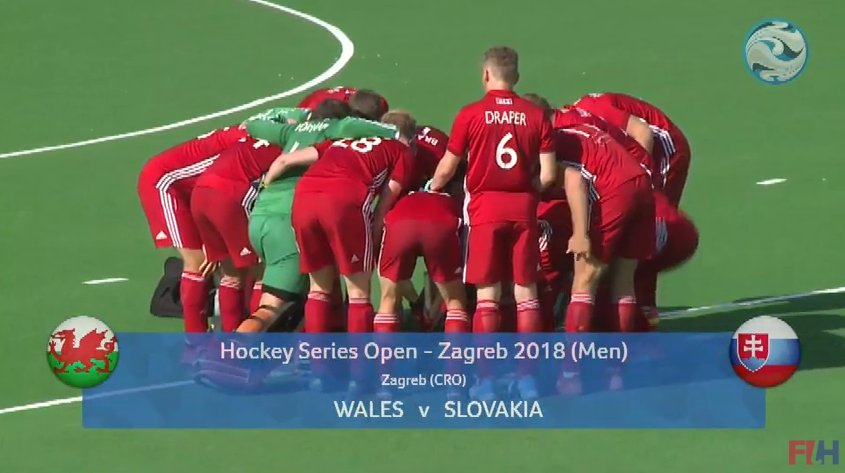 Rhys Bradshaw is firmly establishing himself as the rising star of Welsh hockey and the talented 17-year-old grabbed his first senior international goal in the 6-1 thumping of Slovakia in opening game of the Open Series in Zagreb.

Now both he and his Welsh team mates face a step up in class when they meet tournament favourites Austria on Tuesday in what is likely to be Wales’ toughest test in the week-long, four match competition.

The Austrians sit five places above Wales in the Hockey World Rankings and were relegated from the top-tier of the European Hockey Nations Cup last year along with Poland. Wales, on the other hand, gained promotion.

Zak Jones’ side played a three game series in Poland earlier in the month, losing three close contests, so their performance against the Austrians will give a real indication of how they are developing ahead of next year’s European competition.

Before then, though, Bradshaw will be leading the Welsh assault on the EuroHockey Youth Championships II Under 18 title in Cardiff between 22-28 July. Wales are in a pool with Switzerland, Scotland and the Czech Republic, with Italy, Russia, Austria and Belarus also heading to compete at Sophia Gardens.

The 26-year-old Furlong hammered home a penalty corner to open the scoring after only six minutes and then a penalty stroke later on. The other Welsh goals came from Ben Francis and Rupert Shipperley.

“I was pretty pleased with the overall performance. A comfortable win is always a welcome start to a tournament, but the bottom line is we were not clinical enough,” said head coach, Jones.

“We created numerous opportunities and, although our intent was good, we are all pretty disappointed with the quality of our execution in the final third. We will look to improve in that area as we move through the tournament and are all looking forward to a hugely important game against Austria.”

These are exciting times for hockey in Wales with the men targeting next year’s Euro Championships in Belgium as their biggest challenge for years. Both the men and the women have a GB squad member at present, Dan Kyriakides and Rose Thomas, and the hunt is still on for a new Head of Performance.

That vacancy was created by Dan Clement’s move to the Welsh Rugby Union and Welsh Hockey chief executive, Dave Phenis, knows he faces a tough task in filling his shoes.

“Dan created the performance environment at Welsh Hockey that has seen both the men’s and women’s teams improve dramatically. We want to build on what Dan has done in the past four years,” said Phenis.

“We had a good response to our advert for his replacement and 14 of the 24 applicants met the requirements. We had hoped to get a replacement in pretty quickly, but the key thing is getting the right person.

“We don’t want to compromise because it is such a key role. We’ve just recruited two new team managers and all our focus at the moment at the top end of our sport is on next year’s Europeans.

“The men did fantastically well to reach the top group for the first time in almost 20 years and the aim is to stay there. We all saw what they are capable of at the Commonwealth Games.

“But in a competition that will include England, Belgium, Netherlands, Germany, Spain, Scotland and the Republic of Ireland it is going to be a major test for our players. They will be playing against a number of full-time, professional sides.

“The game is growing in Wales and our performances at international level are improving. However, we can’t afford to stand still and we need to find ways of giving our elite athletes the best chance to compete on level terms at the top end of their game.”