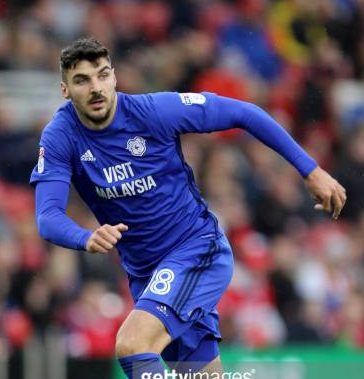 Garry Monk is hopeful his move for Cardiff City’s Callum Paterson will be sealed today – saying the Scottish international would add the physical presence he is looking for at Sheffield Wednesday.

Ex-Swansea City boss Monk confirmed that the deal for the 25-year-old is close after his side’s Championship defeat at Bristol City.

“Callum is obviously someone we’re very interested in. We’re talking between the clubs,” said Monk.

“Hopefully that can be confirmed tonight.

“I’ve not spoken to the club today on anything like that and they’ll let me know if that is confirmed and agreed.”

Paterson, originally signed as a defender by the Bluebirds in 2017 but who  also played in midfield and then up front, netted seven goals in 42 games last season.

But he appears to have become surplus to requirements by current manager Neil Harris.

“Callum – if we can, I don’t want to talk too prematurely before it’s done – will bring that physicality side of it,” added Monk, whose side started the season on -12 points after financial irregularities.

“We’ve got other strengths and elements to the forward line but we don’t have that physicality.

“There are games this season in the Championship typically where we’ll need that option of that physicality and mobility as well.

“We don’t have that in the forward line. It’s something that we lost in the summer and we’re just looking to replace that.

“If it’s confirmed and we can bring him in, then he’ll fill that void and contribute to the other attributes in those areas so that’s the thinking behind it.

“It’s just a case of adding strength to what we’ve got and adding the missing pieces that we haven’t got at this moment in time.

“That will be a big help if he comes into the building.”

But Harris admits City will need to replace Paterson as he looks to bolster a squad that suffered a second successive home defeat by Reading on Saturday.

“If Callum does move on then we certainly need to replace him,” said Harris. “He is one of our attacking players and we need to have strength in depth during the course of the season.

“I’ve talked about adding in that area of the pitch already and if Callum is moving on then we need to add to it. I’m pleased with some of the variations we’ve got but I want more.

“I want selection headaches so if we do lose anybody we need to replace them, in my opinion.”

One thought on “Callum Paterson Will Bring Physical Presence We Need, Say Garry Monk As He Confirms Deal Is Close”