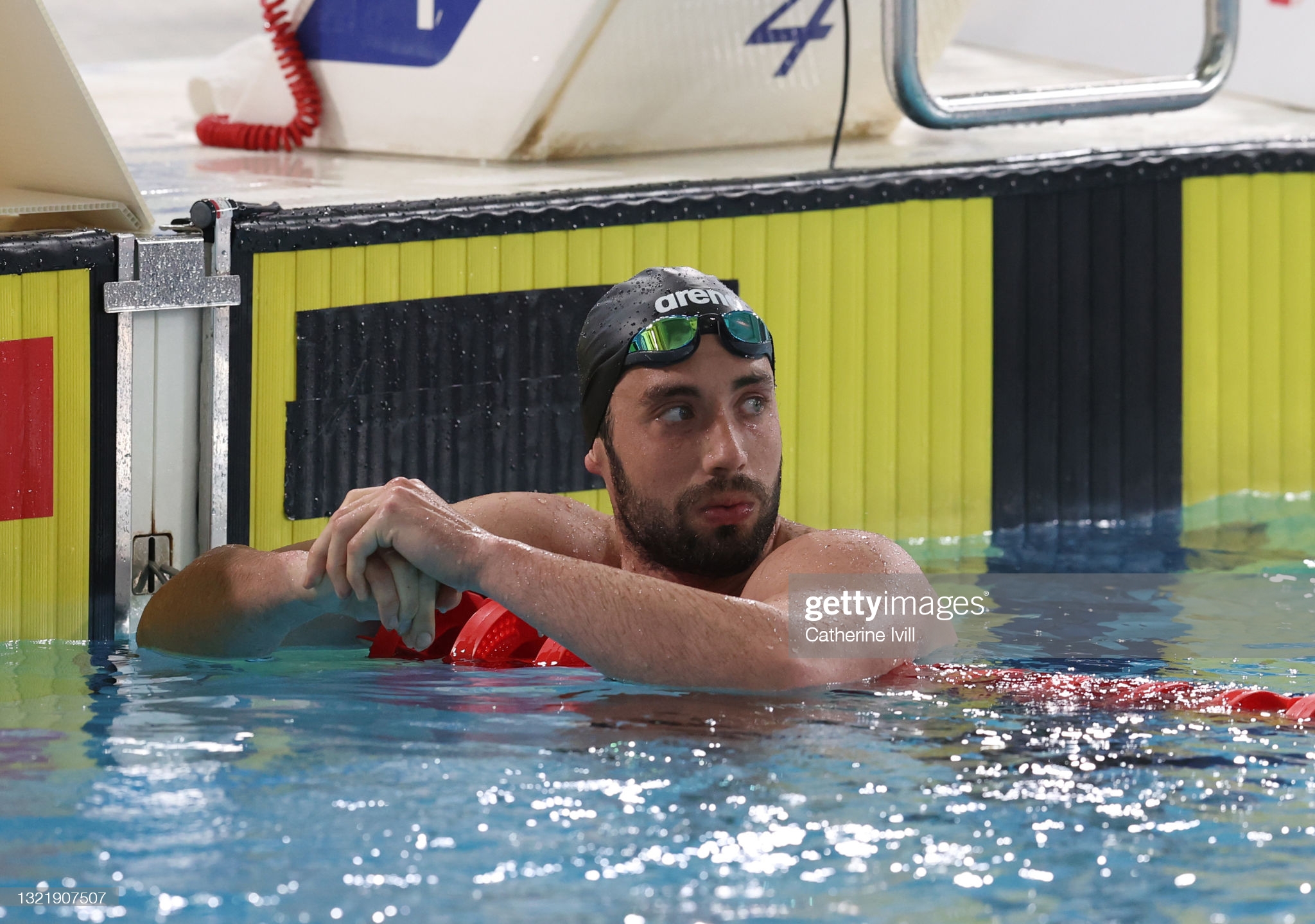 Welsh swimmer Calum Jarvis is aiming for a medal in Tokyo. Pic: Getty

Welsh swimmer Calum Jarvis is now within touching distance of fulfilling his dreams and winning a medal at the Tokyo Olympics. His Team GB relay team were the fastest in their Men’s 4x200m freestyle heats but this success was a long in time in the making, as Tom Prosser discovers.

Their GB team finished the heats with the fastest time of 7:03.25 and will now be aiming for a medal in the final which will take place in the early hours of tomorrow morning (Wednesday).

It’s been a long nine years for Jarvis who attempted to qualify for the Olympics in both 2012 and 2016 but he has never given up and is now on the brink of achieving something special in Tokyo.

“When I touched the wall, it was a mixture of relief, excitement and I just couldn’t gather my thoughts really as going to an Olympics has been something I’ve been waiting to achieve for a very long time,” said Jarvis who has previously won gold at both the World and European Championships.

“In 2012, I won the Olympic trials but I didn’t quite get the time needed to qualify and then in 2016 I was I’ll just before the trials which didn’t help me.

“So to do it now five years later is unbelievable and a dream come true.”

Jarvis is married to former Olympic swimmer Jemma Lowe who competed at both the 2008 and 2012 Olympics.

Lowe did not medal at either Olympics, she finished sixth and ninth in her races in 2008 and sixth and eighth in London four years later.

Jarvis will be now looking to go one better than his wife and leave the Olympics with a medal and perhaps more importantly the bragging rights.

Lowe hasn’t just been a supportive wife but she has been able to offer Jarvis a real insight in what it’s like to go to an Olympics.

“I got married to Jemma in September last year, the idea was for us to get married after the Olympics but obviously that didn’t happen,” said Jarvis.

“But now I’ve got a wife going into the Olympics which is great.

“She’s been giving me a lot of help, telling me both what I do and don’t need to do, as this is all new to me and she’s done it twice before.

“Having her there to guide me through all the different steps has been really nice.

“She’s 100% behind me on my journey, she’s been an incredible support, I could ask for any more from here.”

The 29-year-old first learnt to swim at his local pool in Ystrad Rhondda but then at a young age he moved to Cornwall which made him fall in love with the water even more.

“I first got taught to swim by a para swimmer who was missing a leg, the lessons were in Ystrad Rhondda and my brother learnt with me too which was awesome,” said Jarvis.

“Then at a young age, we moved down to Cornwall and continued our swimming there.

“We certainly made the most of it, we were always swimming, surfing and sailing.

“We joined the local swimming club and me and my brother were really competitive with each other.”

At the beginning of his teenage years, Jarvis’ outlook on swimming changed and that’s when he realised that swimming could change his life forever.

“It wasn’t until I was 13 that my coaches from Plymouth sat down with me and told me that I have lots of potential and that they saw the improvements I made in just one week.

“They then said if I keep this up then I could be a potential Olympian.

“At that point, I was like wow the Olympics, yes do this.

“But it’s not about improving in just one week, it’s takes years and years of training.”

Jarvis was very keen to stress the important role his parents have played in his career so far, like most parents around the country, they were needed to be a taxi service for their son’s swimming.

“They’ve played a massive role, it wouldn’t have happened without their thumbs up.

“They’ve made lots of sacrifices such as taking me everywhere and I’ve got four brothers as well so to make sure we were all provided for is really appreciated.

“When I was doing the Devon national championships, it was about a four hour round trip so I’m really thankful for the help they’ve given me along the way.”