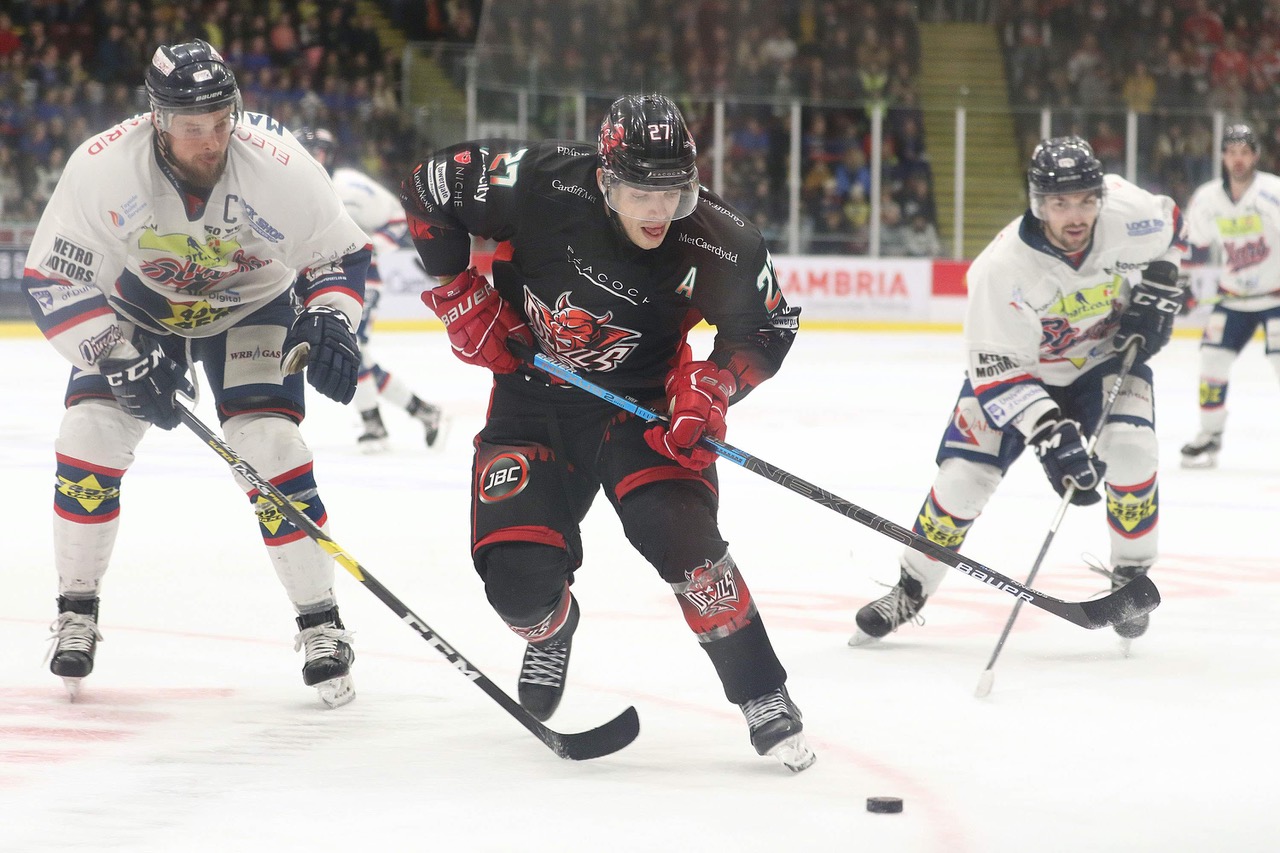 Man of the match Joey Haddad on tghe charge for Devils against Dundee Stars. He took his goals tally to 21 for the season. Pic: Helen Brabon.

The pals from Calgary in Canada, plus 12 friends and family, watched from the block 13 standing section – an area where flags, hooters and noise are encouraged.

King and Co got together with Red. Army supporters club members to ensure they knew the words of Devils songs and threw themselves into helping to fire up the atmosphere around the rink.

More than 3,000 spectators packed the Viola Arena, Devils won 5-2 to stay right in the title chase and head coach Andrew Lord said: “A sold out barn with the owners in town. That’s always fun.

“They get everybody going and that’s helpful from my side of things.

“I loved the buy-in from Devils players. They were humming right from the start and, apart from a six minute lull in the second, it was a good performance and a successful weekend.”

Cardiff followed a 2-1 win against Manchester Storm on Saturday by cruising to a 5-1 lead after two periods against Stars and seeing out the match to stay three points behind league leaders Sheffield Steelers with four games in hand.

Dundee coach Omar Pacha’s team boarded their team coach knowing they had wasted a golden chance when they had more than a minute on a 5-3 powerplay.

“Devils were 1-0, but we could not score the goal we needed and that seemed to give Devils extra momentum,” Said Pacha.

Man of the match Joey Haddad scored two goals, netting on a powerplay and then adding a shorthanded strike after Stars made errors on D and left him alone in front of their net.

Blair Riley opened the scoring on a powerplay at 6-31 then Haddad fired his first of the game at 14-51.

Stephen Dixon restored the three-goal advantage at 34-50 before Haddad’s shorthanded goal, his 21st goal of the season, at 38-08.

Dundee scored a consolation goal in the final period, but by them Devils were well on their way to victory.

Devils now focus on their home clash with leaders Sheffield Steelers next Saturday – a huge clash in the chase to be champions.

Steelers were 3-1 down against Glasgow Clan for the second time in a week last night. On both occasions they hit back to win, beating Clan 5-3 last weekend and 7-3 on Sunday.

Devils were without injured players Joey Martin and Matthew Myers, while Toms Rutkis, who plays on a two-way contract with Swindon Wildcats, was added to the team and was given plenty of shifts.