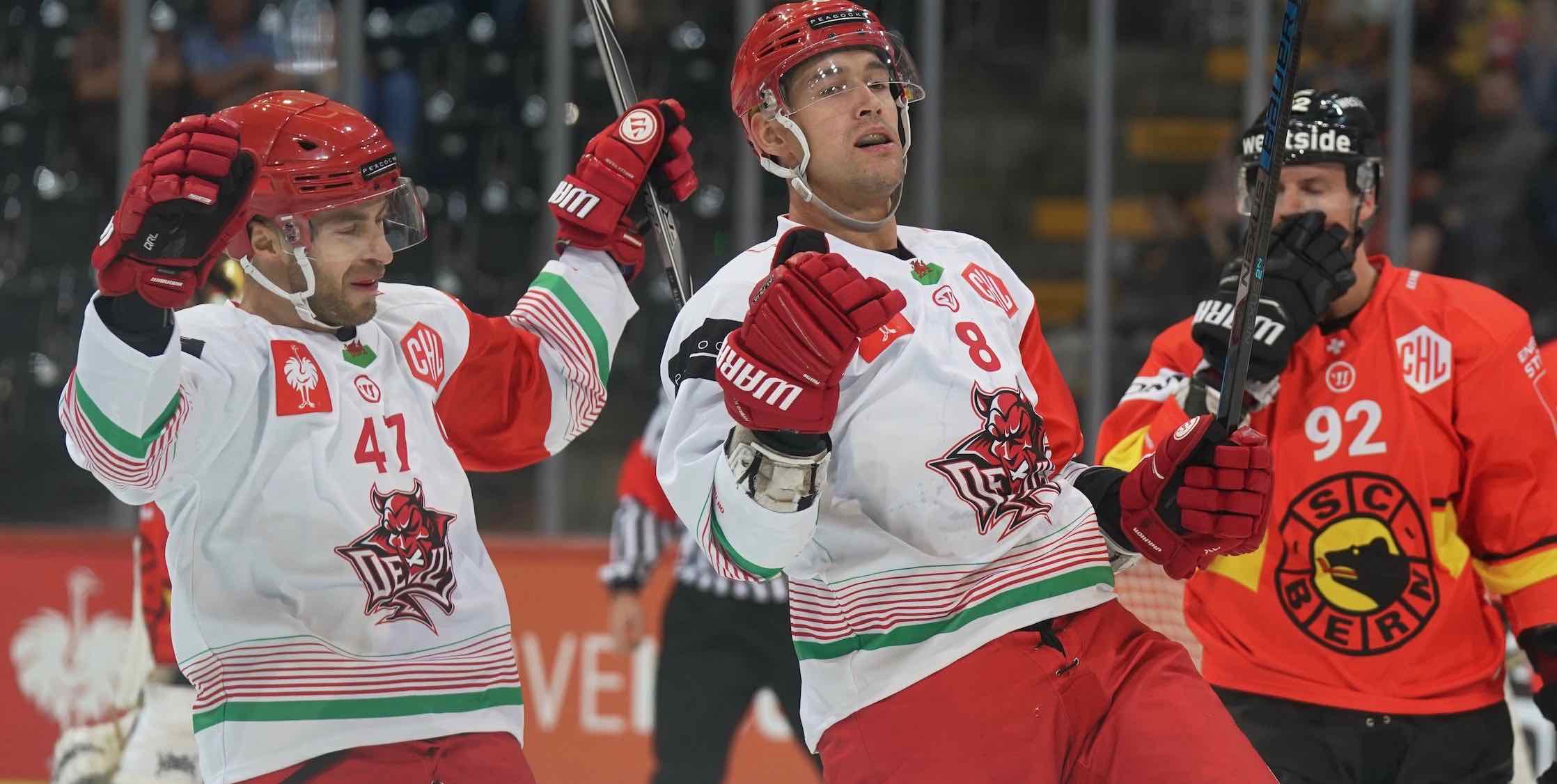 Goal! Champions League celebration time for Matthew Myers in Bern last season. He is back for a 10th season playing for home city club. Myers and 2019-20 will be his testimonial season.

Canadian television commentator Aaron Murphy was full of praise for Cardiff Devils after their Champions Hockey League clash with SC Berne in Switzerland.

The highly experienced Murphy tweeted after Devils were edged out 3-2: “To @cardiffdevils players, staff & fans – you can hold your heads high. “I’ve been calling @championshockey now five years and the game v Bern was most complete effort by an @officialEIHL team in the competition ever.

Bern were trailing twice, went into the fin al period 2-1 down and were hugely relieved to score their winner five minutes from the end.

More than 300 Devils fans were in Bern for the CHL group match and defenceman Ben Blood sent a message to the Red Army faithful, saying: “DevNation, needed some time to reflect, always reflect.

“Your support on the road was powerful. You have great souls. We love you and appreciate you. Your energy is contagious, you make a difference. #godevs.”

Bern coach Kari Jalonen was clearly shocked by the powerful, fluent style of the Devils and said: “It was a tough game. Devils played physical and had good defence.

Matthew Myers from Cardiff after a loss in Bern https://t.co/C7vfkvNOSg via @YouTube

“Our third period was really strong and that’s why we took the three points.”

Devils head coach Andrew Lord was devastated for his players and said: “I’m sick for the boys that we didn’t get it done.

“I feel for our players. They played so hard for 60 minutes.

“The first two periods were great and we created chance after chance. Credit to their goalie (Leonardo Genoni) and the Bern team.

“Overall we just didn’t quite have enough, but it was one heck of a performance from the Devils players.”

Devils follow their CHL adventures by playing Elite League and Challenge Cup fixtures over the rest of September.

Lord’s team produced a sizzling display against Bern, one of the biggest and most powerful teams in Europe, leading 1-0 and 2-1.

The Swiss team edged to victory in Cardiff Bay after sudden death overtime, while their late winner in Bern maintained their winning record and meant they have already qualified for the knockout stages.

Devils have two group games left, against Vaxjo Lakers home and away next month.

Captain Jake Morissette and his Devils piled on the pressure throughout the opening period in Bern and the Welsh club went ahead when Mike Hedden stripped the puck off a defenceman and found Matthew Myers streaking towards the net.

Myers fired top shelf to give the Devils a 1-0 lead at 12 minutes five seconds.

Bern tied the game at 1-1 just over four minutes into the middle period when Simon Moser shot the puck through traffic past Ben Bowns at 24-16.

Gleason Fournier then picked out Joey Martin, all alone at centre ice, and hit him with a long range pass. The Canadian sharpshooter went in on the breakaway, pulled the puck to his backhand and roofed it over the shoulder of goalie Leonardo Genoni to put the Devils up 2-1 at 30-48.

Devils held their lead into the third period until 44-55 when Gregory Sciaroni tied the game up with a tip off a shot from Eric Blum to make it 2-2 with 15 minutes to play.

Bern ramped up the pressure and Devils were forced to weather the storm in their defensive end, but, with just under five minutes to play, defenceman Roman Untersander blasted a slap shot from the blueline that beat Bowns to put SC Bern 3-2 head.

Devils gave it everything they had, even pulling the netminder for the final minute, but Bern held on for the 3-2 win to go top of Group G and confirm their qualification into the knockout stages of the Champions Hockey League.

Now Lord and his Devils focus on League and cup matches, starting with three successive fixtures at Ice Arena Wales.