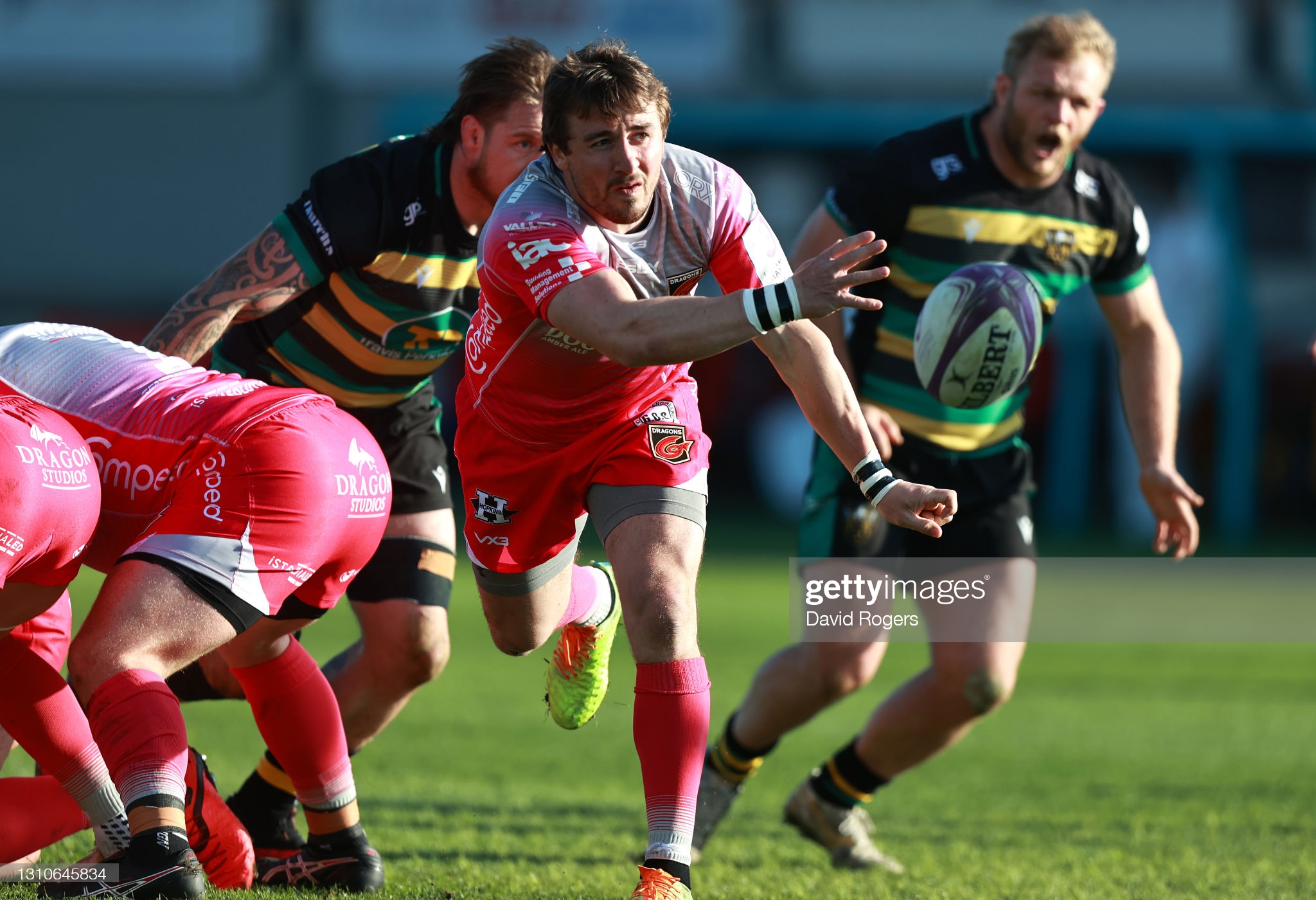 Rhodri Williams of the Dragons in action during the European Rugby Challenge Cup tie against Northampton Saints. Pic: Getty Images.

The Welsh regions return to action this weekend when the new Rainbow Cup tournament kicks off with two Welsh derbies. The Dragons were surging when the Guinness Pro 14 came to an end and captain Rhodri Williams is optimistic their charge can continue as he tells Graham Thomas.

Rhodri Williams may have lost his position as leader of the Dragons’ West Wales car club – but he’s not ready to lose anything else this season.

The scrum-half used to be the senior member of the car share group that ferried west-based players up the M4 to Newport.

Covid rules soon meant car sharing was banned so Williams, Adam Warren and Jordan Williams will make their separate ways to Rodney Parade on Sunday for the Dragons’ opening game in the new Rainbow Cup at home to the Scarlets – a match that will be shown in full on S4C.

Williams believes the Dragons can be a force in the new tournament, just as he thinks the threat of losing his starting place at No.9 to Argentinian international Gonzalo Bertranou has forced him to respond.

“In the last few matches we have played, we’ve been showing positive intent and we aim to keep that going in this tournament,” says Williams who will be up against his former region.

“As a playing group, we are excited about playing Welsh derbies. I don’t want to risk being shot down by saying we are now at the stage where we are going to win trophies, but we are moving in the right direction.

“We are now a confident group and we have shown what we can do in our recent games against Northampton, Edinburgh and Glasgow.

“This is a new competition and we’re going to give it a good go. There may be a chance for some of the younger players in this tournament – perhaps some who haven’t played much this season – to get a feel for what these Welsh derbies are all about.

“Whether the other regions take that approach, I’m not sure. But even if there are some youngsters given a chance, we’ll be going all out win against the Scarlets and the rest of the games. It’s a tournament we want to do well in.”

In the wake of the travel problems that arose for the South Africans teams, the Rainbow Cup has been adapted.

Instead of one competition, it has been split into two. A total of 16 teams are competing in the Guinness Pro 14 Rainbow Cup – but the four South African sides are playing in their own Rainbow Cup SA.

Williams admits the split was a disappointment, but insists the Welsh derbies were always going to be high on everyone’s agenda.

“It would have been a good experience to have played against World Cup winners in those South African games, so that was a blow,” says the 27-year-old.

“But the decision was just a reflection on what things have been like for players over the past 12 months. We’ve had to adapt.

“The initial plans for the tournament sounded great, but we all had to learn that things don’t always go to plan any more and health has had to take priority. We’ve got used to that.

“The bottom line is that we’ve got Welsh derbies coming up. The players really look forward to them and so do the fans, even if, unfortunately, they can’t be in the stadium.”

As well as the disruption caused by the pandemic, the other challenge Williams has had to respond to has come from Bertranou.

The Pumas star arrived at Rodney Parade in February and immediately gave Welsh international Williams another rival for his shirt to join Tavis Knoyle, Luke Baldwin and youngster Dan Babos.

Bertranou has already made four starts and although Williams retained his starting place for the European Challenge Cup defeat to Northampton, the Dragons skipper knows he has had to up his game and respond.

“He’s an international scrum-half so he was always going to bring good quality and improve competition.

“I’ve learned a few things from him, but he has also given me a bit of extra motivation and extra fight, which is what we want in every position in the squad.

“Gonzalo gets the ball away very quickly, he’s got a good kicking game and he’s driven up the level of competition. That’s something we have struggled with at the Dragons in the past – but to be a successful team you need that depth.

“We are getting that now. Before, there were times when if we had one injury we were on the back foot. But now, if we need to replace one player with another, it’s much more of a seamless transition.”

A more familiar rival for both country and region is likely to face Williams on Sunday – his old Scarlets sparring partner, Gareth Davies.

“Gareth was there when I was there and he’s still going strong. It’s always a good contest.”

Join the Clwb Rygbi team for a full broadcast of the Rainbow Cup match between the Dragons and Scarlets, played earlier at Rodney Parade.