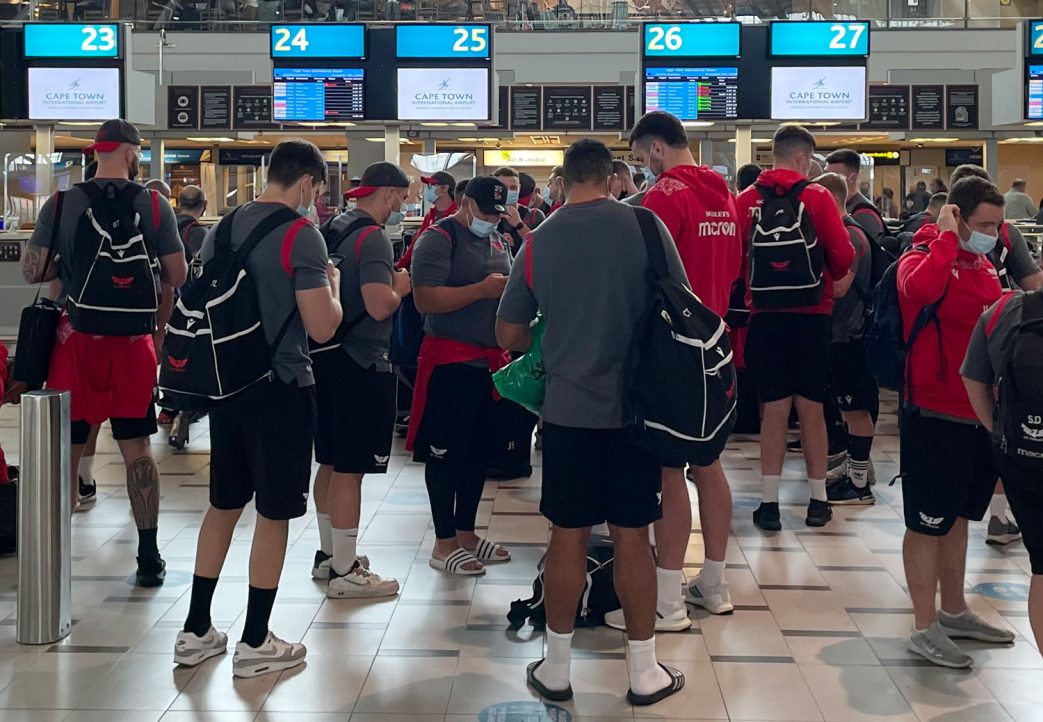 Scarlets players prepare to fly from Durban to Cape Town before their onward flight to Dublin. Pic: Scarlets rugby

Cardiff and the Scarlets are facing a massive joint hotel bill of £250,000 as well as major disruption to their European campaigns if they are forced to self-isolate in hotel quarantine for 10 days following their troubled trip to South Africa.

The Scarlets have made it back as far as Belfast – via Durban, Cape Town and Dublin – but their whole party is now in a UK government-approved isolation hotel as they await further news.

Cardiff, however, are still in South Africa, with two of their group having tested positive for Covid-19 at the weekend, with one of those cases suspected to be the Omicron variant that sparked travel restrictions on flights from South Africa to the UK.

Neither team were able to beat a 4am Sunday deadline for passengers returning from countries in southern Africa, after which hotel quarantine became a legal requirement.

Cardiff may have to isolate in Cape Town for 10 days, before they can fly back and as it stands be legally required to a further 10 days in a UK hotel.

The regions were stranded after their matches in the United Rugby Championship – which was expanded this season to include South African sides – were postponed due to the country being placed on the red list after the outbreak of a dangerous new variant of Covid-19.

Scarlets fly out of South Africa
Scarlets can confirm the travelling squad and staff are currently flying from South Africa to Europe.
Read the full update 🔗 https://t.co/FKUWFNMI2M

Almost 100 players, coaches, back-up staff and officials are affected and are now set to go into UK hotel quarantine.

At £2,285 per person for 10 days, that will work out at £228,500, which added to the teams’ South African bills will work out at a quarter of a million pounds – even though they played no matches.

UK government rules currently state: “If you arrived in England from any of these (red list) countries after 4am 28 November, you must follow standard red list rules. This means you must quarantine in a managed hotel, and take 2 COVID-19 tests.

“If you’ve been in a red list country in the 10 days before you arrive in England, once you arrive you must:

You must follow these rules even if you’ve been fully vaccinated.”

Welsh government are currently following the same rules as in England.

The events of the last few days underline the rank stupidity of Welsh pro rugby not being aligned with the English system. From the stupidity of playing ‘league’ games on a different continent to the RFU being unable to provide a pro second tier – the solution is obvious

The disruption will also have a knock-on effect and place a big doubt over their opening matches in the Heineken Champions Cup which are scheduled for December 11.

Cardiff are due to host holders Toulouse t the Arms Park on Saturday, December 11, with the Scarlets away to Bristol on the same day.

Neither club has played a match for five weeks and their ability to have any worthwhile preparation ahead of those games would appear to be in severe jeopardy.