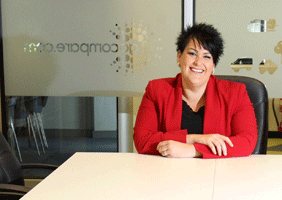 Hayley Parsons has followed in the footsteps of Debra Williams in joining a Welsh regional rugby board as a non-executive director.

Williams became the first woman to get involved at boardroom level with one of the four Welsh regions back in 2012 and came from a similar commercial background to Parsons, who has been announced as the latest recruit to the Cardiff Blues board.

Williams, who was managing director of insurance company Confused.com, helped in a major financial turn-around at the Ospreys before standing down early in 2015. The Ospreys had posted an annual loss of £1.9m in 2012, but had reduced that to a mere £6,000 two years later.

The 45-year-old Parsons began her career at the Cardiff-based Admiral Group and was a central figure in the launch of Confused.com. She left the company to establish GoCompare in 2006, which quickly grew to become a dominant player in the price comparison industry.

She sold her shares in that company in 2015 and now becomes the first female to be appointed to the Blues board, which installed a new chairman, Alun Jones, in January.

Blues fans will be hoping she can help to inspire as big a turn-around in the financial fortunes of the Arms Park-based region as Williams played her part in Swansea. Jones admitted at the launch of the Blues’ last financial accounts that “they didn’t make pleasant reading”.

Former chairman Peter Thomas wrote off £3.3m of the near £14m debt owed to him and converted a further £10m into shares. Other directors followed suit.

“The financial results for the 2018 year do not make pleasant reading, but do contain some significant developments which bode well for the future,” said Jones.

“The company has undertaken a capital restructuring as part of the broader changes to the organisation of Welsh professional rugby.”

The addition of Parsons, a noted entrepreneur and business angel, to the Blues board should provide Jones and chief executive Richard Holland with a major ally to turning around the business and helping to make the region more competitive on and off the field.

“We are absolutely delighted to welcome someone of Hayley’s calibre to the Blues’ board and have no doubt that she will prove an invaluable addition,” said Jones.

“She has a diverse and hugely successful business background and will bring strong commercial, marketing and social media experience, which will be beneficial to the region’s business plan.

“This is just the latest step in the modernisation of our board and our corporate governance and demonstrates our desire to become more diverse and representative of all of our stakeholders.”

A member of Inspire Wales, an investment consortium made up of 20 successful Welsh business people who work to find exciting businesses to invest in and mentor, Parsons is also an adviser to the Welsh Government on the development and delivery of its entrepreneurship agenda.

“I’m very proud to be the first female board member of the Cardiff Blues. I am a huge supporter of Wales in terms of its economy, its people and its potential, as well as Welsh rugby and the regions,” she said.

“In this role as a non-exec director, I will be looking at things from a fresh perspective and with a new approach. There’s a huge amount of potential here and there’s a lot more we could, and should, be doing to achieve that and I’m looking forward to getting stuck in and helping in any way I can.

“With the changes being made by the Blues at the moment, I am confident that we can develop a sustainable business model for the region, make sensible business decisions, while growing and developing as a business to deliver success.”