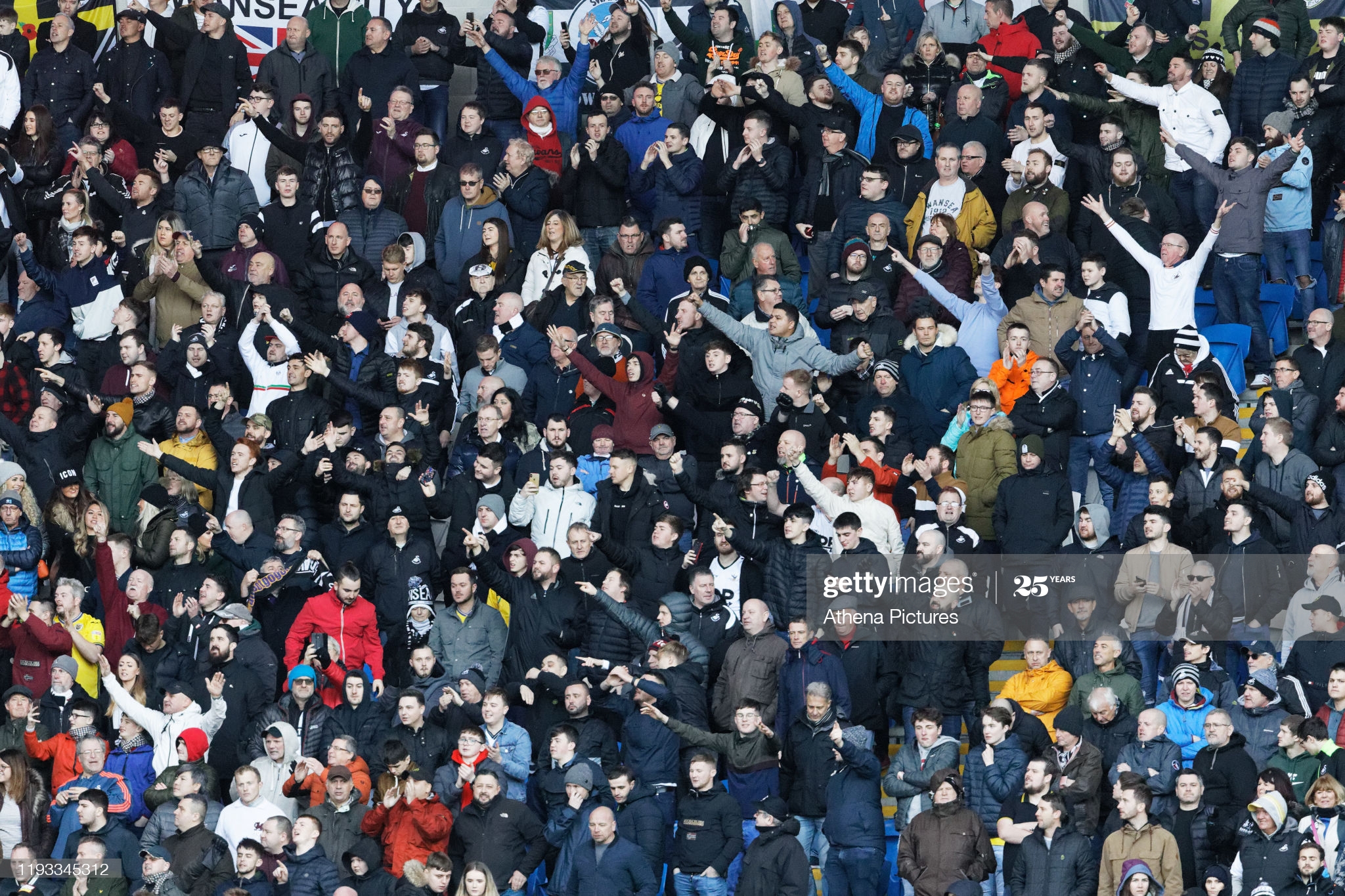 Swansea fans during the match between Cardiff and Swansea at the Cardiff City Stadium on January 12, 2020. Pic: Getty Images.

Welsh football fans could return – in small numbers – for the clash between Cardiff City and Swansea City on December 12.

There have been no fans in stadia in Wales since March, but the picture could now change in time for the Welsh derby when Neil Harris’s Bluebirds host Steve Cooper’s Swansea City side next month.

Meetings are scheduled between the Welsh Government and the football clubs for the early part of next week to discuss opening up football and rugby stadia in Wales on the back of Boris Johnson’s announcement that fans can return in England.

The Prime Minister’s ‘Covid Winter Plan’ will come into play after lockdown in England ends on 3 December and clubs who play in Tier 1 areas will be permitted to host 4,000 spectators.

Those in Tier 2 will be able to welcome 2,000 spectators, while Tier 3 teams will still have to play behind closed doors.

Cardiff and Swansea had hoped to get clearance form First Minister Mark Drakeford to trial a pilot scheme with 2,000 fans in September, but an increase in COVID cases stopped that. Now they are hopeful of finally getting the green light.

“Even if we are only allowed 2,000 fans back in the stadium it would make a world of difference. It would make it feel like a football atmosphere again,” said City boss Harris.

“We have had no steer from the Welsh Government as yet, but the sooner the better as far as I’m concerned.”

Cardiff are due to host Huddersfield Town next Tuesday, but that is likely to be too early for them to implement a plan to accept applications from their 12,500 season ticket holders for access to game.

Their next home game after that will be on 12 December when Swansea travel the 40 miles up the M4 for the biggest game in Welsh football.

Before then the Swans have games at the Liberty Stadium against Luton Town on 5 December and Bournemouth three days later.

Harris has told his Cardiff City side the push towards the promotion places must start now, ahead of the Christmas rush.

Just imagine when fans return to football grounds, a packed to the rafters Cardiff City stadium on a cold dark night with one of the big boys coming to town to play us.

The canton stand in full voice roaring the dragons on the pitch onto another famous night for Cymru 🏴󠁧󠁢󠁷󠁬󠁳󠁿 pic.twitter.com/gBtCqdzrjo

The Bluebirds boss is growing impatient of dropped points and will send his side to Coventry this evening with a clear message to start “the big push” back towards the play-off places in the Championship.

Another frustrating draw at his former club Millwall last weekend left Cardiff floundering in 15th place and needing to bridge an eight point gap to the play-off places.

With 10 games to go before the end of the year, Harris is demanding better results to go with his side’s improved performances – starting at Coventry.

“I don’t want the gap to get any bigger, although we showed last season that we are capable of closing a gap of that size. There are 10 games to go up to the end of the year and the big push starts now,” said Harris.

“I’m absolutely aware that football is a results business and we haven’t had the results to go with our performances. I don’t fear for my job, but we are a club that should be in the top 10 and pushing for a top six finish.

“I’m feeling more pressure now than at the start of the season because we haven’t been won enough games. But it is a pressure because I want to be a winner.

“We have conceded the first goal too many times and that has become our Achilles heel. When we go ahead in games we are a difficult team to break down and good on the counter attack.”

With only one win in their last seven games, Cardiff have picked up a mere seven out of 21 points. Coventry have won only once in their last 10 outings and are six places below the Bluebirds flirting with relegation.