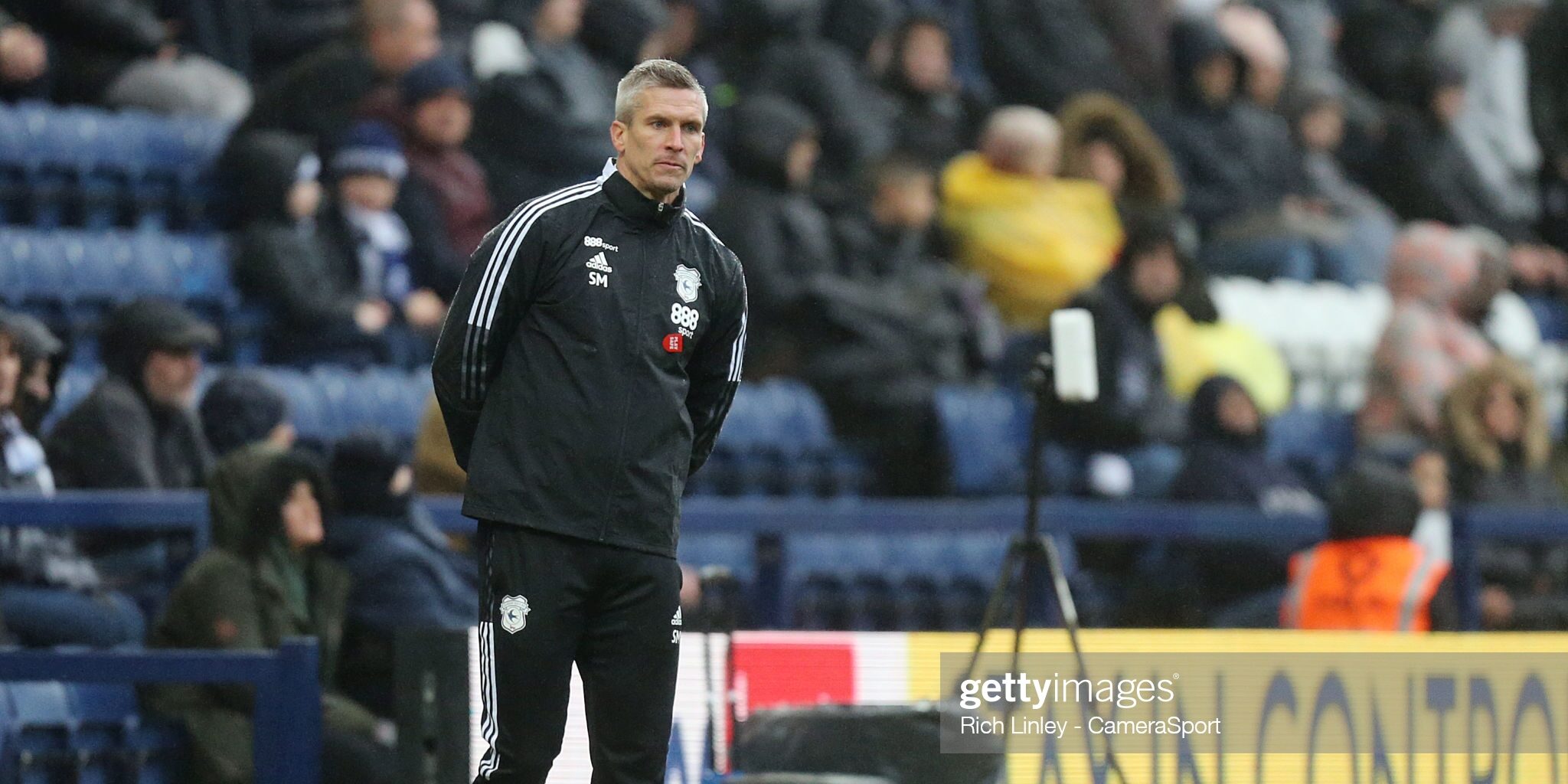 Steve Morison on the touchline against Preston. Pic: Getty Images.

Steve Morison has told his players to keep cutting the gap between Cardiff City and the clubs above them – including Swansea City.

The Bluebirds manager will be bidding to oversee a third successive victory when they welcome Hull City to the Cardiff City Stadium on Wednesday night.

Three more points would stretch Cardiff further away from the relegation zone and move them towards the clubs bunched in mid-table, including the Swans.

If their Welsh rivals lose at Barnsley, and Cardiff win, then there will only be three points between them.

“Hull have had a couple of great results, but so have we,” explained Morison.

“We’ll see what happens on the night. Whether this is Hull or anyone, it’s a case of getting those three points, keep the momentum and keep pushing up the league.

“We need to make Cardiff City Stadium a fortress. People shouldn’t enjoy coming to play here, and we should really enjoy playing here. We started that against Huddersfield, and now we need to continue it.

“I think the biggest thing is to give the fans three points at home again.

Since Morison has taken over, he has not been afraid to give youth a chance and in Kieffer Moore’s absence against Preston he gave a senior debut to under-23 goal machine Chanka Zimba.

“I pick the best eleven for each game, to do what I want to carry out, what the gameplan is. There always has to be a plan,” said Morison.

“ James Collins and Mark Harris both would have wanted to start the game on Saturday, but I decided to go a different way, but obviously there was a bigger picture.

Morison on Zimba: ‘It’s a big step up and Chanka found that out on Saturday. I think he lost the ball every time he got it, which he wouldn’t have done in the Under-23’s. It was a different level. Being able to give him the opportunity to learn in those 45 minutes is invaluable.’ pic.twitter.com/3k0RvR344r

“From my point of view, it’s what fits best for each game, for each moment, and I live and die by those decisions.

“It’s up to the players to go out and carry that job out to the best of their ability.

“We are all aligned in what we are doing. If they’re not playing, they train right. They all do it spot on, they’re professional, and everyone is a part of it.

“That’s what we’re trying to create here: a team, not a bunch of individuals.”

The former Wales striker has already shown he’s not afraid to make some big decisions as a manager.

Steve Morison loves this club. When it comes to managers, we wouldn’t have found one that understands Cardiff City more than him.

For the third game of his caretaker spell, he decided to leave out the captain Sean Morrison.

“He played the first two games. I rested him for the third game. I changed the team, not just him, a few players, four changes for the Huddersfield game.

“Mozza has been here for a long time and has been a great servant – he continues to be that. “He has been excellent around the training ground. Excellent around the place. Anything I need, I pick up the phone and he is the first person I call. He is a professional.

“He is not happy and he shouldn’t be happy. No one should be happy about not playing.

“If he was bouncing around the place because he is happy about it then something is wrong!

“But all the players are spot on. They are professional and everyone is a part of it.”

Both Cardiff and Hull are going into this game off the back of successive wins.

But, Hull boss Grant McCann says he’s looking forward to taking on a Cardiff team that has been rejuvenated by Morison.

“To win back-to-back games for the first time this season is great for us,” said McCann.

“It gets the monkey off our back a little bit.

“It means we can focus on the next one now, against a Cardiff team who seem reinvigorated in terms of a new manager coming in.

“It’s always tough, Cardiff away is always a tough game, but we will look forward to it.”