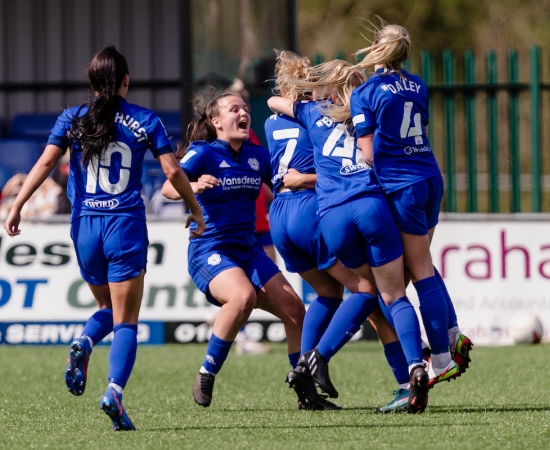 Bluebirds boss Iain Derbyshire was almost speechless after he saw two of his most talented teenagers secure a revenge win for Cardiff City ladies to end the season as FAW Welsh Cup winners.

The win overturned the defeat they had suffered against Cardiff met in the League Cup final and made it a hat-trick of titles for the Bluebirds this season with their U16 and U19 teams ending up as league winners.

It was Seren Watkins who lit the touch-paper in the 58th minute at the SDM Glass Stadium in Bridgend after she won the ball in midfield, powered forward and then unleashed a right footed shot that bisected two defenders and reached the left corner.

That broke the deadlock in a game that was tight throughout. Met came into the game as the reigning champions and having won four of their five previous games against the Bluebirds this season.

But their defence won’t want to see any re-runs of the Watkins goal with Charlotte Smith seemingly thinking it was going to go outside the post by the way she failed to react. Three minutes earlier she had seen City hit the post.

The second goal was fit to win any cup final as 16-year-old Lilly Billingham scored a screamer from the edge of the ‘D’ with her left foot. Even though she was falling backwards as she struck the ball, the ball rocketed into the top left corner and with only five minutes of normal time left there was now coming back from that.

“I’m speechless and emotional,” admitted head coach Derbyshire after the game. What a game, what a season!

“We have worked so hard for this and we will be back into work tomorrow after the celebrations to start planning for next season. There are so many good young players in Wales and they are the future of the game.”