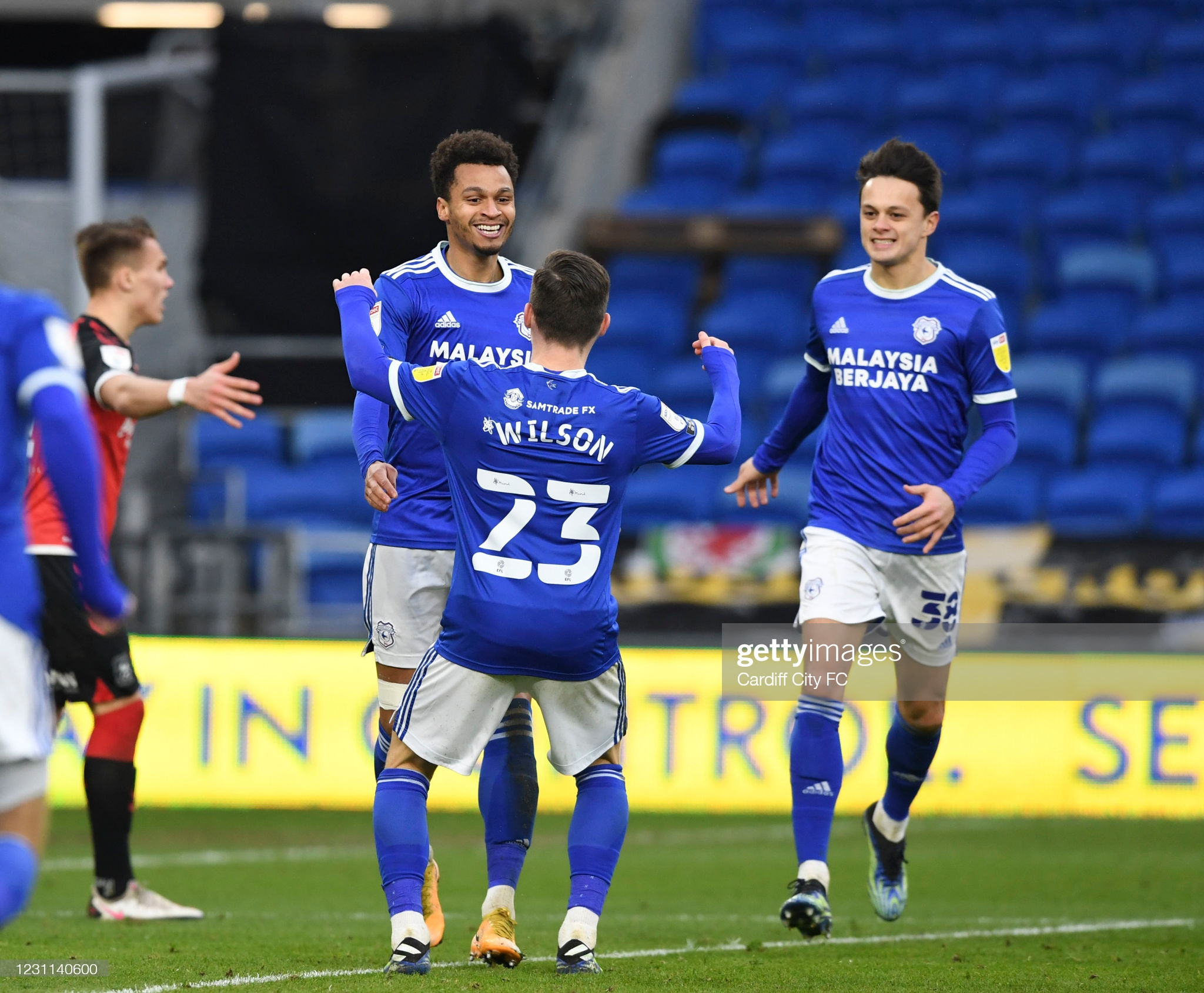 Josh Murphy celebrates with his team-mates after netting in the 3-1 victory over Coventry. Pic: Cardiff City FC/Getty Images

Mick McCarthy is refusing to get carried away after seeing Cardiff City move up to seventh in the Championship after an impressive 3-1 at home against Coventry City.

The Bluebirds made it three wins on the trot thanks to goals from the impressive Josh Murphy and a brace from in-form striker Kieffer Moore.

Since taken over as Bluebirds boss, McCarthy has taken Cardiff from 15th to within six points off the play-offs after taking 11 points from his first five games.

“We can’t start getting carried away with it,” said McCarthy. “Let’s see where we end up and if you keep winning games and picking up points, we’ll do alright.

“After beating Rotherham in midweek it’s been a good week.

“I am glad we are talking about the play-offs now rather than saying we had a poor performance and are near the relegation zone.”

The Sky Blues got a goal late in the second half thanks to Dominic Hyam but it was a fully deserved City victory with Moore again repaying that £2million fee.

The Wales international took his goalscoring tally to 13 goals after his first half brace.

Both goals very different from each other with the first goal coming from a brilliant defence play from Josh Murphy in his own half, then unlocked Moore down to the side and dumbed his defender and slotted the ball home nicely.

The second goal was more scrappy as a Will Vaulks long throw troubled the keeper and feel to Moore at the back post who tapped it in.

“I think we could do a replica of him. There’s only one of them and he’s always having to put a shift in every time,” added McCarthy.

“His first goal and Josh Murphy was significant in winning the ball back and he sees the benefit of that hard work and he was a great finish.

“I think the next one’s a bit of a tap him, but he’s getting us goals and it is nice to see when you get different ones as a centre forward tapping, headers, right foot left or whatever it might be mixing them up is playing well Kieffer.”

Another stand out performances was the out of favour Murphy under Neil Harris, but since McCarthy arrival, he has become a new player and his goal against Coventry showed that.

“I was a little bit frustrated. They were passing the ball. We weren’t we were getting out of shape and they were playing through us.

“We weren’t passing the ball particularly well. I didn’t think we’d get in well enough. But you know, at the end of it, we got the goal and goals do change the course of games, which is what happened.”

Murphy replaced the injured Sheyi Ojo, but his word class pass on Tuesday night for the Joe Bennett winner against Rotherham gave him the chance to start.

“Yes, we have a knack of getting the best players to be honest with you,” said McCarthy, who has made an immediate impact with long-time assistant Terry Connor. “Giving them a bit of a belief a bit of confidence.”

“Even though he wasn’t playing I spoke to him explained the reasons why and every time he’s come on the pitch, he’s had an impact and certainly starting today he’s had a real impact.

“He’s got real quality, some of the things he does and the pass he found on Tuesday night in Rotherham, I have to be honest when he hit it, I was what the hell has he done now then wow great goal.

With McCarthy arrival, the Bluebirds have adapted to a different system by playing with three central defenders Curtis Nelson, captain Sean Morrison and Aden Flint.

All three defenders put in a brave performance, but Nelson stood out after his impressive blocks which most of them he took to his chest.

“He was a bit of a punching bag but I always like that. It’s what we do, you know, I include myself, us big nuggets who header it, kicking and blocking and stopping the ball going in the net.

“That’s what they’re getting the pleasure of doing. It was particularly good again today.”

One thought on “Cardiff City Up To Seventh….But We’re Not In Football Heaven Yet Says Mick McCarthy”