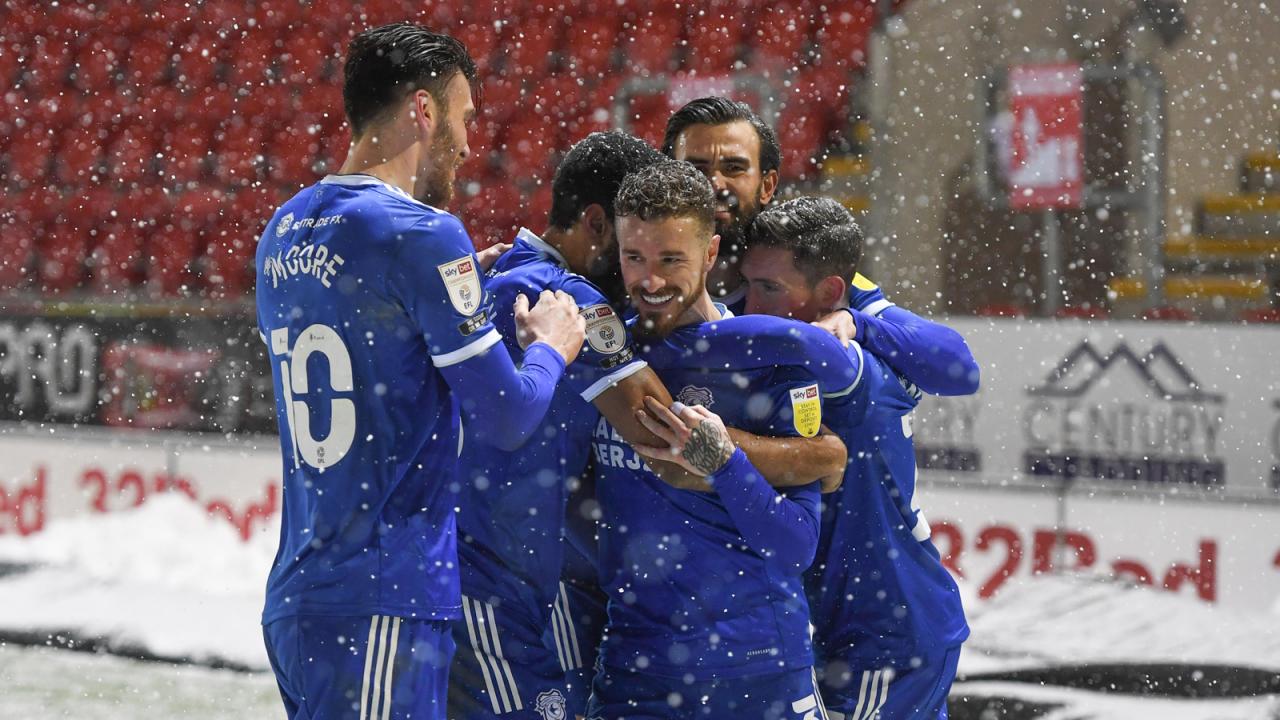 It's all smiles for Cardiff City as they celebrate Joe Bennett's late winner at a snowy Rotherham United. Pic: Cardiff City

Mick McCarthy hailed Cardiff City’s fighting spirit insisting they can start looking up the table after a 2-1 victory at Rotherham United maintained their unbeaten record under him.

Joe Bennett’s late winner after Sheyi Ojo’s opener had been cancelled out made it back-to-back away wins for the Bluebirds.

And it is now four games unbeaten since McCarthy took over from Neil Harris, lifting the side to 11th in the Championship table eight points off the play-offs.

“The squad I’ve inherited has quality in it, but we’ve had to show fighting spirit,” said McCarthy.

“We should be sneaking up on those in front of us as opposed to looking behind us.

“I think they believe that. In this league you can only show your quality if you wind the scrap first.”

Ojo – whose form should surely lead City to try and make his loan deal permanent in the summer – put them ahead three minutes before the break.

The Liverpool loanee struck after being put clear by Harry Wilson who has had a major impact since initially being left-out of the starting line-up by McCarthy.

United are one of the form sides in the division – making the away win even more impressive – and thy duly levelled on 62 minutes when Matt Crooks tapped home.

As conditions got worse – making playing flowing football difficult – a yellow ball had to be used for the final 15 minutes at a snowy New York Stadium.

But left-back Bennett’s header from sub Josh Murphy’s excellent cross earned a vital three points that must surely end and talk of City being dragged into a relegation battle.

Victory at home to Coventry City on Saturday and McCarthy’s men can maybe start thinking of a push for that top six spot which looked Mission Impossible just a few weeks ago.

Dillon Phillips started against Rotherham with keeper Alex Smithies still recovering after the mystery illness that forced him off against Bristol City last Saturday.

“I’ve exchanged message with Alex and he’s feeling a lot better,” added McCarthy who also gave an update on other injury issues.

“Joe Ralls rolled his ankle and we’ll see how he reacts. Jonathan Williams was also much better today. Leandro bacula hurt his calf when he went on at Bristol City. It tightened up.”