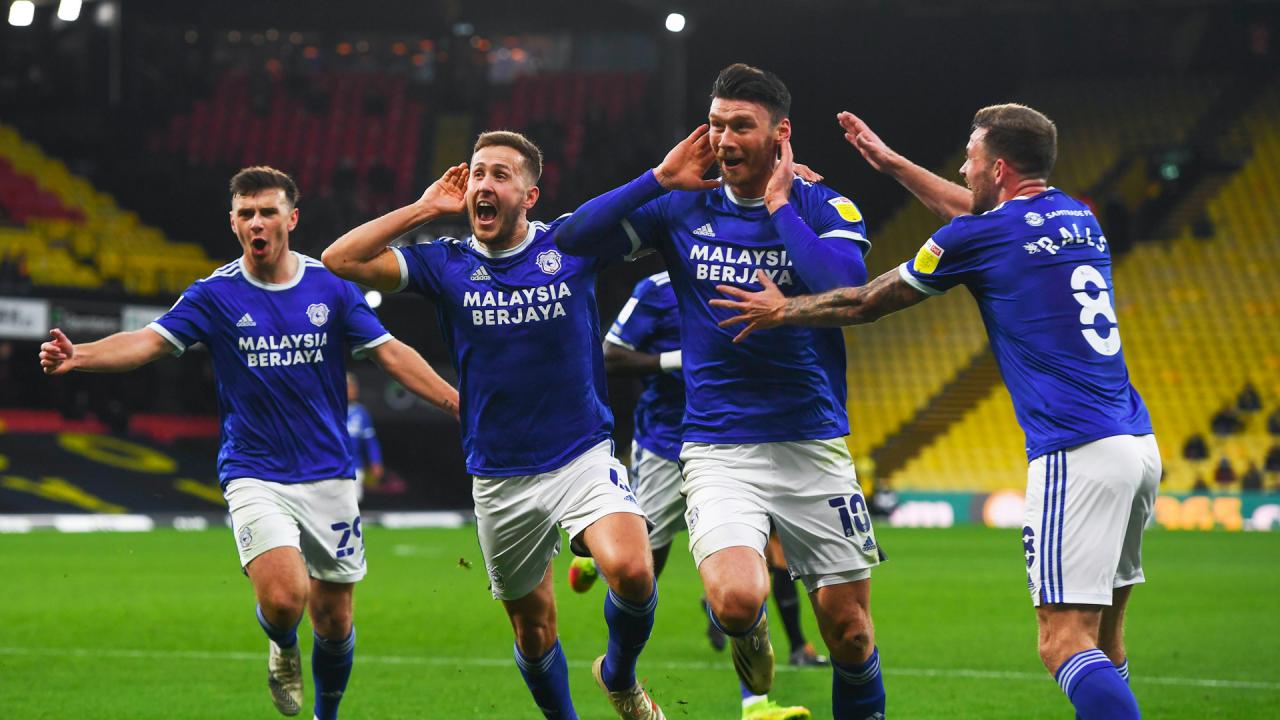 Neil Harris hailed Cardiff City’s 1-0 victory at Watford as one of the most enjoyable displays of his reign as his side quietened the returning fans.

The Bluebirds chief has complained beforehand that his side would be at a disadvantage as Welsh government COVID-19 measures would not allow fans into home games.

But the 2,000 supporters allowed into Vicarage Road witnessed a stunning City performance with Kieffer Moore bagging the winner to make it five goals from five games.

The win was City’s third in a row – without conceding a goal – and comes after Harris was under pressure before the victory over Luton just seven days ago.

“I thought Luton last week was a huge performance because of the scrutiny, Huddersfield was even bigger,” said Harris who thrashed the Hatters 4-0 and then beat the Terries 3-0.

“But to come here and perform like we did in the first half and hold on, it’s a big result… probably one of my most enjoyable in charge.

“We have won three on the spin and found that clean sheet mentality and look like we have lots of ways to score a goal.

“It was a great boost having fans here and I am really pleased for them, it was nice to play in a stadium with some atmosphere.

Three wins, three clean sheets, but that’s only half the story. Just like that, Cardiff look back in business. They were a threat in attack and rock solid in defence. They’ve fixed their deficiencies at both ends and the confidence has come flooding back. Good for you Neil Harris

“Having seen the noise 2000 fans can make, it would be great to have fans back at the Cardiff City Stadium.”

Moore fired home a decent first-half volley after the Hornets failed to clear a corner as City rose to 11th and with the South Wales derby against Swansea City on the horizon.

Harry Wilson was denied from adding City’s second after the break from Joe Bennett’s by Ken Sema but Watford still suffered their first home defeat of the campaign.

Domingos Quina was denied by an excellent save from Alex while Stipe Perica headed over from a few yards out as time ran out on Watford.

Harris hailed the all-round contribution of Wales striker Moore and his blossoming partnership with Mark Harris.

“Kieffer’s not just about goals, but he’s lethal at the moment,” added the City chief.

“We’ve done a lot of work with him on the training pitch about his positional play, around balls in the box and second balls.

“He’s in that vein of form at the moment where the ball tends to find him, and we hope that continues.

“I think he can adapt to play in a pair, or in a 4-3-3 where he’s down the middle on his own, because he’s got the ability and a good all-round game.

“He can link the play with his chest or his head, and bring other players into play. With Mark Harris alongside him, I thought it was an excellent combination again today.

“We’ve come to Watford, who I think we can all appreciate are a really good side, and they’ve had one shot on target all game.

“That’s testament to the group, and their defensive mindset. It’s a whole team mentality to keep a clean sheet.

“You can see the work ethic of the front two; they’re the first line of defence.

“The way we press and the sprinting capacity we’ve got is hugely important. We’ve tightened up, and credit certainly goes to the goalkeeper and the four lads in front of him.

“As always, my message to the players was clear – ‘Well done for today, but it’s now all about Tuesday’.

“We go to Stoke, which is another tough one, and then just the small matter of the South Wales Derby next Saturday.”