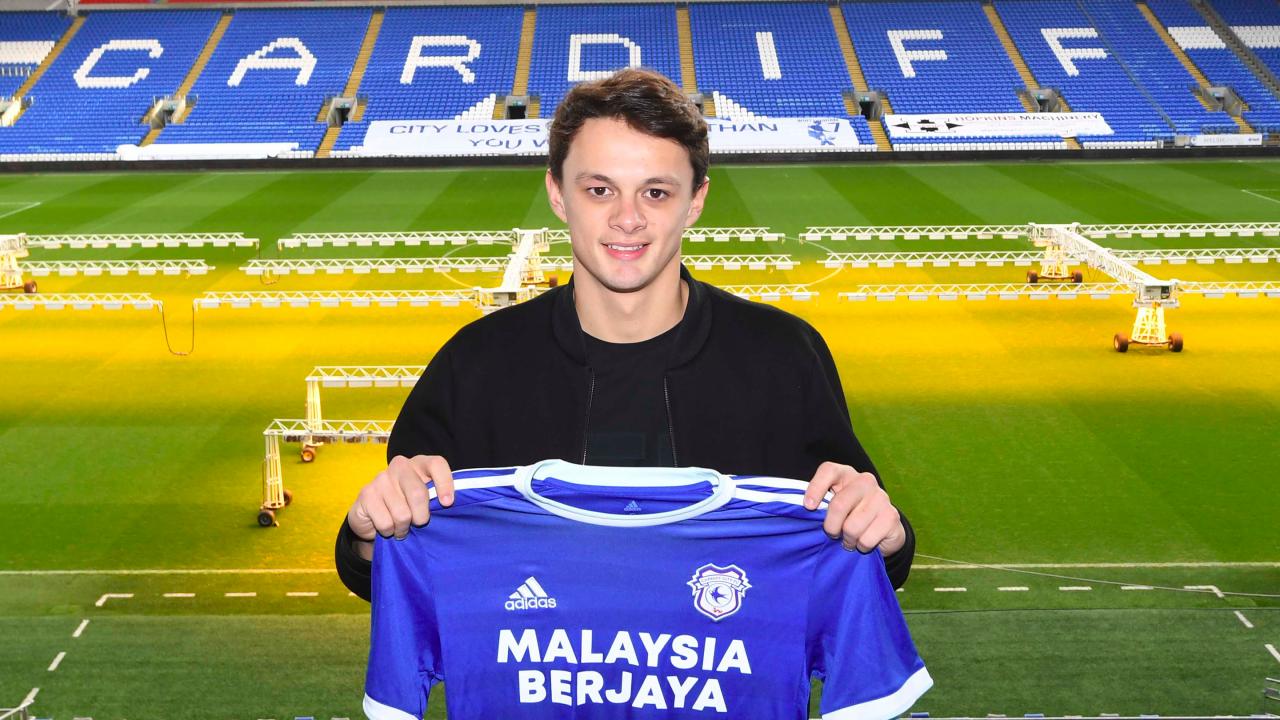 Neil Harris confident right-back Perry Ng can step up to the Championship after his arrival was confirmed. Pic: Cardiff City

Neil Harris is happy with the transfer business Cardiff City have done so far this week – but knows he has to start repaying the club’s backing with wins.

Right-back Perry Ng from Crewe and Crawley striker Max Watters have added to his options as the Bluebirds face QPR at home on Wednesday.

“Fantastic to get Perry and Max both in over the last 72 hours,” said Harris of the arrival of the duo.

“Two young players that we hope have got really bright futures. It’s great to be able to bring them into the club.

“We never envisaged we were going to have Jordi (Osei-Tutu) out for four months, or the situation with injuries at centre-half as well.

“Being able to get a right-back in has been the main aim. To get Perry in, a player we have chased for so long in so many windows. I am really pleased to get it done.”

Ng, 24 was the Railwaymen’s skipper and his arrival will be a boost given the injury situation surrounding Osei-Tutu.

“Firstly, we are getting a good character,” added Harris. “A club captain of a side at 23. There is some leadership there at a young age. Some voice and presence and a boy who has played a lot of league football for a 24-year-old.

“I’m sure he will adapt to the level, as will Max, he can pass the ball, get up and down the pitch and end product.”

Cardiff has also signed Watters who the best goal per 90 minutes in league two record this season with 1.14 and Harris is impressed by what he has seen from the 21-year-old.

He added: “Hunger to do well. Wants to improve, wants to learn. He is asking questions about how we play and what I expect from him.

“He knows where the goal is, that’s for sure! You can see why he has scored goals this year, he is a natural finisher.

“Max, we need to be patient with him, me more so than anybody. But certainly, looks really positive signs in the first few days.”

City will be hoping to end their five games without a win record which is the longest winless form since 2018 when they were in the Premier League.

And Harris knows three points will be vital given the backing he has received from the club with the recent signings even though the jury is still out over his position at the club with fans.

Good luck Perry! I think this is a move that suits everyone.

“There is always speculation,” he added. “When you’re not winning games, I understand that and take responsibility for that.

“I can talk about injury and things like that, but we need to win games of football, that appeases people.

Cardiff are still in the market this transfer window as they are trying to sign a few more players to add to their squad though that could also mean players being moved out.

Harris has confirmed Bournemouth’s Jack Simpson is a player they are interested in amid speculation the defender is not keen on a move.

“He is a Bournemouth player,” added Harris. “I am not going to talk too much about someone else’s player. We have made an enquiry, but I will leave it at that.”

Murphy has been linked to several fellow Championship clubs including Sheffield Wednesday but no deal seems imminent yet.

Harris added: “Enquiries, yes. Anything realistic, no. At the moment, Josh stays a huge part of it.

“Josh is a player we have spoken about before, having not had a lot of game-time and is naturally someone who might need some minutes.”

Murphy joined the Bluebirds in 2018 making 69 appearances for the club and scoring eight goals.

“Josh has trained really well and continues to train well. He played against Nottingham Forest in the FA Cup and didn’t quite have the impact in the final third, but I was really pleased with his application and performance. So, at the moment, no, nothing in that.”

The squad will not just be boosted by two new signings, but by the return of injured players.

Harris confirmed: “We saw Kieffer coming on and play some minutes. We did rush him a little bit on Saturday because needs must.

“We have had to be day by day with him and we will have to see how he is tomorrow to see if he can play more than half-an-hour.”

“Sean Morrison is getting closer, if it’s not tomorrow then definitely next week. Aden Flint is training.

“Lee Tomlin is getting closer all the time. Marlon Pack is missing through suspension. We are getting healthier and getting players back.”

The Bluebirds will be hoping to see last season player of the season Tomlin back in action soon, having not been seen in a City shirt since 31 October.

“He has been a huge loss for us,” admitted Harris. “When you haven’t got the biggest squad, only 20 senior players, any player or two players in a single position is a huge loss.

“But Tomlin in particular was a catalyst last year, the maverick who got us back up the table.

“I’ve not spoken too much about it but getting him back fit for 10 games or 15 games will be a massive boost.

“He has got the ability at this level to find a pass, magic to score from nothing, genius from a set play. Having him back, he has got a way to go.

“We are hopeful he will be back within four weeks, playing in the squad. Can we shave some time off that? I’ll be pushing for that.”