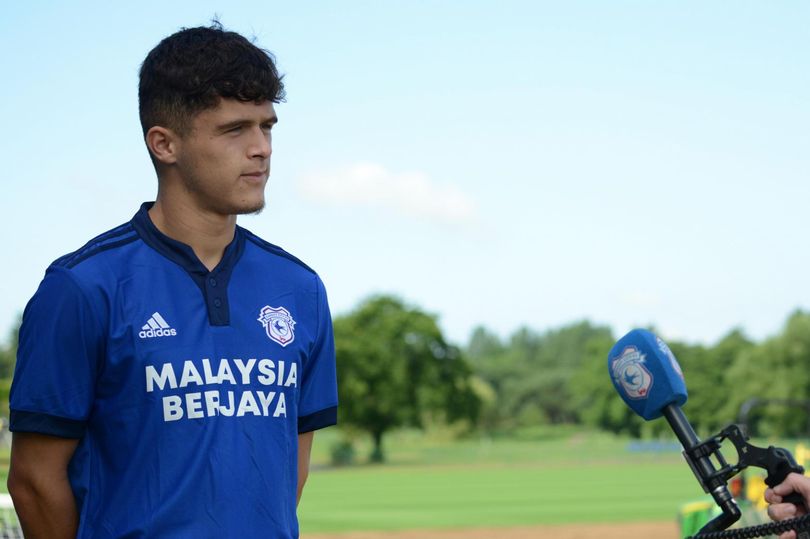 Forget Kieffer Moore for a minute, or fellow Wales Euro squad man Rubin Colwill, the Cardiff City player who has caught the eye in pre-season has been Ryan Giles.

Now, the 21-year-old winger will be hoping to continue to make a firm impression by helping the Bluebirds to an opening win of the season in their first fixture at home to Barnsley on Saturday.

Giles – a name older Cardiff fans will recall with affection when they think of another wide man who wore blue, namesake David “Gilo” Giles – plans on getting returning Bluebirds supporters off their seats this year.

He has a lot of work still to do but is set to be a key man for Mick McCarthy’s Cardiff side in the campaign to come despite his tender years.

“I like to run at players, get past players, and score and assist. That’s something I enjoy when playing out wide,” said Giles, who is set to start on the right side of Cardiff’s attack this season.

“I want to play my part and I can play in multiple positions.

“I’ve played in the wing back role before and that’s where I played the majority of my games last season, but ultimately I enjoy attacking.

“I played a lot of games in the Championship last season so I know what the division is about but the only thing I haven’t experienced is having fans.

“This past year has made everyone realise how important they are to the game. Football is not the same without them. I can’t wait to get the Cardiff fans behind me.

“Wolves is my hometown club. Football is a crazy game but playing in the Premier League is something every young player wants to do. That’s where my sights are set too.

“To be able to do it for Wolves would be brilliant because it’s a club I’ve been at since I was eight years old.

“That’s a long-term target but at the moment I’m at Cardiff which is a massive club and we’ve got a massive challenge on our hands.

“In order for me to get to where I want to be – and that is the Premier League – I have to make sure I do the right things now with Cardiff.”

Giles has impressed in past loan spells at Championship sides Coventry and Rotherham where he has mainly played as a wing back.

But veteran boss McCarthy is set to unleash the young tyro as a right-sided attacker from where he can cut inside on his favoured left foot.

It will be the first time they have watched a competitive Cardiff home game since the pandemic began.

They will finally get the chance to pay tribute to Bluebirds legend Peter Whittingham who tragically died last March.

“I was only a young lad in the academy when Mick was manager at Wolves, but to get the chance to play under him now is brilliant,” said Giles.

“He’s a fantastic manager. I’m hoping his and Terry Connor’s experience of helping young players over the years can also help me. I can’t wait for the season to start and to work under them.

“I want to hit the ground running.”