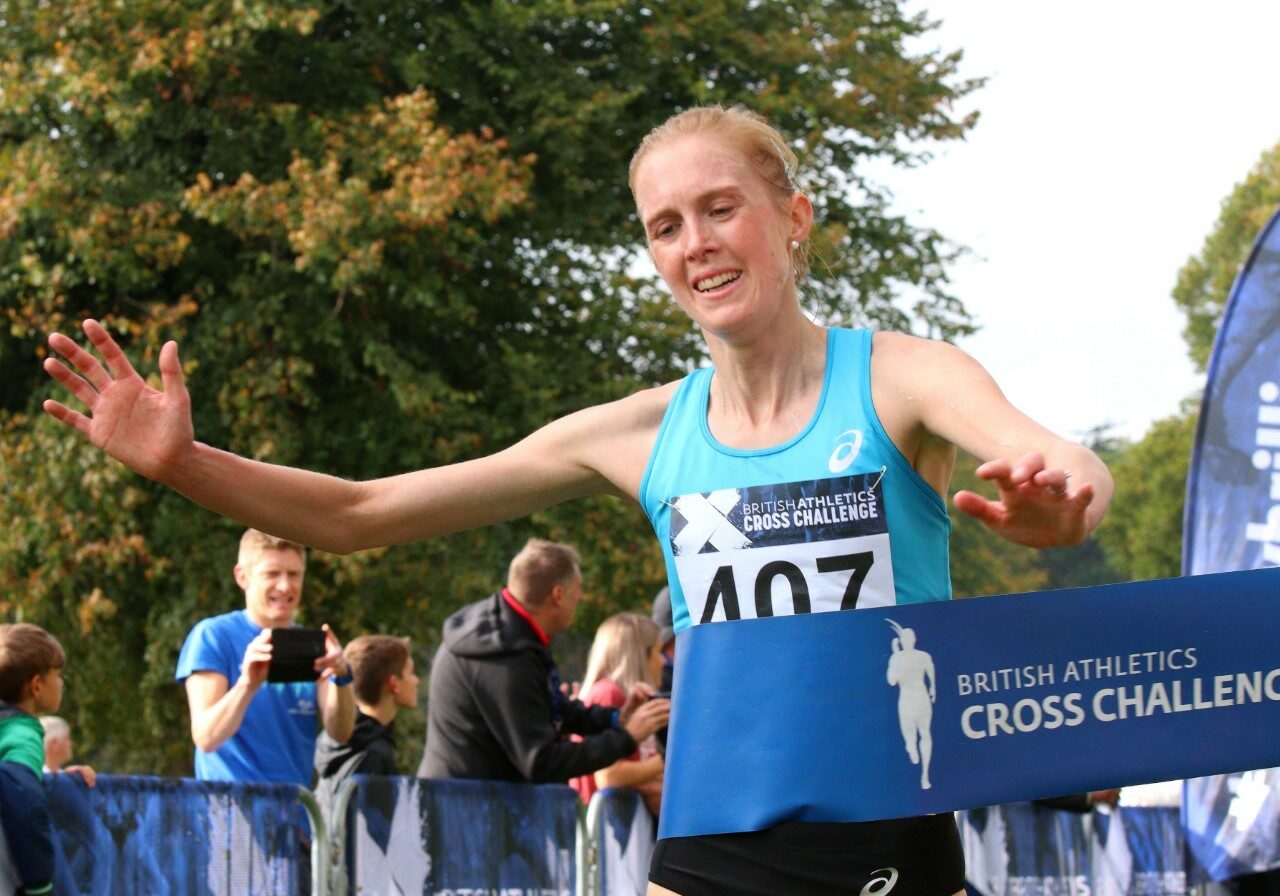 Charlotte Arter continued her fine form over cross country and the road in Leeds.

The sun came out to celebrate the event’s elevation to global standard and training partners Arter and Nesbitt rose to the occasion in the most un-cross country-like warm conditions.

Nesbitt, who has been training at altitude in France, led the field early on, but it was 2019 winner Arter who eventually took control in the closing stages of the 6.4km race to take the win in 20.11 – four seconds ahead of her countrywoman.

Arter has been in spectacular form this year, especially in her home city where she also set a new Welsh 5K record on the roads of Whitchurch in August .

Delighted with her latest success, Arter said: “Wow! That was tough. Jenny really made that a tough race, it was fantastic battling out with her throughout .

“She really took it on from the start and I was honestly hanging on, but just had a little bit extra in the finishing straight.

“It’s so great to be back doing cross country. We’ve been two years without it and its the purest form of racing.

“It’s not about time it’s just racing who’s  there on the day It’s amazing to be back in Cardiff racing cross.”

Commenting on the unseasonably warm weather and dry conditions underfoot, Arter said: “As I’m speaking to you I’ve got sweat in my eyes, I can’t see!

“It was really firm ground, that was practically like a road race, which I actually think I prefer.”

As well as kicking off the new World Athletics Tour, the event was the first fixture of the British Athletics Cross Country Challenge, which also features races in Milton Keynes, Liverpool, Belfast and Loughborough.

So happy cross country is back! Chuffed to get the win yesterday @CrossCardiff. Fab event as always! @ASICSeurope @WelshAthletics https://t.co/0wYV8w3T5N

Two years ago, Arter followed up her success in Cardiff by finishing second in Liverpool, which doubles as the Great Britain trials for the European Cross Country Championships.

Arter went on to win a gold medal alongside Nesbitt at the Europeans in Portugal as part of the GB women’s team.

The 30-year-old is hoping to repeat her history of  success in Liverpool, which saw her win in 2018, and book her place at this year’s European Championships in Dublin at the end of this year.

Arter said: “Liverpool’s in a month and anything can happen with the weather in that time, so fingers crossed it’s like this.

“The main aim this winter is to qualify for the Europeans. Hopefully things stay as they are (regarding COVID) and Dublin goes ahead and it’s a case of trying to get as far up the fields I can.”

Arter was also thrilled at winning the first World Athletics Cross Country Tour event of the season with Cardiff having been added to the calendar earlier in the week.

“It’s really exciting,” said Arter. “I think in years to come the fields attracted here will grow to be really exciting. We could get some of the top athletes in the world coming to Cardiff to race cross country which I think is amazing.”

The men’s race also saw an exciting finish where Milner hung on to beat Birchfield Harrier Omar Ahmed and Cardiff’ Athletics’ Jake Smith to the line.

Along with Zakariya Mahamad, the trio had opened up a gap over the rest of the field by the end of the first lap of the 9,600m course.

And they stayed away from the rest of the pack for the remainder of the race to battle out the podium places between them.

But it was Milner who best used to slope down to the finish line to his advantage as he crossed the line in a super fast time of 27.18 with Birchfield Harrier Ahmed just behind in 27.20 and Smith third in 27.29.

Like Arter, Milner found the weather as hot as the pace on the fast Cardiff course. “It must have been 18 or 19 degrees today and I just wasn’t prepared for it. I got to about two miles to go and overheated massively.

“So I just tried to stay consistent but I thought I was going to get dropped by Jake and Omar.

“I kept going and had something left on that last two hundred to come past, which I was actually quite surprised about  because normally I don’t win sprint finishes.”

Milner was also thrilled to be a winner on the World Athletics Cross Country Tour and praised the Cardiff event. “It’s amazing. The last time I did the Cardiff Cross Challenge was five years ago, when I was under 17. I went to America for four years and this is the first time I’ve come back and run it.

“It’s a new course, I didn’t recognise it at all. I really enjoyed it. It’s a really good, normally I prefer a lot more hills and mud, but I was getting my splits and averaged about 4:46 cents per mile. So on a cross country course that’s pretty rapid!”

The event also featured a full timetable of age grade races from under-11s upwards with Ireland’s Dean Casey won the under-20 men’s race over 6400m in 18:34.

Megan Keith, was a convincing winner of the combined under-17/20 women’s race with fellow Scottish athlete Louisa Brown second in the race outright and as the first under-17. Benjamin Peck, of St Edmund Pacers took the under-17 men’s race.

Hundreds of club runners from across south Wales and the south west of England also took part in the day’s racing across the age groups as the event also incorporated the first fixture of this year’s John H. Collins Gwent League.

Results from the Cardiff Cross Challenge are available here. Full John H Collins Gwent League results will be available on the league’s website.