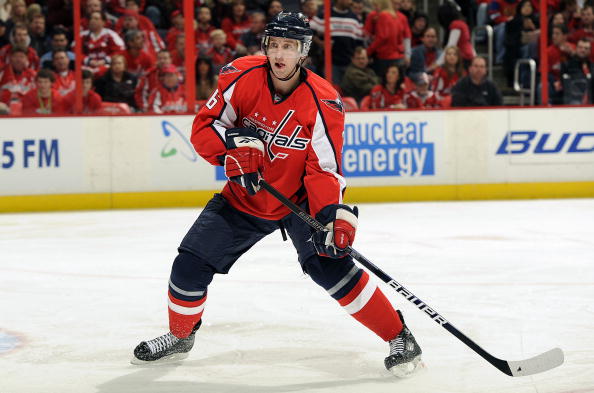 Shaone Morrisonn #26 of Washington Capitals skates down the ice against the Florida Panthers. (Photo by G Fiume/Getty Images)

Cardiff Devils have signed defenceman Shaone Morrisonn, a veteran who made than 500 NHL appearances, for the rest off this season.

Devils Head Coach Andrew Lord spoke about bringing in Morrisonn: “This is a hugely exciting signing, not only for our organisation, but also for the league,” says Devils coach Andrew Lord.

“Shaone brings a bunch of experience having played in the highest leagues in the world.

“He will add a lot to our team. His skating ability for his size is extremely good and a big strength of his game. His defensive abilities are solid, while his awareness and skill will help our team in all three zones.

“I’ve known of Shaone over the years through mutual friends and it was great to meet him this summer and get to know each other more. We thought we were close this off-season to signing him, but he had some things to attend to back at home in Vancouver.

“He has been skating in Zagreb over the last six weeks and was pleased to hear the other day that he was ready to potentially join our team.

“To get this over the line last night was extremely exciting.

“I’d like to thank Steve King (Devils owner), becauase he initially brought up Shaone’s name in the off-season and got the lines of communication going.”

Morrisonn, aged 36, played more than 500 games in the NHL, 480 regular season matches and 27 in the playoffs, mainly for Washington Capitals.

He was originally drafted in the first round by Boston Bruins, 19th overall and started his NHL career with them in 2002-03. After two years with Bruins, he was traded to Capitals where he spent the next five seasons.

His final year in the NHL was spent with the Buffalo Sabres in 2010-11 before moving overseas to play in the KHL where he was part of the Zagreb team that came to Cardiff in August 2016 to play Devils during pre-season.

Norisonn spent three years in Zagreb before finishing his time in the KHL with Vladivostok in 2017-18.

Last season Morrisonn suited up for the Oji Eagles in the Asia League.

He is a Croatian passport holder and in April he played for their national team in Division Two A of the World Championships and was voted top defenceman of the tournament.

Devils match against Glasgow Clan away on Wednesday evening is being broadcast live on FreeSports, a game the current league leaders against defending play-off champions Cardiff.

Lord takes his team to play Manchester Storm on Saturday, while Fife Flyers visit the Viola Arena on Sunday.