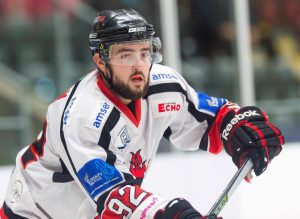 Cardiff Fire have added five players to their ice hockey roster for the 2018-19 National League season.

Their opening fixture is against Basingstoke Buffalo at Ice Arena Wales this Sunday and Fire are planning a big push for honours.

Prolific goalscorer Deacon is Fire’s player/manager and has been part of the club since it was formed. He has scored 300 points (108 goals/192 assists)  in 279 matches at NIHL and English National League levels.

Apart from one season playing for London Raiders, the 32-year-old Deacon has spent his entire career playing in Cardiff and helped Fire win two League titles in 2015-16 and 2016-17.

Tough utility player Wilkinson has been with Fire from the start and has, apart from one season in Romford, played for NIHL/ENL teams in Cardiff since 2004.

Wilkinson can play as a defenceman or a winger and brings a lot of league experience to the line-up. He has amassed a 1,208 penalty minutes, more than 20 hours, in 167 matches, while he has been a point-a-game D-man over the last two seasons in NIHL Two.

Swindon-born Great Britain international Jackson Price is back with Fire, having joined them from Wildcats two years ago. He was on the GB roster in the universiade games, playing in all five games for his country.

Price is a tenacious centre-man who works hard for his team and played for the Fire’s NIHL One team last season, finishing among the leading scorers.

Highly-skilled forward Powell, who made the step up from junior hockey at the age of 16, returns to the Fire line-up and keen to continue making an impact.

Cardiff-trained Powell has been ever present in Cardiff’s NIHL/ENL team over the last 10 years despite being only 26 years old.

The speedy winger is known for his physical style, always finishing hits, playing with good aggression and a forward just as comfortable on the powerplay as penalty kill.

In the past few seasons Powell has really added numbers to his game, finishing as Fire’s Division One top scorer last season.

He has twice stepped up to Elite League hockey, once with Cardiff Devils and on loan to Manchester Storm in the League Cup.

Haslam, Fire’s 23-year-old centreman, is back with Fire having spent his entire career in Cardiff.

He first broke into the ENL/NIHL teams at the age of 16 and went on to become a full time senior player playing in Divisions One and Two for the Cardiff NIHL/ENL teams.

Haslam played solely in Fire’s Division One team last season, playing in all special team situations. He has a reputation for scoring crucial goals at critical points in the game, has great speed and a good face-off percentage.

Fire have one team playing in NIHL Division Two South and they open the campaign with back-to-back home fixtures at Ice Arena Wales.

Basingstoke Buffalo are in Cardiff Bay this Sunday, September 23, while Slough Jets are at the IAW on Sunday, October 7.

Fire have big ambitions for the new season and they have appointed former Slough Jets and Invicta Dynamos goalie Douglas as head coach.

Douglas, aged 39, has represented teams all over Britain including Hull, Peterborough, Romford, Swindon, Haringey and Bracknell in the second tier of British hockey.

Over the past two seasons, Douglas has played in Slough for the Jets, won the NIHL Two all-star goalie of 2017-18 and is intent on playing for Fire this season.

Former Devils defenceman Smith is Fire’s head of player development, while Cuddihy is director of hockey.

There are still more players to be announced by Fire, including one or two imports.