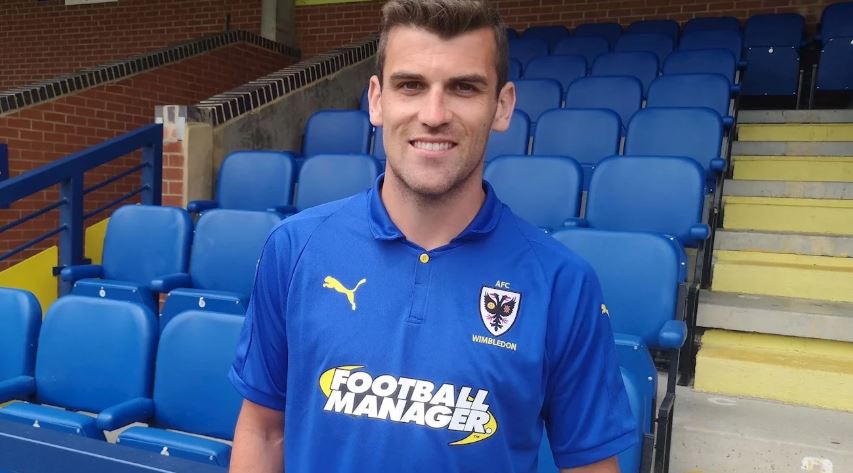 Adam Roscrow will be playing in League One next season. Pic: WFC.

The 24-year-old has moved on a two-year deal after firing the Archers to the Nathaniel MG Cup final and into Europe last season.

It means he will miss out on the club’s Europa League adventure when they head to Luxembourg to play in the first leg of the preliminary round against FC Progres Niederkorn on Thursday.

Instead, he will be taking his first steps in trying to make the grade in League One.

But Roscrow said: “I’ve finished all my studies and I’m graduating in the next few weeks.

“I could have been playing in Europe, but I think this is going to be the right decision for me.”

Roscrow, who has just completed a masters degree in coaching and pedagogy, netted 15 goals in 25 WPL appearances last term.

He has been widely tipped to break into the Football League and had been linked with clubs in both England and Scotland throughout the season, including a brief trial with Motherwell.

Having signed for Wimbledon, he added: “I did a bit of research into the club and it has had its setbacks, had to build itself up, and I think that resonates with my background.

“I’ve come from way down the Welsh leagues with Cardiff Met, achieved promotions, and we built on that by getting into Europe. This has come at the right time for me.

“I’ll be playing for a manager who understands the way I play. It feels amazing, if a bit surreal.”

Wimbledon manager Wally Downes is hoping Roscrow can add extra firepower to his squad who just managed to hold onto their League One status last season on goal difference.

“Adam is a bright kid and it was his decision not to be a professional footballer and to continue with his education. He has also scored a hatful of goals,” said Downes.

“He has got all the attributes that you want in a striker – he’s mobile with an eye for goal and he works hard when you don’t have the ball. He will be a definite threat next season.”

Roscrow played a key role in helping Cardiff Met navigate their way from the lower tiers of the Welsh game culminating in last month’s historic WPL Play-Off final victory, which secured the club a place in the Europa League qualifying rounds for the first time.

The time for Roscrow to make the move appears right. Last season, he looked the sharpest I’ve seen him look as a Welsh Premier League striker and he turned in some explosive performances, scoring nine goals in 10 games during one particular run, as well as hitting all four goals in Cardiff Met’s 4-0 win over Llanelli.

Roscrow has the pace, strength, movement and composure that is needed to make the step up to a higher level and it will be fascinating to see how he adapts to life in League One with the security of a two-year contract.