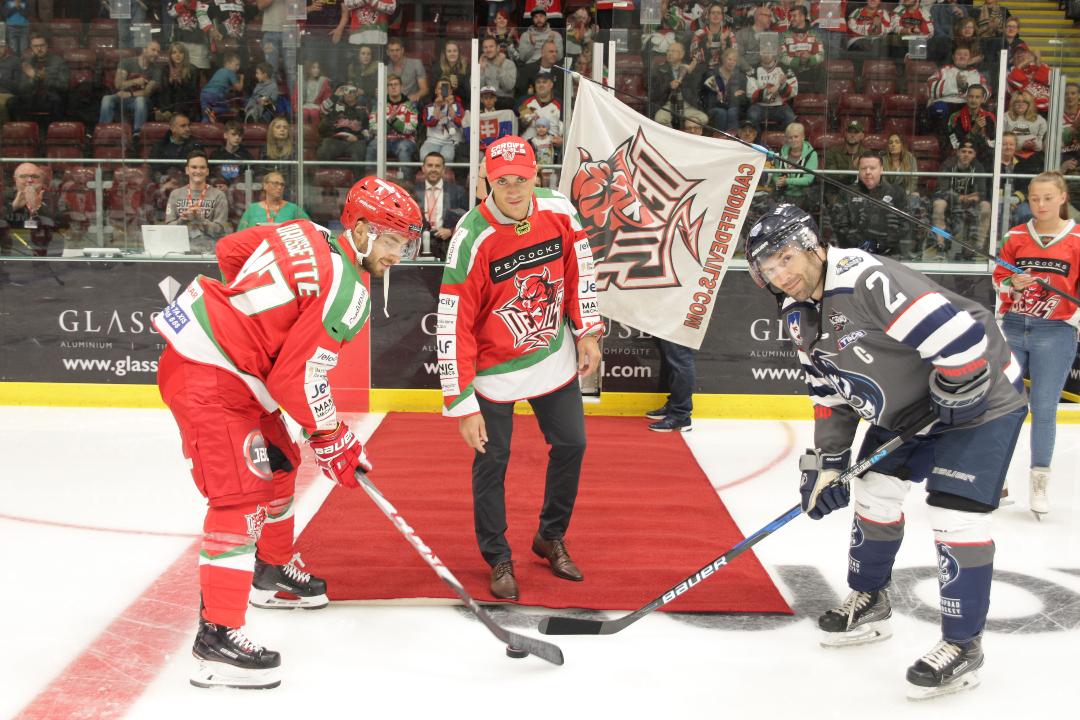 There was a shock in story for Tom Parisi when he arrived at Ice Arena Wales for the first time.

The American defenceman, Cardiff Devils final signing for 2018-19, was handed a team shirt with his name across the back, a coat which was far too big for him and a red baseball cap.

He was announced as a surprise guest to carry out the pre-match ceremonial puck drop and was accompanied by long-serving Devils club man Neil Francis.

When Parisi reached the ice he took off the coat and strode out to meet Devils captain Jake Morissette and HK Poprad’s Stefan Fabian.

He was announced as Devils’ final signing and home fans loudly registered their delight.

“It was a shock when Todd Kelman told me I was doing the puck drop, but I was delighted to do it,” said Parisi, who landed at Heathrow around 11am on Sunday morning and arrived in Cardiff Bay at 2.30pm.

Parisi, at 5ft 11ins, isn’t far from the biggest D-man on the Devils team, but he looks certain to be among the fastest and smoothest skaters in Elite League.

That’s a big statement when you consider Cardiff already have Gleason Fournier, a Canadian whose smooth skating scares the life out of opponents, in their line-up.

“Skating is my strong suit,” says Parisi. “That’s what has enabled me to have success in my career so far. I have vision, a hockey IQ and I’m a two-way defenceman.

“The bigger pad at Ice Arena Wales certainly helps in the way I play – I like to use my feet quite a bit.

“This is a great opportunity. I’ve heard some really good things about the Devils organisation and I’m excited about playing.

“I didn’t know anybody in Cardiff when we started talking, although a kid on my team last season knew about the Devils and owner Steve King.

“I spoke to coach Lord and we sorted things out.

“Cardiff are successful. This is a successful environment and that breeds fun. I want to be part of something special and Devils are special.

“They are right up there and now we have to stay there. We’ll keep working as a team and as individuals to improve as the season progresses.”

Parisi, 25, was captain of Providence College when they won the NCAA championship in 2015 and says: “The IAW is similar to the rink at college. It takes me back to the good old days.

“I felt a little nostalgic seeing this building and it brought back memories from college.

“I excited to be in Wales. The Devils fan base is crazy in a good way and that makes it fun for the players.

“I was given a great welcome by the team and I’ll get to know everybody a little better ver this week.”

Parisi is from Commack, New York and signed a two-year entry level contractor with NHL organisation Montreal Canadiens after attending a training camp.

Coaches at Providence described him as a player with: “Terrific hockey sense who makes smart, heady decisions in transition and skates well.

‘He’s not overly physical, but has a good stick and good gap control. Has great vision.”

Parisi joins Devils after spending last season with the American League Laval Rocket, the top affiliate for the Montreal Canadiens. That was his second season as a pro and both were in the AHL.

“We expect Parisi to be a force in Elite League,” says Devils head coach Andrew Lord, “He is one of the best skaters we have looked at over the last few years and his teammates said he was the fastest guy on their team last season, which is something for a young guy in the AHL.

“He had a great college career with Providence and is a proven winner. He is here to take his MBA at Cardiff Met University and to win trophies.

“That’s why he chose Cardiff over a few other EIHL teams chasing him this summer.”

Parisi will wear number 6 for Devils and will make his debut next weekend when the Devils host the Coventry Blaze at Ice Arena Wales on Sunday.

He joins Fournier, Ben Blood, Mark Louis, Mark Richardson and Bryce Reddick on the Devils blue line and completes a roster which looks, if anything, even stronger than last season when they won the League title and play-offs championship.

Tickets for Saturday’s home match against Coventry are available ONLINE HERE, call 0800 0842 666 or book in person at the Arena reception.