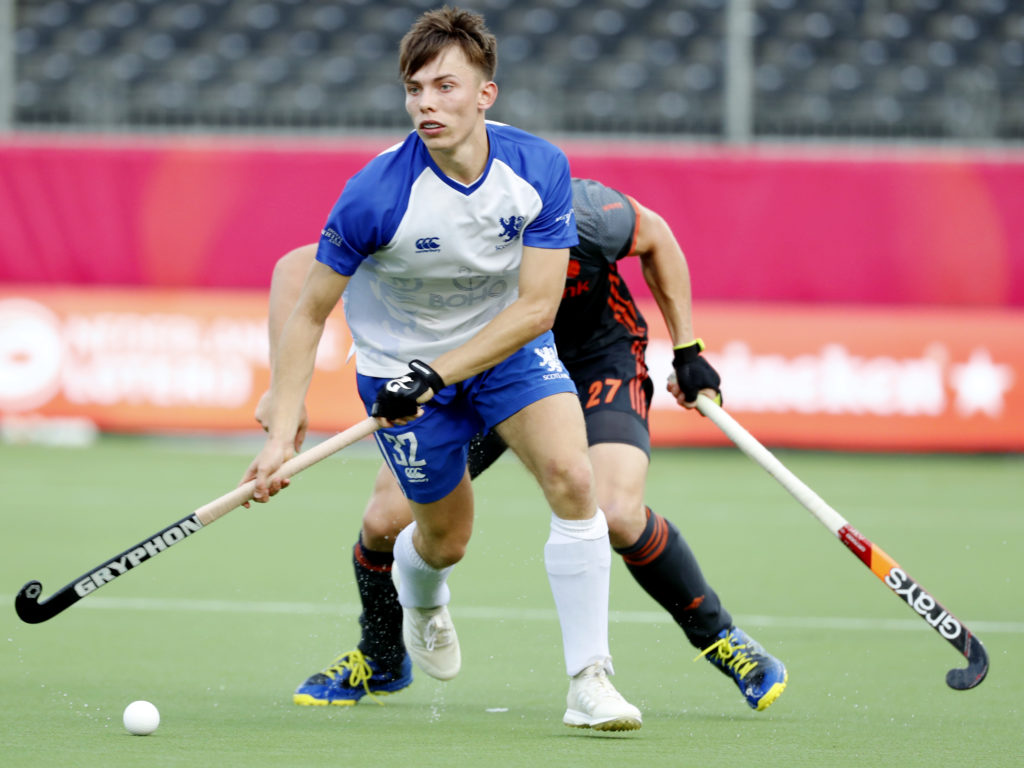 Callum Mackenzie in action for Scotland against the Netherlands. Pic: WORLDSPORTPICS

The student – who represents Cardiff and Met Hockey Club as well as Scotland and GB U21s – admits having no hockey to play for the time being has come as a bit of a shock.

But with the Olympics being shelved until next summer due to the coronavirus pandemic, Mackenzie feels he has another year see if he can break into the Great Britain squad and achieve the dream of representing his nation at the Games.

The former Oxford player said: “I like to think I’ve got another chance. I feel it’s more of a free year so I can give it a go, but if it doesn’t then I wasn’t expecting to go anyway.

“It gives me another year to throw my hat into the ring and see what happens but I’m not holding myself to anything. I’m not saying, ‘I’m gonna make it!’ I’m more like, ‘I’ll see what happens and take it as it comes,’ really.”

It’s a disruptive time for all sport with all major competitions coming to a halt and many future tournaments being postponed due to the virus.

Mackenzie is level-headed and realistic about his chances of making the re-arranged Olympics – now scheduled for July 2021 – but feels he has better chances for future major tournaments.

He added: “I feel Paris in 2024 and the Birmingham Commonwealth games in 2022 are my two big games.”

Just like most of the country Mackenzie has felt the disruption of the lockdown.

When you win the Sultan of Johor Cup!! Well done to Andrew McConnell; Jamie Golden; Callum MacKenzie and all the @GBHockey U21 squad. pic.twitter.com/jA39bgn6oc

“It all finished rather abruptly with uni and the hockey season coming to a halt. I almost didn’t know what to do with myself.

“But now I’ve started exercising again, it’s a lot easier to get back into a routine.

“It’s quite nice to have a break, but at times I just really want to be out on a pitch. I’m out running or cycling everyday so I have been keeping myself fit.

“GB has given us an eight-week programme that allows us to rest and it will build us gradually in our training mode, so we’ll be back in the mode we should be in when we’re back training again.”

Mackenzie comes from a family where hockey plays a major role but says they haven’t been doing any training at home.

“We haven’t actually got the sticks out yet, I think that might start next week. But it’s been quite nice to have a break from it.”

“I was chatting to my parents earlier and I said it’s weird not having anything on – having a free weekend for us is such a rarity.”

Mackenzie admits he is not missing hockey too much at the moment so he has yet to regularly start watching old matches.

“I watched one game the other day but that was only because it came up on my news feed on Instagram.  But I’m sure in a few weeks I’ll be going back and watching a few games here and there.”

For his club side, Cardiff and Met Hockey Club, they had just one more league game when the halt came.

.@ScottishHockeytake on the Netherlands today, and current student @CalMack12 joins the team again. We’re cheering you on from Cyncoed Callum

“We were too far behind first and second place to catch up and only one team goes up from the league, so we sort of lost it towards the end of this season, unfortunately.

“I don’t really know what’s going to happen with it – if we’ll play it or they’ll just call the league off.”

With all upcoming events being suspended, Mackenzie he admits the uncertain times feel strange.

“There were a few Test series with Scotland and a few GB U21 tournaments, but that has just been scrapped.

“We had the Europeans with Cardiff in Vienna and the Euro Hockey Board has scrapped that as well. So it’s going to be a quiet year for hockey now.

“It’s weird not having anything to work towards anymore but I’ve got to keep ticking over until things come back on, because we don’t know when we’ll be able to get back on a pitch and be able to train again.”