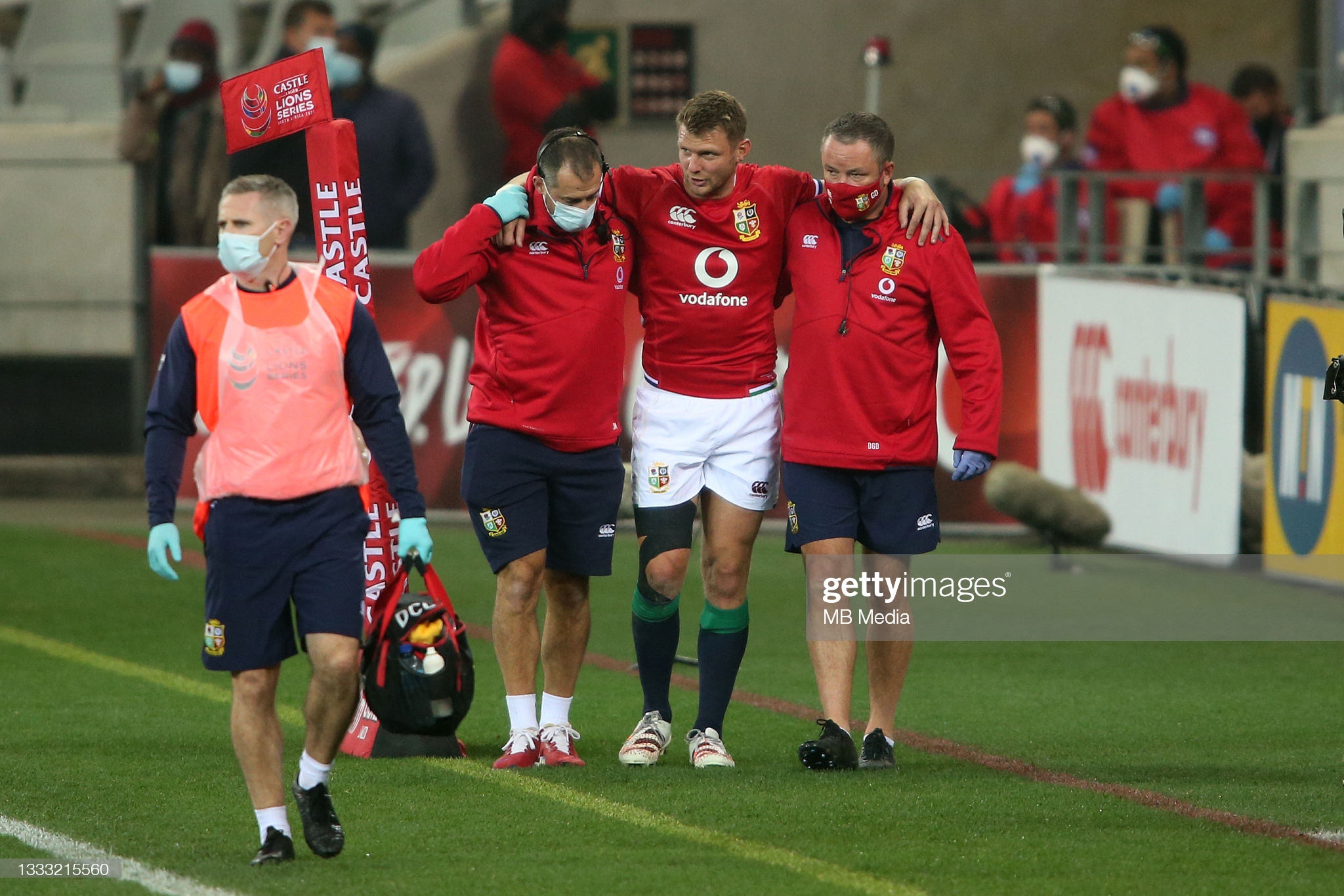 Dan Biggar of the Lions leaves the field with an injury. Pic: Getty Images.

Trystan Bevan has become the first “insider” to back the radical plan to limit substitutions in rugby.

Bevan – who is high performance co-ordinator at Cardiff Rugby – believes there must be a curb on the number of replacements allowed on the field to make the sport less dangerous.

Four-time Lions head coach Sir Ian McGeechan was part of a group of former coaches and players to sign an open letter this week calling on World Rugby to change its rules.

They said the game “has become unnecessarily dangerous” with the number of big, powerful players entering matches from off the bench.

They have also claimed that allowing teams to make eight substitutions in a game meant players can prioritise “power over aerobic capacity” because they were not expected to play for the full 80 minutes.

Now, Bevan has backed the call which the group claimed would be supported by current players if they were not afraid that speaking up would damage their chances of new contracts.

Bevan has worked at rugby’s elite level for 22 years and he has spent that entire time preparing players for the rigours of the professional game.

Since beginning at Cardiff Rugby over a decade ago, Bevan has seen the strength and size of professional players evolve significantly to the point where the game is now completely different to the one which went professional in 1995.

It means Bevan is uniquely qualified to analyse how to best protect the current and future generations of player.

And having recently taken up his new role at Cardiff Rugby, following five seasons at Wasps, he believes the solution to ensuring player welfare remains paramount is limiting the number of substitutions to three per game.

“I think it’s way overdue that they limit the number of subs,” said Bevan.

“Is it a contributing factor to the fact that there’s huge players that are coming on fresh when other players are tired? I think it’s a really dangerous precedent in the game unless they change it.

“It also incentivises players to be as big as they can and to hit as hard as they can with no fitness consequence.

“What I mean by that is if I’ve got a 140kg prop they can literally look me in the eye as an S&C coach and tell me, ‘well I only play half an hour every game, so I just want to demolish people when I come on.’

“The laws currently allow a player to have that attitude.

“I think keeping subs at eight would be a good idea because as far as player safety you don’t know who is going to get injured, but I think you should be only allowed to bring on three or four in a game.

“I’m doing a PHD with Imperial College in London at the moment. One of my opening studies is with a couple of professors at Imperial and we are about to publish a paper on momentum forces in rugby.

“One of the biggest findings of the paper I think will be that it’s not the weight that causes the collision it’s the speed.

“For example, if you go back to when Dai Young was playing. He was probably a 120kg prop for Wales and the Lions. He would play now, and he wouldn’t be bigger or smaller than any of the props.

“People haven’t got that much bigger in certain positions but some of the props now can run eight and a half metres a second.

“It’s the equivalent of having an articulated lorry that’s got a Porsche engine. By definition when the crash happens the impact forces are going to be a lot bigger, not because of size but because of speed.”

Strength and conditioning coaches rarely get the recognition they deserve, and Bevan is one of the best in the British game.

Returning Cardiff director of rugby Young thought the Neath man was such an integral part of his success when he was last in the Welsh capital, he brought him with him to Wasps.

While working as Performance Coordinator at Wasps, Bevan played a big role in getting the players into a physical condition where they could play Young’s all court attacking style of rugby.

Bevan has now returned to Cardiff so who better to compare the physical attributes of the Welsh players with that of the English?

“In the Wasps academy system, we probably had six or seven players like Jack Willis all with similar physicality and size.

“Therefore, the best rugby player is the cream of the crop that’s coming through whereas sometimes in Wales, historically, when we’ve had a big player, we’ve gone, ‘crickey, this guy’s got to come through because we haven’t got anybody else except for him.’

“It’s interesting because at national level you’ve got the national team who have undoubtedly been one of the fittest teams in the world over the last decade or so, but they play in a league where the average ball in play is 32-35 minutes maybe even less.

In a strongly-worded letter to World Rugby, McGeechan and other British & Irish Lions legends call for drastic change in the game by reducing the number of substitutes permitted by each side to four, from eight, to limit injuries.

“So, I would suggest that the Welsh players playing in the PRO14 have been at a disadvantage in the league system that we play.”

Bevan is now busy preparing Cardiff for the new season of the United Rugby Championship and he is adamant the strength and conditioning work will be crucial to perfectly execute Young’s gameplan.

“I’m trying to give Dai and the squad the resources from a conditioning point of view that they’ll need.

“At Cardiff we’ve decided to go down a road which is more aligned with Dai’s line of thinking but also aligned to where we think the game is going.

“But if you look across the board, we have got those big strong physical animals now. We aren’t behind size wise.

“What I’ve been doing since I’ve returned to Cardiff is trying to get those big guys to move better and more often.”

One thought on “Cardiff’s Trystan Bevan Backs Rugby Rule Change And Says: “Props Only Play For Half An Hour And Try To Demolish People””