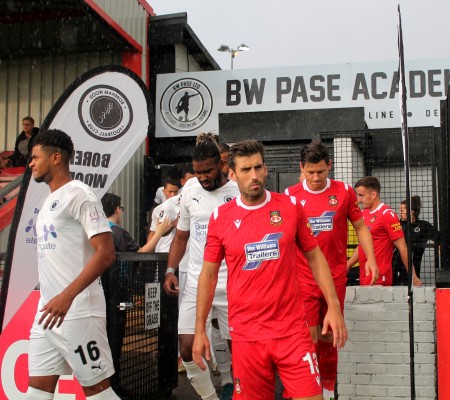 Boreham Wood and Wrexham players walk out before kick-off.

Defender Mark Carrington is a double Dragons centurion, making his 200th Wrexham appearance during their 2-2 draw against Boreham Wood.

Wrexham completed the first leg of their 1,000 miles round-trip trek to Hertfordshire and Kent with their focus now on Saturday’s Vanarama National League fixture at Dover, their longest away trip of the season.

Mark Harris, a loan signing from Cardiff City, and Bobby Grant, with his second goal in two matches fired Wrexham 2-0 ahead before Wood hit back to earn a draw.

“To reach 200 league games is a great little milestone,” said Carrington, now in his seventh season at The Racecourse. “We are disappointed with the result, but we go again on Saturday.”

“We have to take a lot of positives from it.

“We dominated the game and other than the two goals conceded it was almost a perfect away performance.

“We will learn from our mistakes, go to Dover and aim for three points.”

Manager Bryan Hughes wants his Dragons to be more ruthless, saying: “We had opportunities at 2-0 to make it three.

“I can’t be over critical of the players, we are creating opportunities and that means we are getting into the right areas.

“But we need to be more ruthless.

“It was a great bit of counter-attacking and pattern of play for the first goal by Mark Harris and a lovely finish for Bobby Grant when James Jennings won the ball back in midfield for the second.”

Wrexham defeated Barrow 2-1 on the opening day and looked on their way to another victory when they took control at Boreham Wood.

Devonte Redmond’s right-wing cross was met in the middle by Harris, who got ahead of his marker and the keeper to fire home from close range and grab his first goal for the Reds after 14 minutes.

Grant added Wrexham’s second on 69 minutes when he shot low into the net in front of around 400 away fans.

There should have been a third goal for Wrexham on 79 minutes, when Gregory parried a Harris shot and it dropped for Jennings, but the full-back’s shot was also saved.

With nine minutes left, a cross from Thomas was touched home by Kieran Murtagh, who was free in front on the net, to set up a nervous finale for the Welshmen.

Three minutes into added time a high ball was headed down and fell kindly for Justin Shaibu to steer it home and grab a dramatic late equaliser.