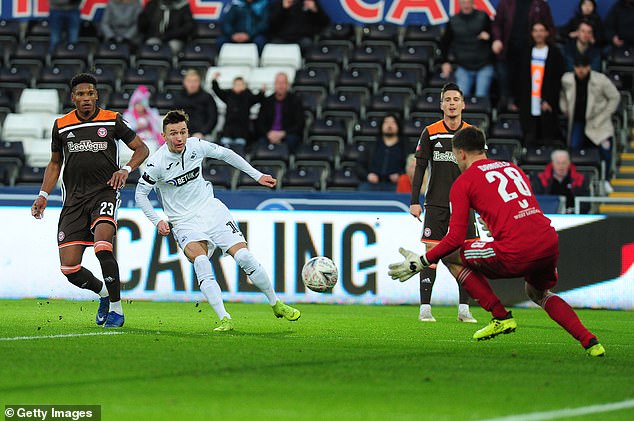 Bersant Celina has been handed the perfect chance to prove Pep Guardiola was wrong to offer him no role without even an audition.

The silky-skilled Kosovan was given just four games to justify himself at City – all of them in the months prior to the Spaniard’s arrival in 2016.

Midfielder Celina, 22, was sold by Manchester City for £3m last summer but will now be relishing to show what they are missing after the Swans were paired with his former club in the FA Cup quarter-final at the Liberty.

“The FA Cup is a bit of a showcase for not only me, but for everyone else,” said Celina, 22, who had spells on loan with FC Twente in Holland and then Ipswich.

“That is how they should think – ‘come and look at me and see what I can do!’.

“If you get drawn against a big team that’s your chance to prove to everyone who is watching that you can do it against them.

“None of the young players are dreaming about playing in the Championship for the rest of their lives. Everyone, especially me, wants to play in the Premier League.

“It is my dream to play in the Premier League and I think I can do that. There are things I need to get better at. You have to ask yourself why you aren’t playing at that level now. I would love to go up with this team.”

Celina rubbed shoulders with the likes of Kevin De Bruyne and Sergio Aguero during his time at the Etihad.

Now he will come face-to-face with them after City were handed another trip to South Wales following their victory over Newport County last weekend.

“When I look back on my time at Man City I remind myself I was training with top players and I know what to do to get to that level,” added Celina, who played a key role in the Swans 4-1 victory over Brentford in the fifth round.

“I managed to get through at one point when I was much young. I can do even better when I get more experience. That is the level I want to be at.

“It was incredible rubbing shoulders with players with that amount of talent. That gives me motivation. I didn’t feel uncomfortable being there – that was me and that was the place I should be.

“I am a very driven person. I will do, and am doing, everything to get to the Premier League. I will never give up as long as I stay fit and healthy. If you believe in yourself it will happen.

“All respect to the likes of De Bruyne and Aguero, they are the best players in the world, but if you give everything you shouldn’t believe you can’t get there.

Celina’s four game City career actually ended in the FA Cup, when he was part of an experimental side hammered 5-1 by Chelsea in February 2016.

He never played again under Manuel Pellegrini and was shipped to Twente soon after Guardiola breezed in.

“It is always fun playing in the cup because you never know what is going to happen,” he added. “That last game with Man City was a tough one.

“It was a big game against a strong Chelsea team. We had a lot of young players in the side because we had a lot of games and a number of injuries.”

“I can remember watching the finals. Apart from the Champions League, the FA Cup has always been the big one.”

Celina has been Swansea’s creative force this season and although he’s lost a little status, there’s no loss of belief.

And he is desperate to maintain that form as Graham Potter’s side try toput aside the off-field issues surrounding the club after the sale of so many players.

He added: “I spoke to the manager before I came and it was like a good, new start for me. It has been very positive for me and there was no question about whether or not I’d come.

“It is a beautiful club and we want to play good football.

“I always wanted to play just the way we are playing now. That was the most important thing for me. The manager trusts me and the players to play that way. I think I’ve been playing well and the manager has been great for me.

“I want to do well for me, for him and for everyone to repay their faith.”