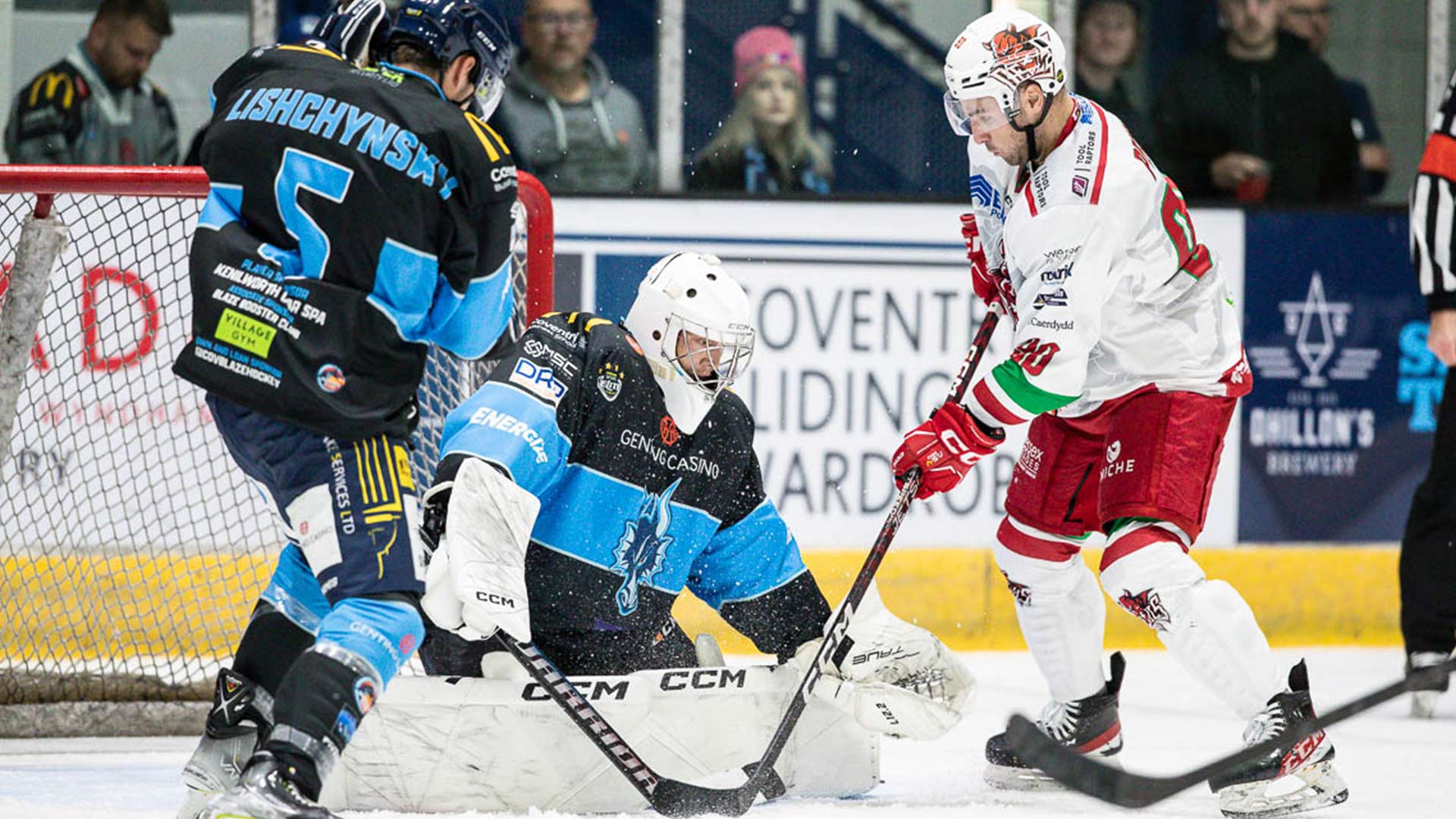 A 4-1 defeat at unbeaten Coventry Blaze left the Cardiff Devils empty-handed for the second time this weekend and winless in Group B of the Challenge Cup.

Coming off a disappointing defeat to the Guildford Flames on Saturday night, Marcus Crawford (Josh Brittain) looked to have given the Devils the ideal opportunity to launch a bounce-back performance.

But Devils hopes faded as Blaze gained the ascendancy with little response from Cardiff, who had Ben Bowns’ 26-saves to thank for allowing them to cling onto Coventry’s coattails.

Crawford’s goal gave the Devils early hope when his blueline shot deflected into the net past Finn Paavo Holsa.

But that was as good as it got from a Devils team, who rarely looked like getting back into the game after Radek Veseley’s power play goal, and Peyton Frantti’s short-side finish wiped out their lead going into the first intermission.

The Devils were out-shot 13-4 in a second period in which they were required to kill a string of penalties before falling further behind to Jack Billings’ goal.

Tanner Lishchynsky’s empty-net goal in the final minute of play wrapped up a fourth-straight win for Coventry, leaving Brodie Dupont with plenty to ponder.

The Devils coach must surely be scratching his head after seeing his team produce wildly contrasting performances over the first two weekends of the new season.

The resilience and clinical offensive swagger shown by the Devils in recent victories over Sheffield and Manchester bore little resemblance to the more recent disjointed displays that resulted in the same Cardiff team being comfortably beaten in successive games.

Against Coventry, the Devils’ top-two scoring lines struggled with shot production. The Martin-Reid-Crandall line and the Cougher-Cox-Sanford line each produced just five shots – a clear marker that some fine-tuning is required, and it was a defenceman, Mark Richardson, who led the team in shots with three attempts.

The Devils also, somewhat uncharacteristically, struggled against Blaze in the face-off circle. Devils are usually dominant on the draw, but on this occasion, Coughler was the most successful (of the players who took more than three face-offs) with a 50 percent win-rate (W10, L10).

And the Devils’ difficulties in offence this weekend were no more evident than with the man advantage.

After going 0-for-4 against Flames on Saturday, the Devils had just two power play opportunities against Blaze but were equally as ineffective.

The Devils power play currently looks disconnected, either tending to err on the side of caution, taking the safer option to keep the play alive by making the extra pass, or by waiting too long for the perfect passing lane to emerge.

Either way, the tendency to overplay and reluctance to work the goalie by getting a quick-shot at goal, is making penalty killing and Devils’ time in the offensive-zone considerably more manageable for the opposition.

Special teams were not a priority focus during the Devils’ training camp and the idea was they would be worked on more as the season unfolded. And it may well be that Dupont and his staff decide to turn their attention to special teams sooner than anticipated.

Of course, the probability of there being some bumps at this early stage of the season is always a strong likelihood for every team and no overreaction is needed.

Putting the work in 😈👊 pic.twitter.com/jkBLDJmoHq

Fortunately, the bloated format of Challenge Cup, which allows eight of its 10 teams to progress through the group stage, creates a forgiving environment for teams who run into such difficulties.

With no immediate threat of elimination, these group stage games are the ideal time for any shortcomings to be exposed, as opposed to the highly competitive Elite League where points dropped now will be decisive at the end of the season.

Under Dupont, the Devils have already this season shown how devastatingly effective they can be and this weekend’s home double-header against Glasgow and Guildford provides the ideal opportunity to right a few wrongs and kick on with their encouraging start in the Elite League.

OTHER NOTES
Mark Louis was a scratch against Coventry after failing to complete the game against Guildford the previous night.

Marcus Crawford now has a 3-game point-streak in both league and cup (2G, 1A).