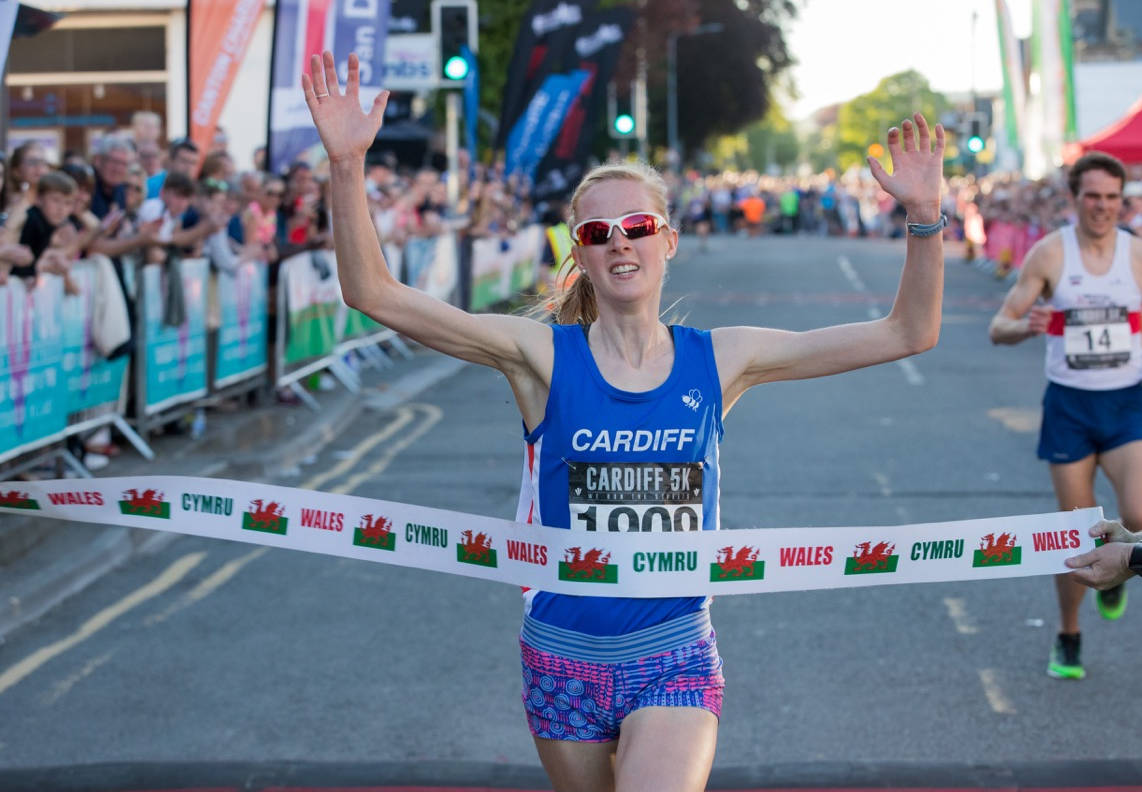 If you’re going to make your marathon debut, where better to make it than the Great Britain Olympic team trials?

That’s exactly what Cardiff’s Charlotte Arter will be doing when she makes her first outing over the classic 26.2 mile distance in London on Friday.

The former parkrun world record holder, 2018 British 10,000m champion and Welsh half marathon record holder will be taking a big step up in distance, but is relishing the chance to take on the country’s top marathoners for a place in Tokyo.

Arter told Dai Sport why she is taking the opportunity now to add another string to her already accomplished and versatile bow.

“It’s just the perfect opportunity to have a go at my first marathon,” said Arter.

“In early January, there didn’t seem to be much on the race calendar for the next couple of months. And we’d discussed it briefly at the back end of last year.

“So we thought if there wasn’t much else going on and we’re going step up to the marathon at some point anyway, we just saw it as quite a good opportunity to give it a go and see what I could do off a modest build up this time, just to see what I can do for my first marathon.”

“So I’ve kept Tuesday’s sessions as a sort of 10k session. And then I’ve just done a slightly longer marathon specific session on Friday. And then some longer runs on Sunday.

“So I haven’t done any sort of crazy marathon mileage, it’s all been kind of pretty marathon specific.

“But my main aim was just to stay healthy for eight weeks and get on the start line. I battled quite a few injuries last year, and it was more that I’d prefer to be 10 per cent, undercooked on the start line, rather than push it too far and not get there.

“So I think, in terms of marathon training, it’s definitely got progress; to step up in future marathons. You know, a bigger build-up and more miles.

“I think we just wanted to see what I could do off the build that we’ve done. And I’m really happy how the marathon sessions have gone and the long runs. It’s just whether I can get through 26 miles! I’m excited to be on the start line and give it my best shot.”

Arter will be up against the cream of British women’s marathon running, including the likes of Clapham Chasers athlete Steph Davis, who is the fastest in the field on paper with a PB of 2:27.40 – well inside the Olympic qualifying time of 2:29.30. The first two finishers are guaranteed selection as long as they have the qualifying time.

The Cardiff Athletics runner is going into the race with an open mind as to what she can achieve. “There are going to be two pace groups at the trial race, and I’ll be going off with the Olympic marathon pace. So my aim is just to try and stay with the group for as long as possible.

“You never know what’s going to happen on race day. But I’m going to try and keep up with the pace for as long as I can. And hopefully, if I can finish, I will end up a PB whatever I run!

“But if I can nail the Commonwealth Games standard, and then even better if I could get that Olympic standard. Well, you know, that’s all I could ask for.

“But I’m just going in with an open mind. I just want to enjoy it, finish it, and yeah, just see what I can run. I’ve got nothing to compare to. I’m kind of going into the unknown. So I guess the pressures off, really?”

Arter may be going into the unknown, but she will be surrounded by familiar faces from the Welsh endurance running scene, which is going from strength to strength.

The fastest Welsh athlete on paper going into the race is Micky Morris Racing Team’s Natasha Cockram, who won the British title in London last October and has a PB of 2:30.49.

“It’s great to see so many Welsh athletes racing the trials between the marathon and the race walk,” says Arter.

” And, yeah, I’ve done a lot of miles with Clara and it’ll be really nice to be running with her in the race. It’s definitely nice to have someone you’ve been training with racing with you.

“So yeah, it’s great to see so many Welsh athletes, racing and I think, I think it’s going to be a really good race.

“British distance running as a whole is progressing each year and the field is really, really strong. To be racing against the top British girls and then to have a good crop of Welsh athletes in that race is really exciting.

“I think British marathon running is just going to go from strength to strength over the next few years and I think it’s going be exciting.”

Arter may be stepping up to the marathon on Friday, but that’s not to say she is putting all her eggs in one basket for the rest of this summer with further Olympic trials in the offing at various distances.

“I’ll definitely keep my options open,” says Arter. “One of the reasons for doing this marathon was it’s obviously at the end of March, so I can have April to recover, and then we’re back into the track season for May, June, July onwards.

“So this is really so that I can recover from the marathon and then concentrate on 5,000s and 10,000s on the track over the summer. So it has given me basically two options, really.

“So yeah, I definitely will hopefully get another marathon start, either towards the end of the year or next year, but definitely look to get some good 5,000, 10,000 metre races on the track this summer.

“And, yeah, just really keep my options open and just take every race opportunity there is this year, I think.”

Arter’s added versatility will mean she has options aplenty next year when there are three major events – the European Championships, Birmingham Commonwealth Games and World Athletics Championships in the space of six weeks.

“Next year is pretty crazy,” she says. “Three large championships in such close proximity, but I mean, yeah, the main aim is to try and get a qualifying standard for the Commonwealth Games, and then, you know, just take it from there and see what opportunities arise, keeping my options open, trying to run as quick as I can across a variety of distances, stay healthy and see what happens.

“Even if you run the qualifying standard, it’s not guaranteed you’re going to be a part of Team Wales because it’s so strong, but I’ve hopefully got the 10,000 as well.

“So you’ve just got to run as quick as you can and just try and give yourself the best opportunity to hopefully get selected.

“It would be awesome to be part of the Commonwealth Games team at a home championships where, hopefully by then, we can have all our families and friends supporting us in Birmingham.

“But yeah, I’d say it’s not a given and you just got to run as quick as you can and hopefully get selected.”