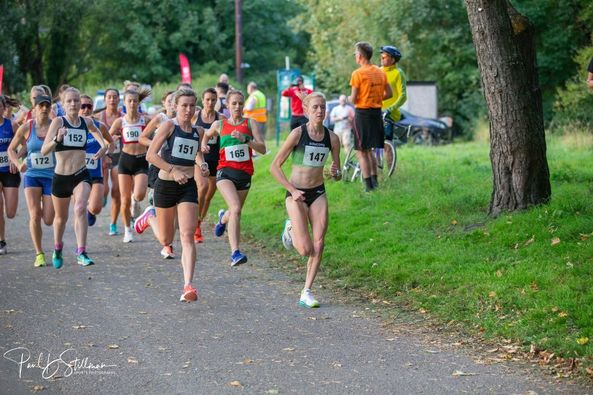 Charlotte Arter on her way to victory as road racing returned to Wales at Cardiff Sunset 5km. Pic; Paul Stillman

Charlotte Arter made a blistering return to the roads after a six month enforced absence caused by COVID-19 to win the Cardiff Sunset 5k.

And Osian Perrin took the honours in the men’s race as a small group of invited athletes helped re-start road racing in Wales.

“It had been six months since my last race so it felt good to be back racing,” said Arter, after dipping under the 16 minute mark to win in 15:50.

“I’m very grateful to Welsh Athletics for organising such a fun and safe return to road racing in Wales, hopefully the first of more in the next couple of months’.

Arter edged away from training partner Clara Evans – who set a new PB of 72:21 for the half marathon in Antrim the previous week – to triumph in her first race since her Podium 5k victory in March.

Alaw Beynon-Thomas of Les Croupiers RC was fourth in 17:06 with Kate Roberts of Swansea Harriers fifth in 17:19.

Rising Welsh racer Perrin made the long trip from Anglesey for the race but made it count with a fine win in a closely-contested race.

The Menai Track & Field Club runner and Cardiff’s Matty Edwards were locked together on the finish straight, but 17-year-old Perrin just had the edge as both finished in 14:35.

Swansea Harrier Guy Smith was third in with 14:46 with Newport Harrier Abed Teweldebrhan fourth in 14:47 and Daniel Hamilton of San Domenico RC fifth in 14:49.

“It was really nice to race again and especially on home turf in Wales’ commented Perrin.

“The race was really tactical, really slow for the first 4k, around 15 minute pace and for the last kilometre I wasn’t sure how everyone’s kick would be so I just decided to go for it and see who would stick with me.

“I was ecstatic to take my first race win of the season.”