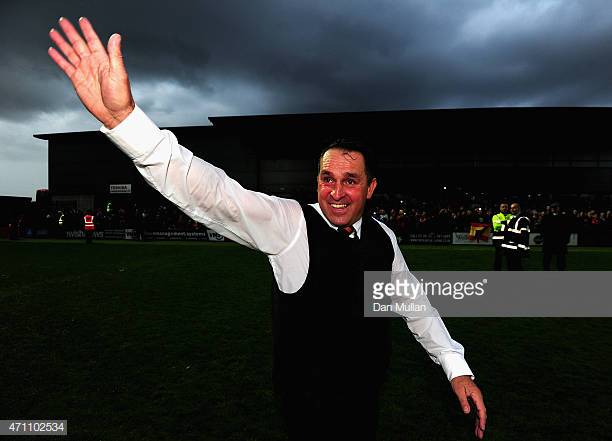 More than 600 Wrexham fans will follow their team to Derbyshire for Saturday’s crucial League Two clash with Chesterfield.

The Dragons earned their place in the Emirates FA Cup first round thanks to a midweek replay win against Harrogate and are now focused on playing the Spireites.

Martin Allen, the highly experienced Chesterfield manager, has no doubts about the quality of Wrexham’s challenge for promotion back to the Football League.

The Dragons are second on goal difference behind leaders Salford City and Allen said after watching the 2-0 cup win against Harrogate: “They are the best team I’ve seen all season.

“They have goal threats all over the pitch, are an extremely good team and the best Wrexham team I’ve seen for a while.”

While Wrexham manager Sam Ricketts is in his first management season, the Allen has been a manager for 15 years and been in charge of 577 matches at nine different clubs.

He has worked hard to lift his team away from relegation danger near the foot of National League football and they are unbeaten in four fixtures, although three of those were drawn.

“We have worked long hours on the training pitch correcting things and changing our style,” said Allen. “Now teams don’t like playing against us anymore.

“We’ve brought a couple of extra players in on loan and they’ve really improved our team. We’re much younger, sharper and fresher.

“Our supporters against Fylde were highly supportive of the team, their effort and commitment. Fans recognise there’s been a turn around and we all recognise there was a need for a change.

“I was upset a few weeks ago when the players were booed off the pitch and supporters were singing ‘you’re not fit to wear the shirt.’

“Of course I had sleepness nights, but I went back into work and thought there were two ways out of it – to sulk, moan and cry or buck our ideas up to improve.

“We had a big players’ meeting and a staff meeting. I wasn’t present at either and everyone put stuff on the table.

“It gave me a chance to read and listen to their contributions, then the next day I went back in and presented to the players what they thought, what the staff thought.

“My feeling of happiness (after the win v Fylde) wasn’t relief. It was happiness for players and supporters.

“The first thing we said in the dressing room after the game was ‘now let’s get ready for Wrexham.’

“We hugged each other and now we go again against Wrexham.”

Former Crewe and MK Dons defender Mark Carrington was Wrexham captain for the cup win against Harrogate, taking over the armband from injured Shaun Pearson, and he says: “Our team is on a good run and we have to keep that going. Chesterfield are a a good team and a threat, particularly at their stadium, and we have to be at our best.”

Wrexham are second in the Vanarama National League, behind leaders Salford City on goal difference, and unbeaten in their last six fixtures.

Ricketts and his team have been drawn against Weston-super-Mare away in the FA Cup and Carrington says: “We deserved our win against Harrogate (2-0) and kept a third clean sheet against them this season.

“The boys stuck to our game plan, rode our luck a little in the first half and then ground it out. We were able to get on top and delighted to keep the door shut and stop them scoring again.

“Harrogate are a frescoing team and the win shows how solid we are as a unit.

“An FA Cup run can boost a club’s season and give you a lift. We’d love to pit our wits against one of the big boys, but Weston away is a tough tie. They want a big scalp themselves, we play in the division above them and will have to make sure we are on it.

“We are a good team and if we can make progress there won’t be many teams, even in the Football League lower divisions, who will fancy playing us.”