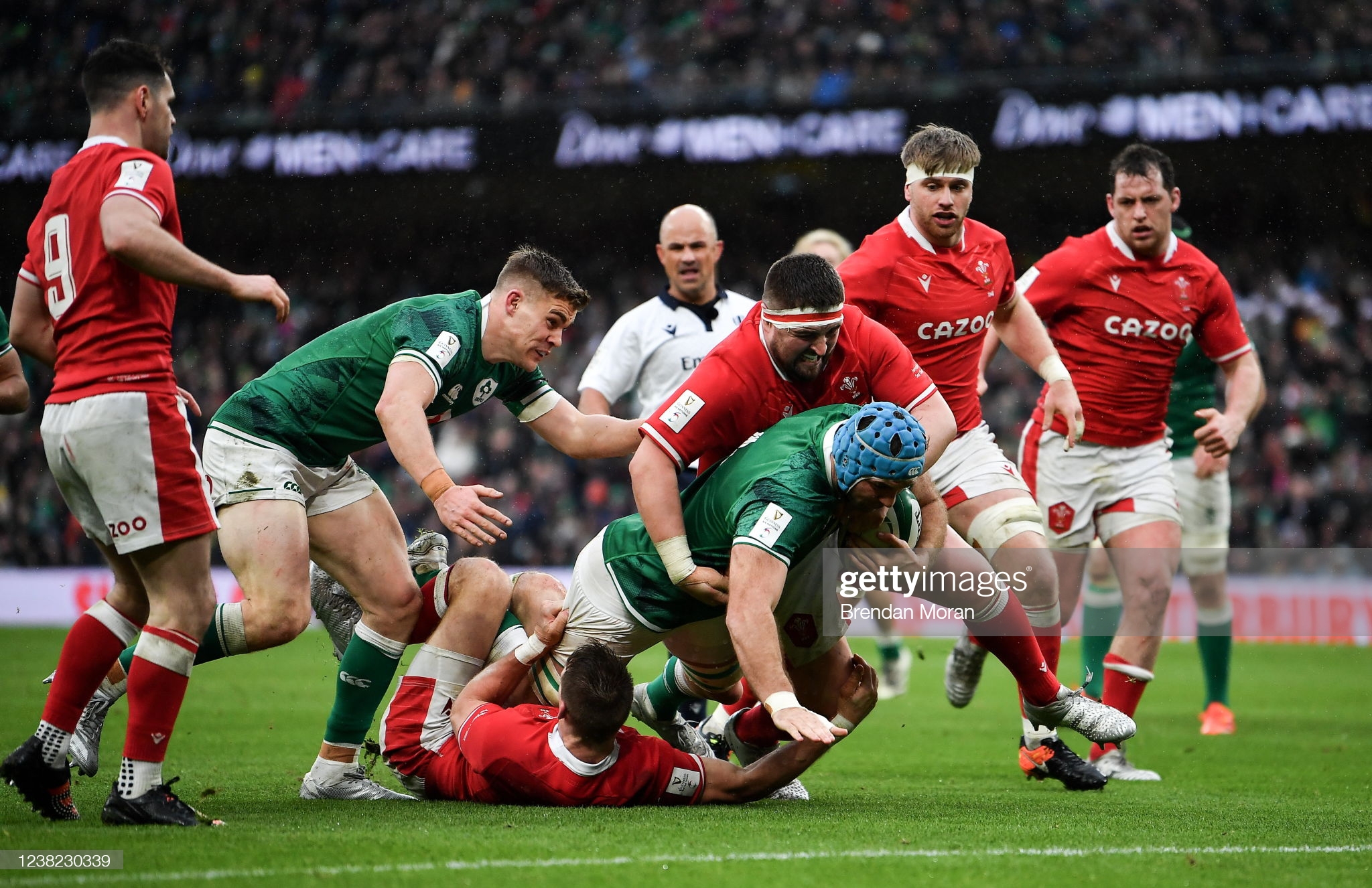 Wales have taken plenty of flak since their opening Six Nations defeat against Ireland. Tomas Marks pinpoints those on-field failings, but suggests it could be Wales finding the fault lines when it comes to the game with Scotland in round two.

Wales versus Ireland in the opening round went just as expected, but although Scotland are most people’s favourites this weekend, it may not prove as predictable.

In Dublin, the outcome was as most Welsh supports had feared with the Irish dominance in set piece, ball carrying, ruck speed and attack variation.

It was quite evident that Ireland attack coach Mike Catt drilled the “loop around” play as they could expose Josh Adams at 13 and manipulate the defensive width.

It was a dream debut for Mack Hansen with a try assist for Bundee Aki, nine carries, aerial battle victories, a good cover tackle on Jonny McNicholl and good contribution in the build-up to the Gary Ringrose try.

The Irish won the gain line battle and did their homework in the contact area as they prevented the Welsh poachers – Taine Basham and Ellis Jenkins – from slowing down their attacking ball.

Amazingly, the Irish ruck speed was less than three seconds for 40% of the match, which is lightning fast ball to attack with.

🗣 “Keenan makes himself the extra man – he does that so often, it’s unbelievable” | 🏉

The Irish were able to exert pressure on Wales in most facets of the match and this was highlighted in their defensive line-outs.

Wales were forced into going front ball which resulted in a long pass from Tomos Williams to the first receiver.

This poor quality ball from set piece resulted in Wales not getting any momentum into their early attacking play and phases.

This first Six Nations performance was reminiscent of a first autumn international as Wales appeared undercooked and clunky.

Apart from a resilient second quarter, they lacked accuracy in the set piece, in exits, handling, contact area and conceded a whopping 12 penalties.

Against Scotland they will need to sort out a few areas in training this week to get back to winning ways.

Wayne Pivac – like all head coaches – will be judged on his results and his selection. He’s been dealt a big blow with the loss of key leaders and world class players, but the squad desperately needs to evolve and stop depending on the veterans to get them over the line.

Pivac and his coaching team will be finalising their selections today and they will need to bring in more ball carriers to get the team moving forward.

Willis Halaholo will likely replace Nick Tompkins at 12 as he only made two metres in the whole match in Dublin and Ross Moriarty could replace Ellis Jenkins or Aaron Wainwright in the back row as they were invisible in the last match.

Although he ended up on the losing side, Taine Basham was still one of the stand-out players for me in the Ireland-Wales game.

Consistently does the right thing. No coincidence that he was in the right place at the right time for this try either.#IREvWAL #SixNations pic.twitter.com/5RcZYdXPsf

Another option he could explore is playing the uncapped James Ratti at 8 – or bring in Jac Morgan – which will provide them with another explosive player in the back row.

In defence the obvious choice would be to bring Jonathan Davies back to the centre to neutralise the Scottish threats.

The other common sense approach would be to keep the Lions back three in their preferred positions.

Scotland will be licking their lips for this match as it gives them an opportunity to underlione their real title credentials after beating England.

The Scots will have analysed the last Welsh match and probably highlighted a few areas to exploit in their attack review.

With Racing 92 in the Top 14, Finn Russell likes to expose guard defenders with inside passes to flying wingers.

Many of the Welsh guard defenders, like Wyn Jones and Tomas Francis, move sideways and not forward in this position and this will be highlighted in the Scottish attack meeting as a potential opportunity.

Racing exploited this tactic against Northampton in the recent Heineken Champions Cup match.

I’m sure the Welsh defence coach, Gethin Jenkins, and WRU analyst Marc Kinnaird will have noticed this attacking tendency from Russell and try to stop any of these threatening passes.

In defence, Wales will need to keep an eagle eye on speedster Darcy Graham as he made 50 metres in the last match from six carries.

Also, they will need stop the colossal Duhan Van Der Merwe from first phase attack as he gets the Scots going forward and gives them momentum.

George Turner, the Scottish hooker, missed three tackles in the last match and I’m sure that Stephen Jones, the Wales attack coach, will have identified this weakness.

Wales should look to expose this by isolating him from attacking line-outs.

Turner is used as the “tail gunner” from Scottish line-outs and his role is to tackle the first receiver.

This is a notoriously difficult tackle as there are usually multiple threats, making it difficult to identify the main carrier.

Another player Wales could target is the Scottish scrum-half Alli Price.

Your Scotland team for Saturday’s @SixNationsRugby clash with Wales has been confirmed.

He defends in the front line so there are opportunities to exploit him in defence by kicking into the chip zone.

Tomos Williams and Dan Biggar didn’t exploit the Irish chip zone last week, but that could be an opportunity against Scotland.

At Murrayfield, England refused several kickable penalties, missed a “kick-pass” chance with Marcus Smith and Henry Slade, and were held up over the line from a line-out maul.

If Wales are going to beat the Scots they will need to be ruthless. England wasted several opportunities in attack by kicking rather than passing the ball into space which showed a lack of communication and poor decision making.

Both teams conceded a high number of penalties in round one, but if Scotland want to beat Wales in Cardiff for the first time in 20 years they will need to be very disciplined.

Scotland will probably need to replicate their away performances in Paris and Twickenham last year in order to win.

Just trying to imagine what Welsh rugby twitter would be like if Wales lost to Scotland in Cardiff for the first time in 20 years #6Nations pic.twitter.com/5VKXb2Ez2e

Despite a poor first showing against Ireland, I still predict a tight home win as you can’t keep the quality of Louis Rees-Zammit, Liam Williams, Josh Adams, Taine Basham and Daniel Biggar down for long.

I’m also anticipating that Louis Rees-Zammit will be electric in this match and he will score a scorcher against the Scots, like Ieuan Evans in 1988 and Shane Williams in 2010.

Its only two more sleeps until another bumper Six Nations Rugby weekend!