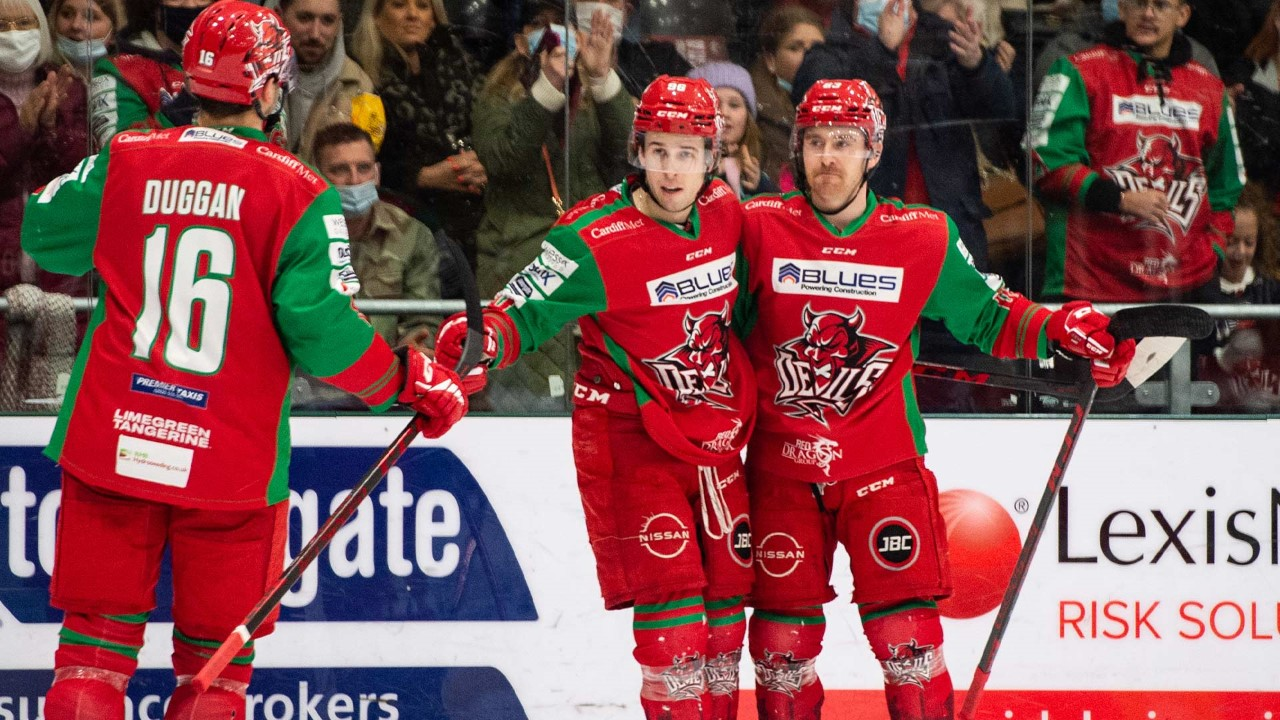 A hat-trick from Cole Sanford helped Cardiff Devils return back to winning ways on Saturday night as they head into two, potentially, season-defining games against Sheffield Steelers.

Cardiff travel to Yorkshire today knowing their hopes of reclaiming the Elite League title rest in the hands of league leaders Sheffield, who have five games in-hand over Devils in addition to a two-point lead.

The two rivals will then clash yet again three days later in Wednesday’s Challenge Cup semi-final tie, which is to be played over a single game.

Sanford took his tally 15 goals for the season, Justin Crandall and Jake Coughler each had a goal and an assist in a penalty-filled game at a sold-out Ice Arena Wales.

Sanford scored two power play goals to give the Devils a first-period lead from which they never looked back, much to the delight of head coach Jarrod Skalde.

“The two points were imperative after losing two in a row and trying to stay on pace,” he said. “I liked the way we started, we got the first goal which has been a bit of a struggle lately and our power play was clicking. There was a lot to like.

“I felt over the last couple of games we weren’t getting into the guts of the game enough – driving the net and getting pucks to the net, and once you start doing that, things start to open up for you. We did that tonight.”

Sanford finished off a slick pass from Trevor Cox at 12:16 to make it 1-0 with Brendan Mikkelson getting the other assist on the opening goal. Just over a minute later, the Flames were down a man again when Chris Gerrie was sent to the box for slashing.

Mikkelson fed Sam Duggan who tapped the puck to Sanford for his second goal of the period and the Devils second power play goal of the night at 13:58.

Matt Register and Jamal Watson dropped the gloves with just under four minutes left in the period, both were handed five-minute major penalties for fighting and the period ended with the Devils leading 2-0.

The second period saw the Flames claw one back at 25:23 when John Dunbar finished off a pass from Jordan Cownie to make it 2-1. Justin Crandall tucked the puck from behind the goal past Lindskoug to extend the lead to 3-1 at 31:25. Then Matt Register made it 4-1 for the Devils with another powerplay goal at 33:55.

Just over two minutes into the final period, Sanford had his hat-trick goal set up by line-mates Cox and Coughler. Tempers boiled over as Sanford was jumped after scoring his goal, leading to all five players on both teams coming together. The result was Cox, Sanford and Coughler all in the penalty box together with a couple of Flames mirroring their penalties.

At 54:38, Riley Brandt nearly scored his first goal as a Devil, but Coughler managed to corral the rebound and score past Kevin Lindeskoug, giving the Devils a 6-1 lead. With less than three minutes to play, Chris Gerrie scored on the powerplay for Guildford to round out the scoring at 6-2.

Devils goaltender Taran Kozun finished with 31 saves for the win.