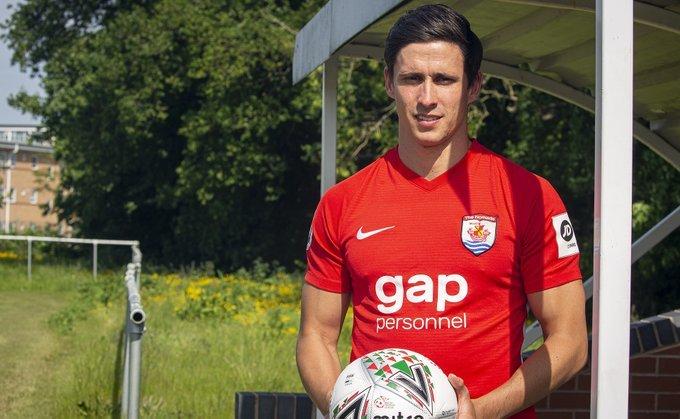 Aeron Edwards has moved from The New Saints to Connah's Quay Nomads.

Last week, Connah’s Quay Nomads were crowned new Welsh champions thanks to their performances on the field. Now, argues Matthew Burgess, they are quickly starting to behave like champions, off the field, too.

If ever Andy Morrison’s Connah’s Quay side wanted to make a statement of intent following their first ever league title, the signing of Aeron Edwards direct from rivals The New Saints certainly did the trick.

Just a week after being awarded the Cymru Premier title, the Nomads declared the off-season open – bolstering their already strong squad whilst simultaneously depleting their closest rivals in the process.

You sense Edwards’ switch to Deeside could prove to become a significant transfer – not only for his new club, but also the team he departs after 11 seasons’ service.

Edwards’ time at The New Saints was a huge success, featuring as a key member of a side that amassed nine league championships, five Welsh Cups and five league cups, since joining the club from then Welsh Premier outfit Caersws in 2008.

Filling the void left by Edwards will be some job for The New Saints in the coming weeks with the club already pressed into a crossroads this summer.

With Connah’s Quay having secured the Champions League qualification prize money, The New Saints also have a number of senior players out of contract this off-season and the club will need to determine whether last season was enough evidence to break up the squad and rebuild.

Or they may decide to keep faith with the majority of last season’s personnel and try to fill in the gaps.

The answer probably lies somewhere in between. Despite some uncharacteristic poor results, the extent of The New Saints’ demise last season was over-exaggerated in parts last season.

The reality was that at the time the season was suspended, they were still very much in the title race but due to circumstances beyond sport, we will never know the true outcome of the season.

Whichever route The New Saints decide to take this summer, the quality, experience and leadership possessed by Edwards would have made him exactly the sort of player you would want to build your team around.

As I understand it, losing Edwards was almost certainly not part of Saints’ planning with a new contract offered but rejected.

It also remains to be seen as to whether Edwards is the only big name heading out of the door at Park Hall.

Regardless of their approach, this is a big summer for Scott Ruscoe and the club and they need to get their recruitment right and hit the ground running next season if they are to wrestle back control from Connah’s Quay.

It is after all, a club where success is mandatory and arguably, while the Nomads have closed the gap, The New Saints have stood still.

It promises to be fascinating at the top of the table next season which is something we have not been able to say with conviction too often in the Cymru Premier, which is not only a credit to the standards previously set by The New Saints but also the strides forward Connah’s Quay have made in recent seasons.

The Nomads are deservedly riding the high of their title success and their taunting ‘Welcome to Wales’ message celebrating the arrival of Edwards on social media bore similarities to the famous ‘Welcome to Manchester’ billboard that was unveiled upon Carlos Tevez’s switch across town to Andy Morrison’s beloved Manchester City.

I am told that the Nomads are not finished with their recruitment yet and looking to close deals to add up to three more significant signings to the current squad as they prepare to compete in Europe (should it go ahead) and defend their title.

Time will tell whether this period spearheaded by Edwards switch to Connah’s Quay signals a similar changing of the guard in our top-flight.

It’s been two years since Cefn Druids last competed in Europe but after missing out on the top-six in successive seasons the club are believed to be taking a major shift in strategy this summer.

Having announced a new academy model and plans to include scholarship players into their first-team set-up next season, the team’s recently appointed director of overseas recruitment and scouting, Marco Correia de Oliveira, is emerging as an influential figure in future planning at the club.

It is understood that a number of Oliveria’s clients will join Cefn Druids this summer.

In addition to a growing Portuguese influence amongst the playing staff, Cefn Druids are also expected to appoint the Cymru Premier’s first ever Portuguese manager for the new season after confirming earlier this month that Stuart Gelling’s contract would not be renewed following his brief spell at The Rock.

Bala Town appear to be one of the most active clubs in the Cymru Premier since the season officially ended.

I understand that the club are close to finalising three new signings as they look to strengthen for their forthcoming Europa League qualifying campaign following last season’s impressive third-place finish.

Amongst those to arrive will be a new goalkeeper after English stopper Josh Tibbet confirmed on Twitter that he would be leaving the club after making 17 appearances last season.

All three expected arrivals at Maes Tegid are believed to be current Cymru Premier players.

In other transfer news, Connah’s Quay forward Michael Bakare is attracting the interest of at least two Cymru Premier League clubs, while The New Saints have their sights set on a current Cymru Premier player as they look to make their first signing of the summer.