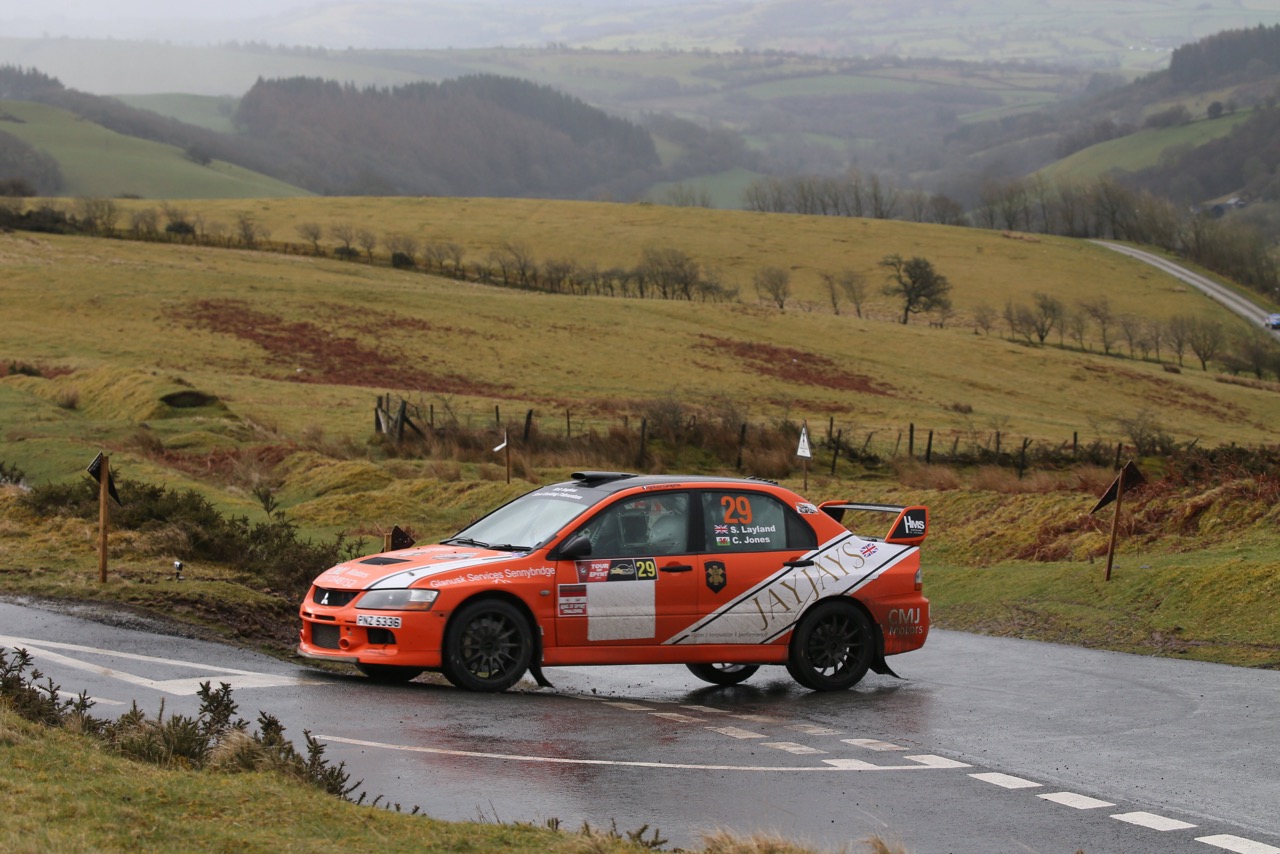 Craig Jones has taken the early lead in the 2019 JD Tyres Welsh Tarmacadam Rally Championship after scoring maximum points on the opening round of the series, the Rallynuts National Tour of Epynt.

The Llangorse-based garage proprietor had a great drive to sixth overall in his JayJays-backed Mitsubishi Evo 9, which is now fitted with a sequential shift gearbox. He and co-driver Shaun Layland never put a foot wrong over the seven special stage event, despite some atrocious weather conditions.

Triple Welsh Tarmacadam Rally Champion Richard Merriman got the defence of his Welsh Tarmacadam off to a good start with second placed points. Heavy sleet and rain showers made it far from ideal conditions for the Pontypridd driver’s two-litre rear-wheel drive The Roof Hub/Touchline-backed Darrian T90, but a great performance by him and co-driver Kath Curzon was rewarded with a 12th overall finish.

Llyr Jones/Sion Jones finished third out of the Welsh Tarmacadam runners in their Escort, just under two minutes ahead of Malcolm ‘Tar’ Jones/Rhys Jones in their Peugeot 207 S1600.

Llandysul’s Will Mains was on his giant-killing best on Epynt – the 1400cc Welsh champion winning his class by seven and a half minutes in his Vauxhall Nova, with Ammanford’s Claire Williams on the pace notes.

Mike Pugsley/Marc Clatworthy scored some valuable Welsh Tarmacadam points in their class-winning 1974 Escort Mk1 RS2000. Steve Hazelby/Jeff James were next in their Subaru Impreza, while Jason Watkins/Elspeth Watkins were the eighth and final registered Welsh Tarmacadam finishers home in their Peugeot 106 Rallye.

Phil Turner/Simon Anthony were fourth overall early on in their TCS-backed Mitsubishi Evo 9 until they lost turbo boost halfway through SS5 and were forced to retire when they discovered the turbo had broken away from the exhaust.

David Morgan/Richard Suter had to reverse their 2.5-litre Millington-engined Darrian T90 GTR at a chicane on SS1 and then spun at Llandeilo’r Fân Triangle on SS5. They ended the event stuck off the road, after locking the brakes on a muddy fast approach to a right hand corner over a crest.

The event was also the opening round of the Promotive Engineering Group King Of Epynt Challenge, with the Tour of Epynt overall winners Jason Pritchard/Phil Clarke taking maximum points in their North Road Garage Ford Focus WRC.

The next round of the JD Tyres Welsh Tarmacadam Rally Championship is the Forresters Car Club organised Tour of Caerwent on 24 March.