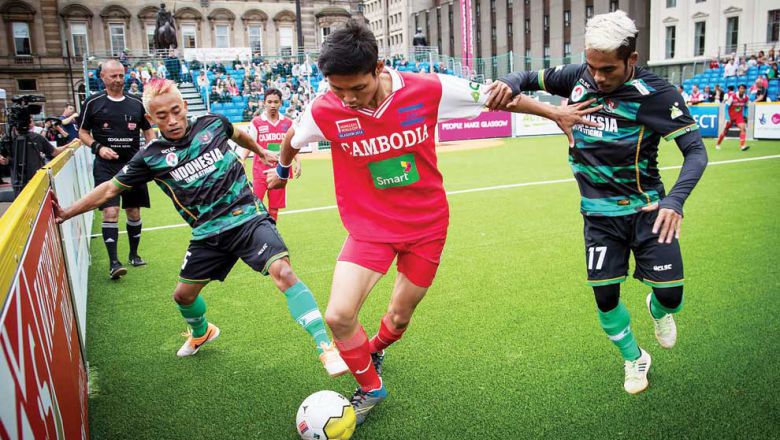 The Homeless World Cup in Cardiff's Bute Park will include men's and women's teams featuring 500 players from 48 countries.

The power of sport to change lives is sometimes an easy cliché, but the Homeless World Cup can justifiably claim to do just that. Callum Ellis looks ahead to the football tournament with a growing profile that is being staged in Wales for the first time this weekend.

A World Cup tournament comes to Wales this week – aiming to help some of the country’s most vulnerable people and also change perceptions on a pressing social issue around the globe.

The Homeless World Cup – an annual event which looks to combat the problem and alter the image of homeless people – gets underway on Saturday, July 27.

The iconic Bute Park will host the 17th edition of the tournament, with more than 500 players from around the world expected to descend on the Welsh capital.

Newport-born, Port Talbot-raised Hollywood star Michael Sheen, who is renowned for campaigning on social issues, was a catalyst in bringing the seven-day event to Cardiff – and hopes the tournament can kick-start a legacy in Wales.

“To help bring the Homeless World Cup to Wales this summer is a real dream come true for me,” said Sheen.

“We’ll welcome over 500 players from more than 50 countries and show them the sort of warmth and community spirit that the Welsh people are famous for.

“I want the Cardiff 2019 Homeless World Cup to be about creating a legacy of change informed by those on the frontlines of these issues and delivered by an entire nation together in a spirit of compassion and co-operation, qualities that we have long held dear and that have proudly defined us as a people.”

The organisation was founded by Keri Harris, who was tasked with grouping a team together for the first edition of the tournament in 2003.

Following the inaugural event in Austria, SFW was born and Harris now manages both teams.

Sheen is a patron of the charity, while Wales international Loren Dykes is among its ambassadors.

Dykes, who recently became the second player to reach the 100-cap milestone, is calling on the Welsh public to come out in their numbers in support of the event.

She said: “I’ve been working with Street Football Wales for a number of years and have seen first-hand the impact being part of this project can have on an individual’s life.

“Street football is by no means profound enough on its own to be able to rid us of social exclusion and homelessness – but it’s an important part of a bigger picture.

“With Michael Sheen now being involved, the media attention that’s come with it and the successful bid for the Homeless World Cup, it gives us a chance to raise awareness for the fantastic project and the people that work tirelessly for it.

“And to show the harrowing yet inspirational stories of people who have been through tough times and have worked to turn their life around with the support of those around them.

“Being part of something that gives their life a sense of meaning and belonging can be pivotal in building their confidence and social skills.

“The bigger picture is that hopefully it will raise awareness of homelessness and social exclusion which is – scarily – still on the rise. Ask yourself how many homeless people you see just by walking to the shop or going into your local town. It can’t be avoided and it’s there for everyone to see.

“It’s time to increase investment to help those who are vulnerable. There is already amazing work going on but we need homelessness to be more of a priority to find preventative measures.

“I urge anyone to go and support the tournament – it’s not often you get to say there’s a World Cup being held in Wales. Go and support and engage with these amazing people and be part of making what is already a once in a lifetime experience, even more special for those involved.”

Lauren Roper was selected by SFW founder Harris to represent the Welsh Warriors in last year’s tournament in Mexico City, playing between the sticks as a goalkeeper.

She previously experienced homelessness on the streets of Swansea and revealed that pulling on a Wales shirt in North America was a once in a lifetime opportunity.

“I had the opportunity to play in Mexico last year and it gave me confidence that I never thought I had,” said Roper. “It meant that I was noticed as not only a fairly good goalkeeper, but as someone who has respectable behaviour.

“I had more than just one person believing that I was good enough to be a representative for Wales – and to me that is an honour.

“It was a once in a lifetime opportunity that I never thought I would be good enough for.”

The 22-year-old says the experience of playing in the tournament has motivated her to helping others in similar situations and believes the event in Cardiff will help change perceptions of homelessness in Wales.

“It’s given me the chance to see a different part of the world which has made me want to travel. It’s helped me to meet friends and have an even wider network of support for help I need.

“It’s made me want to help others in the same situations that I’ve been in – and to introduce football as a coping mechanism.

“I think the tournament will also open the eyes of those who have been lucky enough to have never experienced homelessness and to show them that it isn’t always due to drugs and violence.”

The event is unticketed, free of charge, and fixtures are available to watch on a first come, first served basis.

Welsh Warriors – the female representatives – get the tournament underway against Greece on July 27, while the men’s side kick-off against Romania on the same day.

Each fixture is played on one of three 22m x 16m pitches, with matches consisting of two seven-minute halves.

There is a range of entertainment, street food and a debate tent also available to spectators over the course of the tournament.

The Manic Street Preachers’ James Dean Bradfield, Charlotte Church, Wigwam and Buzzard are among some of the Welsh artists and bands set to feature at the event.

11:50: Parade to arrive at the tournament site