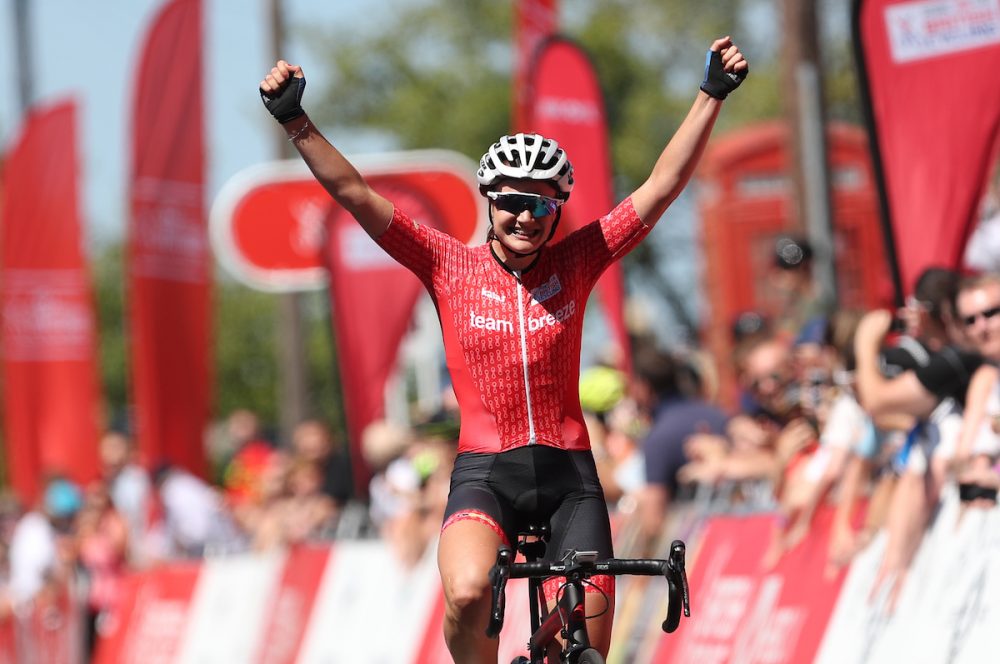 Jess Roberts has been named in Great Britain’s under-23 team for next week’s UEC Road European Championships in Plouay, France.

The 21-year-old from Carmarthen will line-up in the road race and the time trial at the championships which run from from 24th -28th August.

Fellow Welsh riders Ethan Vernon and Rhys Britton will join Roberts in the 23-strong GB squad in the elite and under-23 categories as top class international cycling continues following the COVID-19 enforced break.

Roberts underlined her potential when winning the national road race title in 2019 as a 19-year-old.

Last year she won the final two stages at the prestigious Tour de Bretagne Feminin in France before joining the Mitchelton-Scott women’s world tour team for 2020.

Roberts finished 34th overall, and 10th in the youth category, at the Herald Sun Tour in Australia in February including a fifth place on the opening stage of the two-day race.

Cardiff-born Vernon will, like Roberts,  double up in the under-23 road race and time trial where in the race against the clock he will be joined by top British prospect Tim Pidcock from Yorkshire.

He finished 14th on a stage of the Tour of Britain  last year before going on to represent Britain at the World Roach Championships.

Former Junior Tour of Wales points classification winner Britton, who has won a clutch of national titles on the track, will join Vernon for the road race.

The 2015 women’s road race world champion Lizzie Deignan will be joined by Lizzy Banks plus Alice and Hannah Barnes to contest the elite women’s road race, while Banks will also race in the time trial along with Hayley Simmonds.

Alex Dowsett will compete in both the elite men’s road race and time trial, and in the road race he will be joined by Gabz Cullaigh, Ethan Hayter, Matt Holmes, Tom Pidcock, Scott Thwaites, Matt Walls and Fred Wright.

Performance Director Stephen Park said: “With the road race calendar still understandably uncertain, the European Road Championships are now a key feature for the Great Britain Cycling Team’s road squad and as such we are sending a strong team with real medal chances in each category and discipline.

“For me, personally, it’s great to see so many riders who progressed through our Academy programmes and onto professional teams come back to represent the Great Britain Cycling Team again, which is a testament to the strength of our pathway structure.

“As a team, we are remaining optimistic about the road worlds taking place in some form, and the European Championships will serve as good preparations for that as well as providing a great racing opportunity in its own right. I know the team we are taking are keen to do the jersey proud, and I know the road team will be ready for whatever happens in the coming weeks.”