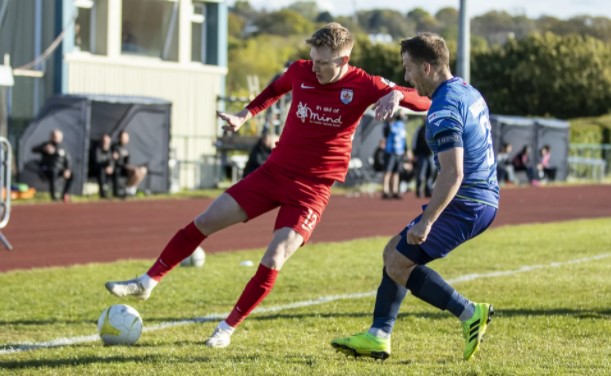 The title race in the JD Cymru Premier is expected to go to the wire after Connah’s Quay and The New Saints cancelled each other out in the final meeting of the season between the two sides.

In a nervy encounter at the Deeside Stadium, a tense performance from both sides ensured chances remained at a premium in the top of the table clash.

Only in the closing stages of the game did the deadlock ever look likely to be being broken and Connah’s Quay briefly thought they had made the breakthrough until the referee brought back play for a foul in the build-up.

With four minutes remaining, Michael Wilde, the Nomads’ hat-trick hero a week ago, found space to pull the trigger against his former club, but was denied as Ryan Astles made a timely block challenge to deny the veteran striker.

Midfielder Danny Redmond picked up two yellow cards in quick succession in added time as The New Saints completed the game with ten-men.

With the points shared, Connah’s Quay take a two-point lead into the final stretch of the games, with three rounds remaining.

The title race continues on Tuesday night with both Connah’s Quay and The New Saints heading to south Wales. Barry Town and Penybont can potentially have a huge say in how the league championship will be decided with both teams to face the top-two in the final two weeks of the season.

The Nomads will then face Carmarthen at home before travelling to Penybont for their final game. The New Saints meanwhile will then complete their campaign with back to back home games against Barry Town (next Saturday) and Bala Town.

Venables broke the 200-Cymru Premier goal mark as the Lakesiders claimed a 4-1 win over Barry Town that guarantees them a third-place finish.

Anthony Kay’s header gave the Lakesiders an early but short-lived lead as Nat Jarvis quickly restored parity with a headed effort of his own, a minute later. Bala went ahead before the break after an error from goalkeeper Lee Idzi left Venables with the goal at his mercy to claim his 200th goal.

A fierce finish saw Venables add to Bala’s lead in the second period before completing his hat-trick with his 24th of the season in added time.

Sion Bradley’s late equaliser rescued a point for Caernarfon after they were held to a 2-2 draw with Penybont.

Kane Owen and Lewis Harling had put visiting Penybont ahead after they trailed to Jacob Bickerstaff’s opener for Cofis.

Newtown are on the cusp of winning the Play-Off Conference without kicking a ball after Haverfordwest County fell to a 2-0 defeat at Flint Town United.

Joshua Amis and Alex Jones struck either side of half-time for the Silkmen to leave Haverfordwest six-points off Newtown, with three rounds remaining.
Newtown can clinch their play-off place if with a win at home to Cardiff Met on Tuesday.