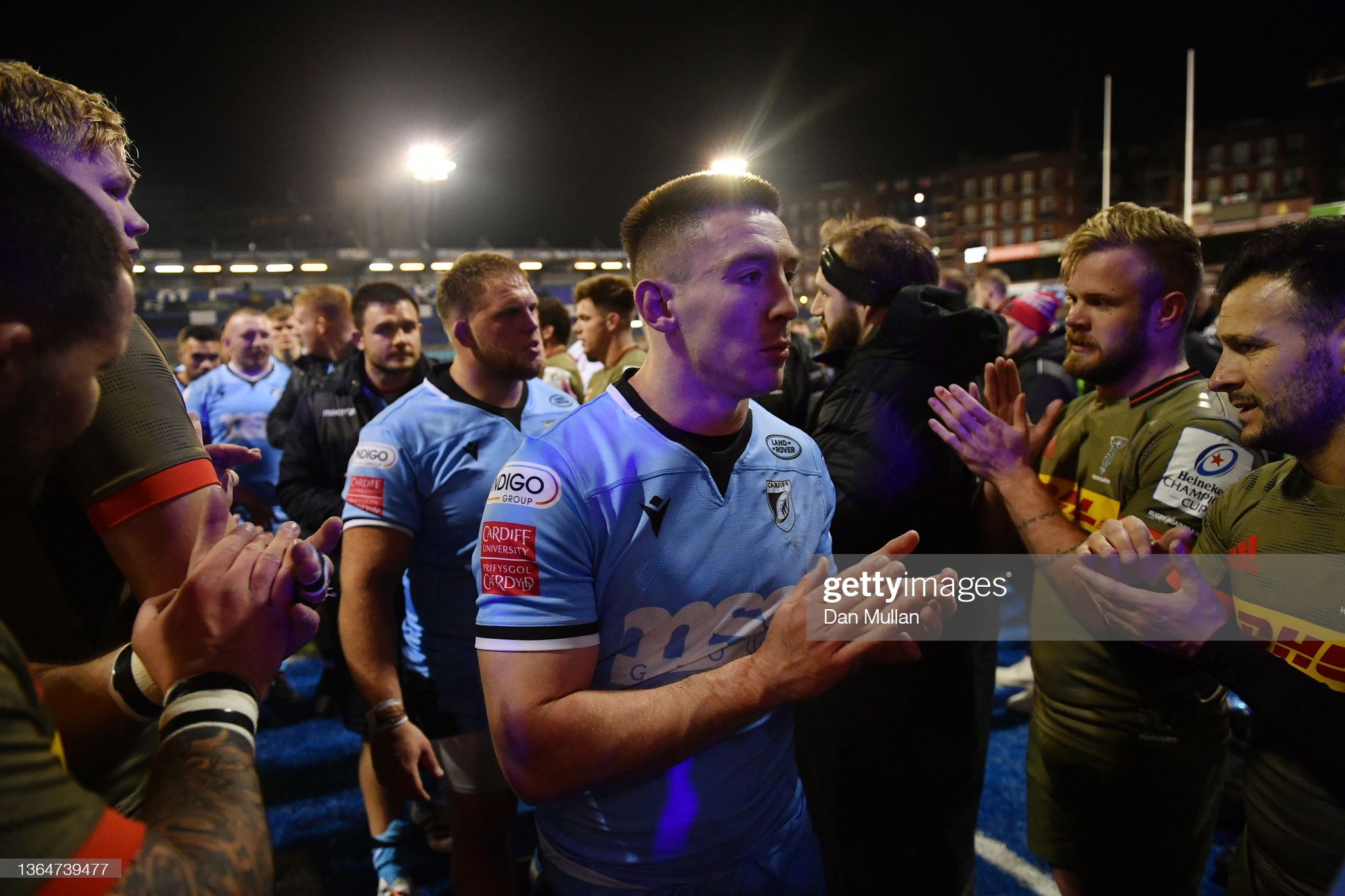 Dai Young has refused to be down-hearted by what appears to be the end of Cardiff’s hopes of making progress to the knockout stages of the Heineken Champions Cup.

The head coach has chosen, instead, to look on the bright side of his team’s 36-33 defeat to Harlequins – even though victory was offered up to the English champions in the closing seconds.

A mistake by Wales wing Josh Adams, who gave away a penalty when he tried to run the ball from deep with the scores tied at 33-33, was punished by the mercurial Marcus Smith, who had earlier scored a scintillating try to bring his team level.

It would be natural for Young to be thoroughly disappointed with the outcome but he was eager to praise his side’s efforts.

“There are lots of positives,” he said.

“The real pleasing factor for me is that we were unrecognisable from the team that played last week. That has been the challenge all week, to improve in all areas.

“We played some great stuff, scored some good tries. I think we left a few opportunities out there as well.

“With 19 minutes left and two scores in front, you’d like to think you can close those games out but if you watch Harlequins on a regular basis, that’s a regular day at the office for them. They’re never beaten until the final whistle.

“I’m really proud of the effort and the way we played.”

Quins’ winning penalty stemmed from Cardiff attempting to counterattack with the scores level to try and snatch a win.

The away side managed to earn a turnover at the breakdown to hand themselves the chance for the victory. Playing from deep, with 14 men, it would have been a tall order for Cardiff to get down the other end.

Kicking the ball out of play and settling for a draw would have been respectable for the home side, but Young insists this was not an option.

“I don’t know about putting it into touch, I’d have definitely gone to the air. We had a lot of joy in that area.

“I don’t blame us for trying to win the game but I think the best option would be to try and go to the air and see if we could get it back.”

In a match of the year contender with 10 tries, yellow cards for both sides, refereeing controversy and free flowing rugby, it was a shame it was played behind closed doors.

Fine performance by @Cardiff_Rugby last night, but Marcus Smith the difference. What a player. As Dai Young said afterwards: “He has a highlights reel every game”.

Due to the Covid-19 restrictions imposed by Welsh Government, crowds at sporting events will only be allowed after the 21st of January.

Had a crowd been present at the Arms Park, the atmosphere would have been immense.

“We understand the reasons why. But it’s nowhere near the same, trying to play rugby behind closed doors. It’s hard to get any feeling or atmosphere in the game.

“I thought that both teams went out and played rugby as it’s meant to be played. I’m sure people watching on TV would have enjoyed that game.”

It doesn’t get any easier for Young’s side, as they come up against  defending European Champions, Toulouse in the next round of the competition.

“We’re up against it,” admitted Young.

🃏 It had to be Marcus Smith. Harlequins win 36-33! #CARvHARpic.twitter.com/LytclvoYn2

“When you’re playing two champions, you’re going to have to do something special to advance.

“We’re going to go over there and enjoy it. We’re going to play rugby. We’re not going to chuck caution to the wind but we certainly want to take the game to them.

“Toulouse are another team that like to play that way as well so that could be another high-scoring event.”

Cardiff had their work cut out against arguably the form No.10 in the world in Smith. The 22-year-old played some irresistible rugby and was at the centre of everything positive that Harlequins did.

“He didn’t disappoint, did he?” said Young.

“Every time he touches the ball, something is likely to happen.

“In the first 10 minutes, he caused us lots of problems. He’s a bag of tricks but he also does the basics really well.”

Cardiff’s effort and attitude this season has been commendable with so many issues derailing their progress. At times over the winter period, they were without 40 players and staff.

Their efforts – going up against some of the best teams in club rugby, fully loaded with superstars – are to be applauded.

“I think anything that could have gone wrong has gone wrong,” said Young.

“We felt we went into the autumn period in good shape, went to South Africa and had to go through quarantine.

“A lot of the players picked up Covid at home as well.

“I’m really pleased with the boys. But we’ve got to back it up again next week.”