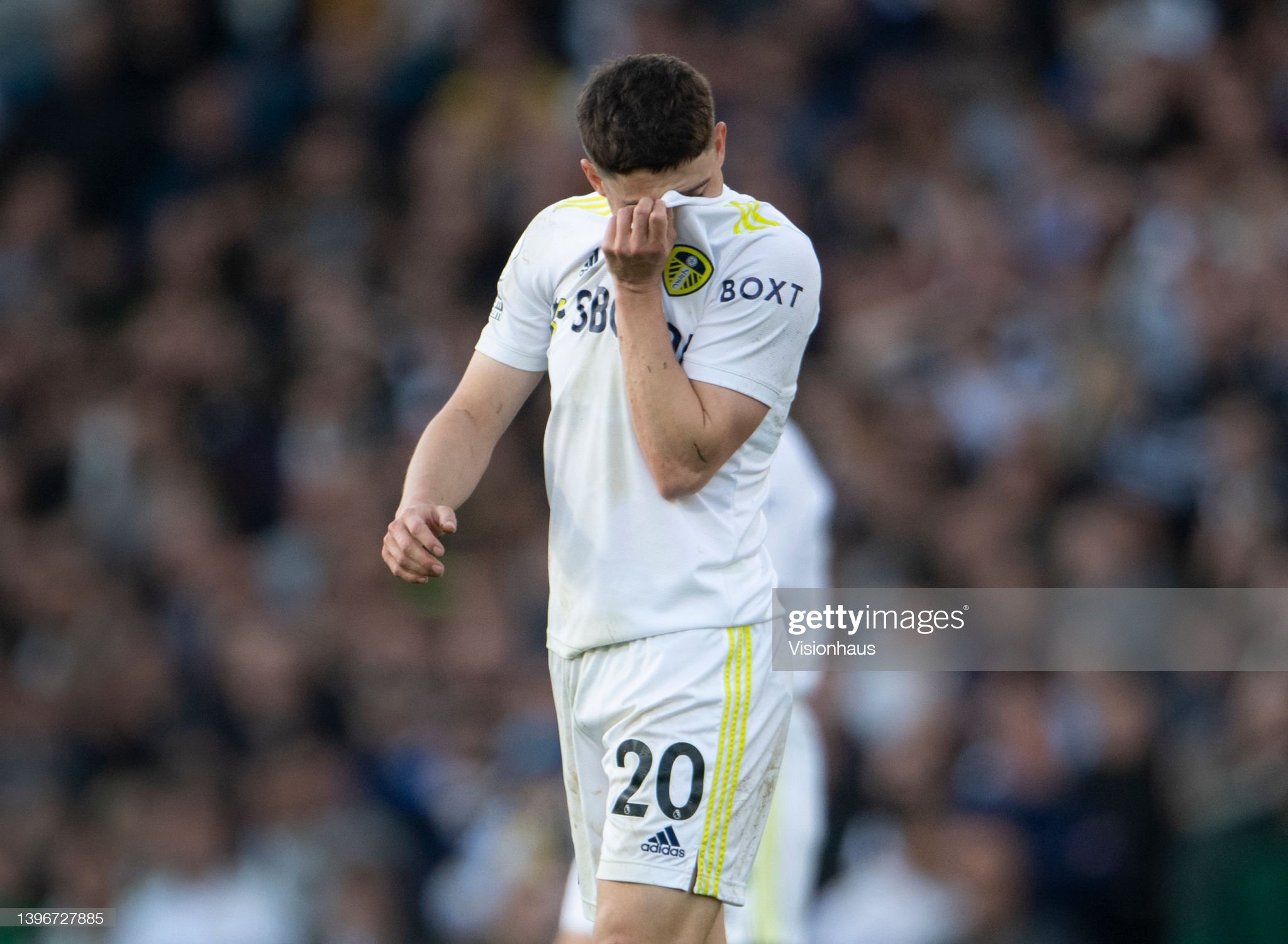 Dan James reacts after his sending off. Pic: Getty Images.

Dan James “feels terrible” over the red card that has ruled the Wales star out of Leeds United’s crucial Premier League run-in.

Replays showed James made contact with the ball first, but was off the ground and out of control when his foot then struck Kovacic’s shin.

He will be banned for three Premier League games, meaning he will miss relegation-threatened Leeds’ final matches against Brighton and Brentford as they scramble to get out of the drop zone.

It also means he will not play again until Wales play Poland in a Nations League match on June 1, before their crunch World Cup play-off final at home to either Scotland or Ukraine four days later.

Marsch refused the pin direct blame on James – whose sending off was the first of his professional career – and said the player did not set out to deliberately injure his opponent, but admitted James had crossed the line.

Graeme Souness had no doubts that Dan James’ “reckless” tackle was a straight red card 🟥 pic.twitter.com/LTjftQPHHj

Marsch admitted he had not seen a replay of James’ tackle when addressing the sending off afterwards.

The Leeds boss said he was “told it was a red”, adding James felt “terrible” for the challenge which could rule Kovavic out of Saturday’s FA Cup final.

“Dan said he didn’t mean to do it, he was just trying to be aggressive to win the ball and caught him in a little bit of a bad way. Dan feels terrible,” said Marsch.

Leeds became the first Premier League side to receive 100 cards in a single campaign, with James’ first-half red followed by a yellow for Kalvin Phillips.

James’ sending off came after Mason Mount had already put Chelsea in front, with Christian Pulisic and Romelu Lukaku rounding off a comfortable night for the visiting side at Elland Road.

“One thing for sure I’m not going to sit here and blame anyone,” added Leeds’ American boss Marsch.

“Our guys come everyday and they do everything they can, they stick together, they fight for each other, even on the third goal you see guys diving around the box doing everything they can to keep themselves in this league and in this match.

“I love these players, they fight to the end and we have to find ways to rewards ourselves and not go down in matches and stay even.”

Having slipped into the relegation zone after the weekend defeat to Arsenal, Leeds now face an uphill battle against the drop.

They host Brighton on Sunday before travelling to Brentford in their final game of the season on 22 May.

“We want to learn from these moments so that we don’t repeat these situations and mistakes,” Marsch added.

“We have six points left, the first come on Sunday against Brighton and we have to do everything we can to recover, be mentally strong and be ready for the next challenge.

“Someone asked me if it was a psychological project, I said ‘it’s been like that since I’ve been here, really’. That’s where we are and we’ll recover and get ourselves ready.”

One thought on “Dan James “Feels Terrible” . . . And Red Card Means His Next Games Will Be For Wales, Not Leeds United”