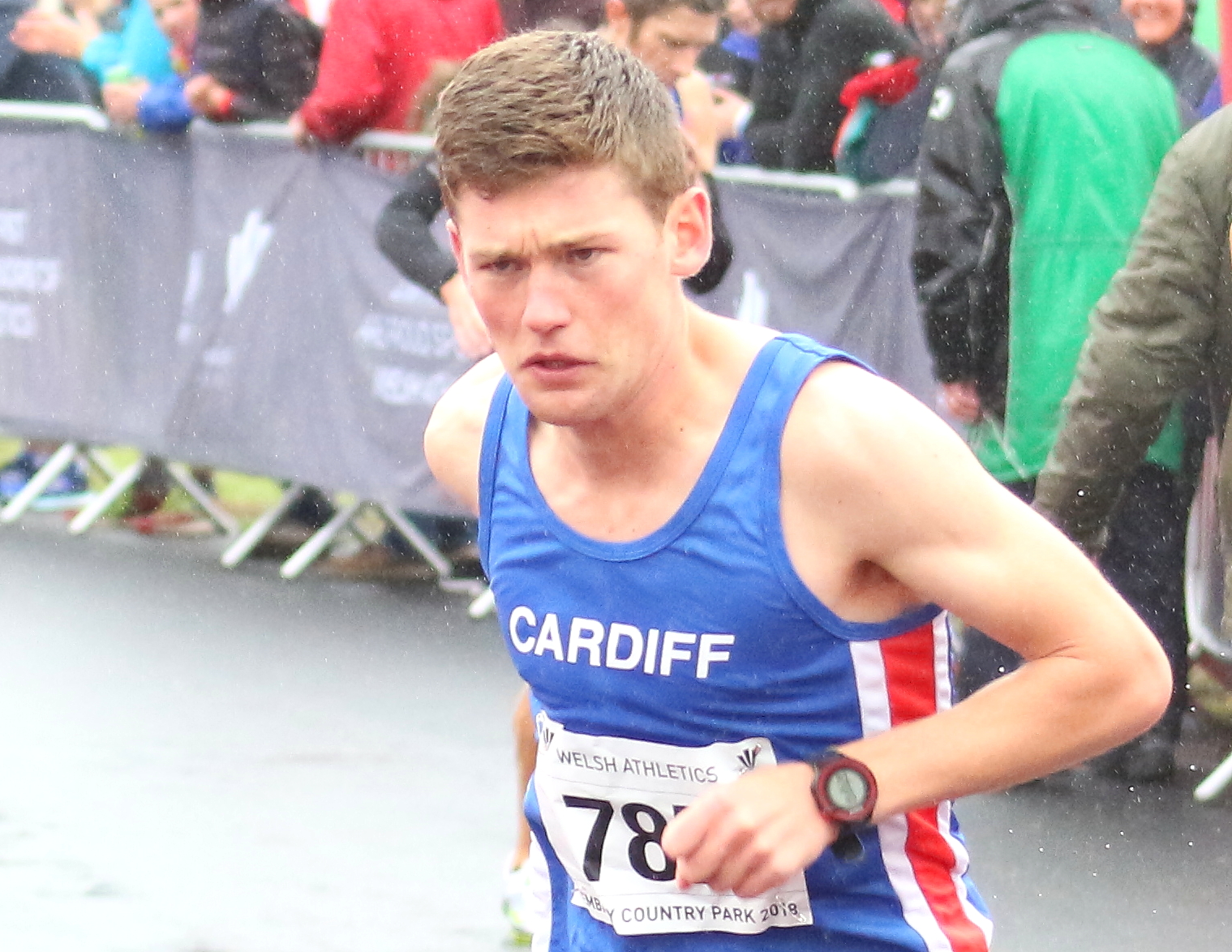 Cardiff AC’s Dan Nash will compete in the elite-only London Marathon on Saturday. As Owen Morgan revealed back in August, he got the chance partly thanks to a speculative tweet to the organisers though his performances over the distance -and beyond – played a significant part. As the big day gets closer, Dai Sport reruns the original story.

A speculative tweet to the organisers of the Virgin Money London Marathon has led to a Cardiff distance runner taking part in a unique race involving the world’s greatest athletes.

Due to Covid-19 restrictions, this year’s London Marathon will be an elite-only showdown involving the likes of endurance legends Eliud Kipchoge and Kenenisa Bekele and run in a secure biosphere at St James’s Park on October 4.

When the race, organised to replace the usual mass-participation event, was announced earlier this month, Dan Nash was keen to a part in the historic occasion, which also marks the London Marathon’s 40th anniversary.

The British 50k record holder tweeted: “Hey @LondonMarathon, any chance you want to expand the domestic field by a few places? There’s a 2:18 guy (and 50k GB record holder) here who would love to make his London debut!”

Hey @LondonMarathon, any chance you want to expand the domestic field by a few places? There’s a 2:18 guy (and 50k GB record holder) here who would love to make his London debut!

When the stellar line-up featuring some of the world’s greatest marathon runners, along with a sprinkling of Britain’s top performers was announced, Nash’s name was amongst them, much to the Cardiff athlete’s delight.

“I’m really excited about it,” Nash told Dai Sport. “I sent out that tweet because I was hoping they would add more domestic athletes.

“I was lucky that a couple of people saw it and then passed me the email address of the athlete organiser and I sent him an email, so that’s how I actually got in.

“I don’t know whether the tweet helped or not but it certainly got quite a lot of support. I referenced the tweet in my email saying this is how many people liked it an re-tweeted it. I don’t know if that was a factor, but anyway it seemed to work!

“I was joking to my friends just now that maybe I should pay for it so I can see the finish . . . to see what happens on the last kilometre.

“I’m sure I’ll be seeing plenty of them as they lap me! It will be really exciting, that Bekele – Kipchoge showdown will be something else.”

Alongside Bekele and Kipchoge, the two fastest marathon runners of all time, the men’s race will include eight athletes who have run sub 2:05 marathons

Whether the tweet helped or not, and despite his self-deprecating comments, Nash will be toeing the line on merit having clocked 2:18.51 finishing fourth at the Brighton Marathon last April.

Then, in September, Nash won team and individual bronze medals at the International Association of Ultrarunners 50km World Championships in Romania.

As well as rubbing shoulders with the likes of Kipchoge and Bekele in the men’s race and world record holder Brigid Kosgei in the elite women’s race – featuring five other women who have run inside 2:20 – Nash will have a number of fellow Welsh competitors for company.

The fastest Welshman in the field will be North Wales athlete Charlie Hulson. The Liverpool Harrier has a personal best of 2:14.12, clocked on his debut over the distance at the Valencia Marathon last year.

Hot on his heels PB-wise will be Swansea Harrier Josh Griffiths, who has a best of 2:14.25, set under more conventional circumstances at last year’s London Marathon.

The Swansea Harrier has fond memories of London, having shocked the athletics world in 2017 as the fastest British finisher, a performance that earned him a place at that year’s World Athletics Championships marathon, also held on the streets of London.

The sole Welsh athlete in the women’s elite line-up will be Natasha Cockram, who has made huge strides over the distance during the past three years.

Having run 2:49.34 on her debut in 2017, Cockram last year clocked 2:30.49 at last year’s Dublin Marathon, making her Wales’ fastest ever female marathon runner.

Cardiff Athletics club member Nash will also have plenty of clubmates amongst the pace makers for October’s race.

Fellow Cardiff club athletes Matt Clowes and Jake Smith will be pacers in the men’s race, alongside a certain Sir Mo Farah, who was recently training alongside Josh Griffiths at Font Romeu in France.

Nash says the strong Welsh contingent in such a high profile race is an indication of the current strength of endurance running in this country.

“It’s definitely going in the right direction. From what I have seen over the last few years, it has become quite a bit more professional which has helped.

“The set up at Welsh Athletics . . . there is better support, it’s more specific, more tailored. Chris Jones coming in as the head of coaching, he was head of endurance, it’s made a massive difference.”

Nash is also doing his bit in helping to nurture the next generation as a coach and in his work as a PhD student researching training and load monitoring.

“I deliver the South Wales regional development programme for mostly under 15 and under 17 athletes,” said the 26-year-old.

“I am also doing a PhD in exercise physiology with Welsh Athletics, Welsh Triathlon and Cardiff Met. I do their physiological testing for the endurance guys as well.”

But he also has plenty of targets to achieve in his own running career, although he would like to add the British 100K record to his 50K mark, for now, he will be focussing on the “shorter distances”.

Amongst those ambitions is winning a place on Wales’ marathon team for the Birmingham Commonwealth Games in 2022 – a feat he acknowledges will be tough considering the strength in depth of talent within the country.

“The men’s marathon team is getting harder and harder to make,” says Nash. “You’ve got people like Charlie Hulson, Josh Griffiths, Dewi Griffiths and Andy Davies. There may be a few more making debuts in the run up to that as well.

“I think I can make the qualifying time. You never know with the marathon, so many things can happen. If I can run my time I think there’s a chance. I’d like to improve my marathon time anyway.”

And he is hoping London could be the place to take a chunk out of his marathon PB.

“I’m in better shape than I have been for any other build up – for my 2:18 marathon, or my 50k – so as long as things keep progressing I definite think I can PB.

Nash says the closed course around St James’s Park will certainly provide some unique challenges with its relatively short laps rather than the traditional course.

“It’s just over 2k-a-lap over 19-and-a-half laps, so that will be quite interesting. World Champs are normally laps, but they are usually 10k laps. Some people will find it quite tough psychologically I think.

Enjoyed this. Well worth a watch! https://t.co/6xieWlDtQ5

“But I think it will encourage people to go off even faster than they normally would, especially when you have got such a fast field. I think you will have to be careful over those first few laps that you don’t get carried away and go off too hard.

“I’m normally quite good at pacing so maybe that will help me. It will definitely be interesting . . . it’s going to be different.”

Although he will miss out on many of the normal characteristics of a conventional London Marathon – it will still finish on the Mall – Nash is delighted to be part of such a historic occasion, which could potentially feature a new world record.

“It’s not going to be the same in some ways, but it will also be quite exciting to say I was there that day.

“It’s just a few guys and girls running around St James’s Park! If I could see the world record going that would be even more special . . . we’ll see what happens.”