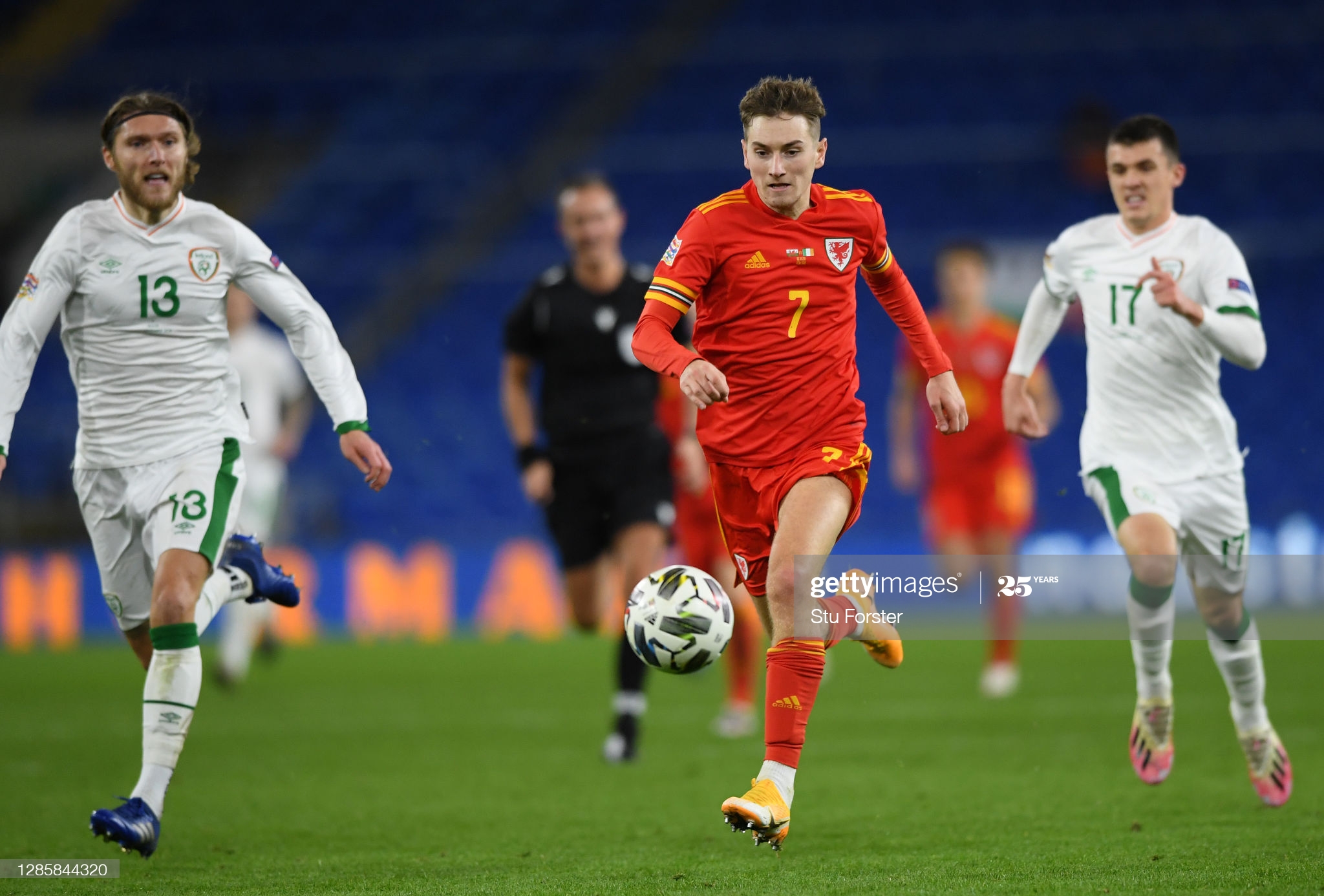 David Brooks in action for Wales against the Republic of Ireland. Pic: Getty Images.

Wales take on Finland at the Cardiff City Stadium tonight as they bring down the curtain on the group stages of their Nations League campaign. For Wales and Bournemouth striker David Brooks, though, this feels more like the start of something after a year out through injury, as he tells Graham Thomas.

David Brooks insists he will attack Wales’ final match of their Nations League group stage campaign with the same optimism and determination that has seen him through the worst year of his career.

The Bournemouth striker will face Finland on Wednesday night at the Cardiff City Stadium, where a point will be enough for Wales to win their group and ensure promotion to the tournament’s top tier.

Brooks believes a positive attitude flows through the Wales squad at present and they should feel confident of beating the Fins in a match that will be shown live on S4C.

The 23-year-old – who scored the only goal of the game in the victory over the Republic of Ireland last Sunday – says: “We’ll attack Wednesday in the same way we did against Ireland, knowing we are probably the better team and we should win that game.

“You just have to look at the quality in our dressing room, we don’t go into any game thinking anything else other than getting three points.”

With Premier League players around him, like Gareth Bale, Ben Davies, Daniel James, Ethan Ampadu, Joe Rodon, Neco Williams and Danny Ward, Brooks is reminded of the level he was playing at every week before two ankle operations left him on the sidelines for over a year.

He returned this summer, but not before Bournemouth had slipped back down into the Championship – a status change he admits he would far rather have avoided.

“Everyone wants to be playing at the big, nice stadiums and on the big occasions hopefully, when the crowds are back in.

“We are all working towards that and, with the squad we’ve got, we’ve got a really good chance.

While Bournemouth were struggling last season without him, Warrington-born Brooks – who qualifies for Wales through his mother – brightened his own dark times by seeking some healing sun in the Persian Gulf.

“I went out to Qatar for a few weeks that added up to a few months and a lot of people helped me get back to where I am now, but the main focus for me was to get back fit, to get back into the Bournemouth side, and then the Wales side.

“I’ve just been looking forward to that and that’s been keeping me going.

“That’s always a worry when you get injured, especially after you’ve been out for 12 months. I was working really hard and then the lockdown hit, I had a few games but unfortunately we got relegated, and this season has been a bit stop start with little niggles.”

Wales will go into tomorrow’s match buoyed by impressive statistics which show it is now over 700 minutes since they last conceded a goal in a competitive fixture.

That seven match unbeaten streak in tournament games is the bedrock which the Fins must try and penetrate, something they were unable to do two months ago when Wales won the reverse fixture 1-0.

But Finland, managed by the bookish-looking former schoolteacher Markku Kanerva, will be no pushovers and will come armed with the most impressive of recent victories.

Last week, admittedly in a friendly fixture, they beat world champions France 2-0 in Paris, thanks to goals from Brentford’s Marcus Forss and Onni Valakari, both 21-year-olds making their debut appearances for the senior national team.

The Fins also have Teemu Pukki in their ranks, the Norwich City striker who scored 18 goals last season, despite Norwich’s relegation from the Premier League.

Finland are only a point behind Wales in the Nations League group and such has been their form that many are predicting they could have a similar impact at the delayed Euro 2020 finals next summer to the one Iceland managed at Euro 2016, where they knocked out England.

But Brooks adds: “Every goal you score is it is going to add to your confidence and make you believe in yourself that little bit more, so it was nice to get on the scoresheet against Ireland and hopefully I can again on Wednesday.”

Live international football from the UEFA Nations League. Wales’s Nations League campaign started against Finland in Helsinki and the campaign ends against the same opponents in Cardiff.