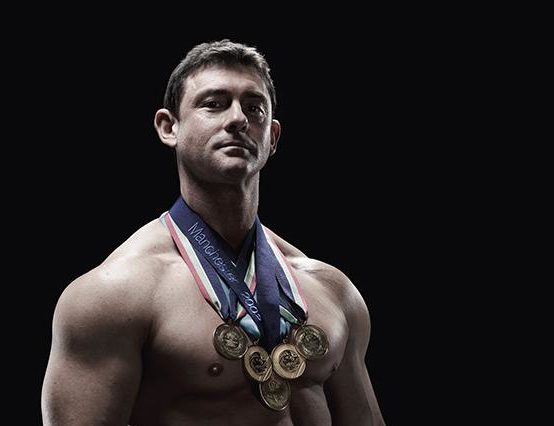 David Morgan was a one-man gold machine. The Welsh weightlifting legend has been a fitness advisor to many, but now he tells Owen Morgan he’d be happy to help unearth another jewel for Wales.

Between 1982 and 2002, Welsh sports fans knew they were virtually guaranteed to be celebrating at least one gold medal when David Morgan was competing at the Commonwealth Games.

The nation’s most decorated weightlifter won a total of nine golds and three silvers wearing the red of Wales – making him the first man in any sport to win medals at six separate Commonwealths.

As the 2020s were rung in on January 1, the remarkable feats of the Cambridge-born strongman were finally recognised in the New Year’s Honours list.

Although it is almost 20 years since the last of his Commonwealth crowns in Manchester, the 55-year-old is glad he and the sport to which he has dedicated so much of his life, have been recognised with an MBE.

“I can only think of two other weightlifters that have had an MBE – Precious McKenzie and Michaela Breeze, so it’s nice to get recognised in that way,” says Morgan, who won his first gold as a 17-year-old in Brisbane in 1982 to become the youngest ever Commonwealth weightlifting title winner.

“I think the problem is that we don’t have that many people who are really good. For people to be interested you need winners, don’t you?

“I think weightlifting in Great Britain has never been as popular as athletics, or football, rugby or cricket.”

Morgan says he didn’t enter weightlifting for fame and fortune. “I was never really bothered that it wasn’t that mainstream.

“I wasn’t doing it to be famous or a celebrity, or to earn my living. I was doing it because I was initially interested in physical fitness and improving myself and weightlifting was something I fell into.”

As well as his record-breaking success at the Commonwealth Games, Morgan also competed at three Olympic Games, twice coming close to a medal. All this while holding down a day job and getting by on limited funding and the support of family and friends.

The former junior world champion said of his Olympic appearances: “In 1992 I was injured so that was a write off. In ‘84 I should have been 10th but came fourth because there was the boycott. Although two months later I did lift more than the guy who won, so it was a timing issue.

“In ‘88, I should have actually won that, but I got dysentery two weeks before, so my lifts were down, but in training I’d done as much as the guy who won it. But I was in hospital for four days and it just knocked my edge off.

“But that’s how it goes, isn’t it? That’s sport. You can get an injury, you can get ill, these things happen, whereas with the Commonwealth Games I was luckier regarding injuries.”

Morgan achieved what he wanted from the sport, but says would-be weightlifters need to know what they want out of the sport before taking it up seriously.

“Youngsters today have a lot of distractions with mobile phones, gaming and all the different things. A lot of things are pulling them in other directions.

“I think if you said to somebody, ‘first of all you need the genetics, if you’ve got that, then you need to do six small sessions a day for 10 years and then you might get to the world championships and you might get a medal’, I’m not sure how many people would want to do that.

“If you’re not doing it because you love it, then weightlifting probably wouldn’t be the route to go.”

However, Morgan, whose father was from Pontypridd, would be interested in helping to develop young Welsh talent if his services were required.

“I wouldn’t mind,” he says. “Ray Williams is doing a lot of stuff for Welsh Weightlifting, he’s very good. He helped someone to win a gold medal at the last Commonwealth Games, which was pretty impressive.

“If someone asked me, depending on what time I’ve got available and what they want me to do, I’d consider it. I’m obviously interested in weightlifting because it’s been such a big part of my life.”

As a full-time fitness instructor, Morgan is also an advocate of the health benefits of lifting weights, especially for older people.

“So, lifting weights, doing deadlifts and squats and benches – that’s what I do now. I have people in their 70s who come and train with me.

“If you do it properly, it’s a sort of fountain of youth because you maintain muscle, you maintain functionality – provided you aren’t doing too much and providing you’re doing movements that are not going to injure you.

Congrats to my old mate David Morgan for being awarded his MBE for services to Weightlifting. Golds at five games spanning 20 years. Most decorated athlete in the CG history. @sportwales @WelshWeightlift @hawfc @GBWeightLifting pic.twitter.com/crYNzsz8JZ

“Weightlifting probably isn’t the best for people over 50 but weight training, the slower movements done for higher reps is very beneficial. I think that everyone should do half an hour twice a week.

“I think if everyone did that you would have a lot less falls, knee replacements and everything else. It’s served me really well.

“I’ve been doing it for 25 years, The youngest I’ve got is about 50 and the oldest I’ve worked with are 90, and they’ve all done weights.

“The people in their 50s, you’d be amazed, provided you give them a proper balanced progressive routine. It’s amazing the improvement they can make in six months.

“Most people in six months, doing two sessions a week, can increase their physical strength by about 100 per cent. That is a massive change from just doing some progressive weight training.

“And, of course, if you double your strength at 50, if it halves again by the time you’re 80 then you are where you were when you were 50, when you’re 80! Your quality of life is greatly improved, so from that viewpoint I would recommend it.”

Morgan, who still holds five masters’ world records, launched a comeback last year at that level, but a knee injury meant he was forced to abandon his return.

“I was limping around for six months until it healed and I thought ‘do I really want to be limping around? No’. I know I could have broken the records but I discussed it with my wife and we decided it wasn’t worth it.

“I don’t want another two world records and then be limping around when I’m 60. I want to be functioning properly and doing the things I want to do.”

Morgan is content with what he achieved in the sport.

“I’m happy with it. A lot of the stuff, I had to work out myself and I was lucky I met a guy early in my career called Den Welch, who ran the Empire Sports Club in Bristol and did a lot with Welsh weightlifting.

“He was ahead of his time and he helped me out quite a lot with all the different things that people weren’t doing. He was ahead of the curve on that.

“I had a bit of luck meeting him. Luckily, my body was able to respond to that kind of training.

“I’m happy with what I did. I’m proud of it, my mum and dad were proud of it.

“And I’ve come out the other end in one piece, which is a good thing.”