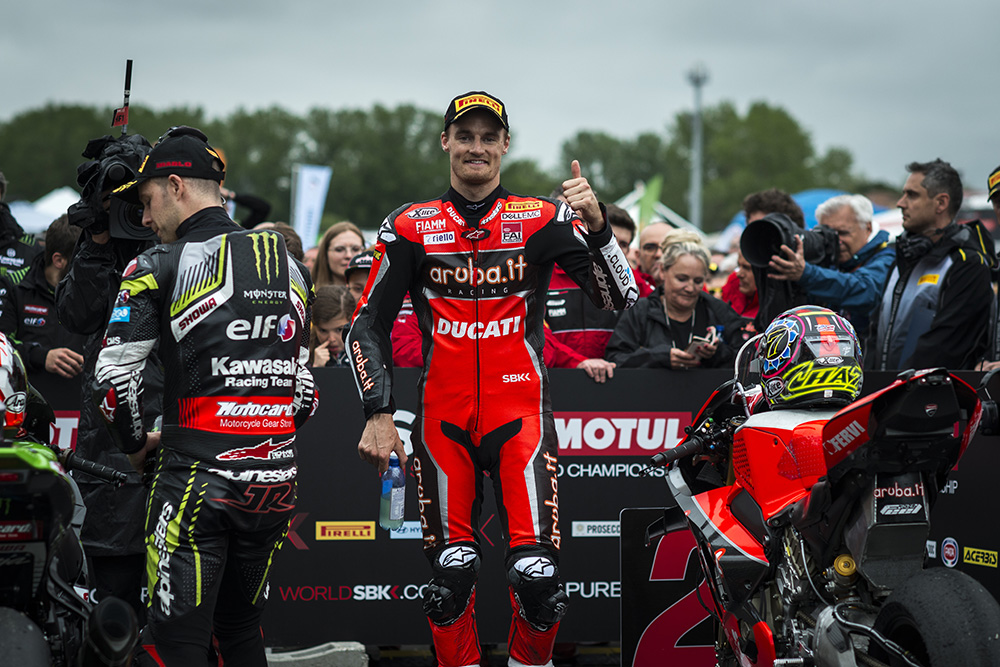 Chaz Davies happier with his feeling for new bike despite weather frustrations at Imola.

Chaz Davies says he is finally getting to grips with his new bike despite seeing his team’s home World Superbikes race turn into a wash-out.

The Knighton-born rider bagged his first pole on the Ducati Panigale V4 R bike only to see his victory hopes in the first race at Imola end on the first lap with an electrical fault.

Davies took second in Sunday’s Superpole sprint race finishing ahead of Aruba.it Racing team-mate Alvaro Bautista – who has won the opening 11 races until finishing second on Saturday – for the first time this season.

But any chances of following that up with more points in Sunday’s feature race were dashed when it was cancelled during to heavy rain on the track.

But after a difficult start to the season on the new machinery, Davies is beginning to feel more comfortable and confident to push for stronger results in future races.

The 32-year-old is now sixth in the standings with 85 points while Spaniard Bautista has 263 points – 43 more than defending champ Jonathan Rea who triumphed on Saturday and in the sprint race.

“After a tough start to the season, I’m starting to see the light and my feeling with the Panigale V4 R is improving all the time,” said Davies, who has finished runner-up in the championship three times.

“I go home from Imola knowing that I’ve made a lot of progress in view of the next races.”

Davies had grabbed the lead from pole in the 10-lap Superpole sprint which took place win a dry track before a mistake at Variante Bassa at the end of the opening lap dropped him down to third.

But he managed to pass his team-mate, setting fastest lap and the new circuit record on the way, but he was unable to close the gap separating him from Rea.

Riders took to the grid to check conditions for the longer second race, but it was scrapped due to the rain on safety grounds.

“It’s a bit of a shame we never got the chance to do race 2 here at Imola but unfortunately in the wet this track has quite a few limits,” said Davies.

“Imola is not a normal circuit, and with these ups and downs you get a lot of standing water especially in the corners and these conditions meant that they had to cancel today’s race.

“It was the right decision, but I’m sorry for all the fans who stayed here in the rain all afternoon just to see us race. The positive thing is that we managed to do the sprint race, and judging by the result, it was a pity not to have been able to do the full-length second race.

The next and sixth round of the championship will be at Jerez de la Frontera in Spain from June 7-9.