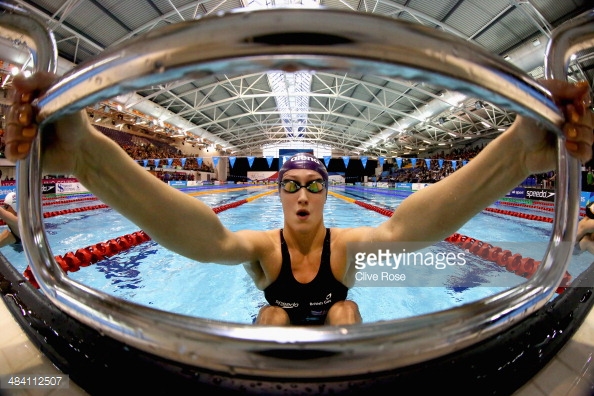 Georgia Davies one of four Welsh swimmers in the ISL meeting in Hungary. Pic: Getty Images.

Georgia Davies – world, European and Commonwealth medallist and Energy Standard athlete – has welcomed the International Swimming League’s financial package for swimmers as good news amid the relentless darkness of the coronavirus (COVID-19) pandemic.

On top of the financial package, all 10 teams have been invited to an all-expenses paid solidarity camp in October-November which will involve both training and competition and where the athletes will be the subject of some sort of reality TV show.

Davies, who had decamped from her Energy Standard training base in Gloria, Turkey, to north London, told Swimming World: “It’s nice to have something a little positive to look forward to because the news at the moment is quite negative non-stop so it’s nice for us to get some good news.

“First it was nice to have the dates of the new Olympic Games schedule confirmed and then with regard to the ISL which we all loved so much last year, it was so much fun. So it is really cool to hear about this solidarity agreement.”

She added: “It is really hard to tell what will and won’t be affected. I think so many companies are going to be hugely negatively affected by the coronavirus, a lot of people are going to suffer financially so I don’t know how that will affect different people’s sponsorship agreements and things like that.

“I think having this support from the ISL – a regular scholarship coming in – is going to be really invaluable.

“Just to allow people to carry on with their training and not stress out about things.”

The 29-year-old is now on British Swimming’s world-class programme funding but for about three years Davies did not qualify for any investment provided by UK Sport.

Although she received funds from Welsh Swimming, Davies understands how precarious funding can be, saying:

“I can’t say I’ve ever had that situation where I’ve not had any funding. Even when I’ve not been on British funding I’ve been really fortunate to have support from Welsh Swimming and it is a smaller amount but it is still really nice to have that support.

“Also, I have been part of Energy Standard since February 2017 so I get a lot of support from them as well.

“I know for a lot of people if they are taken off British funding that could have been their only source of income.”

Davies also welcomed the prospect of the training/competition camp as a similar set-up to her base in Turkey where she is coached by James Gibson and which she believes the team will be attending.

She said: “I think that is the plan. It’s quite early days and I don’t know too many of the details but basically I live abroad and I train abroad so to some extent I do what some people would consider a training camp for a lot of the time.

“I find that very beneficial, I really enjoy it. I love travelling, I love being in the sun.

“I think it’s a really great way to have competition as well – within training – and getting lots of people together with international swimmers going head to head and pushing each other.

“We often have guest swimmers who come and visit us out in Turkey with Energy Standard and I think it is really beneficial for our training and that would be something I would be really interested in.”

As for the ISL competition, Davies has nothing but praise with victory at the grand finale in Las Vegas back in December 2019 still fresh in the memory.

She said: “The great thing about it is the whole package. I have to say for me I just loved the whole team aspect of it and that’s the only time where you are more worried about swimming well because you don’t want to let down your team-mates and you want to  get as many points as you can for your team.

“I think it brought a really different dynamic to racing and one that everyone really seemed to enjoy. We still tried to race as fast as we cold but rather than it be for a medal or individual glory, it was all just for the team.”

This article first appeared on swimmingworld.com.

One thought on “Georgia Welcomes ISL’S Backing In Choppy Waters”