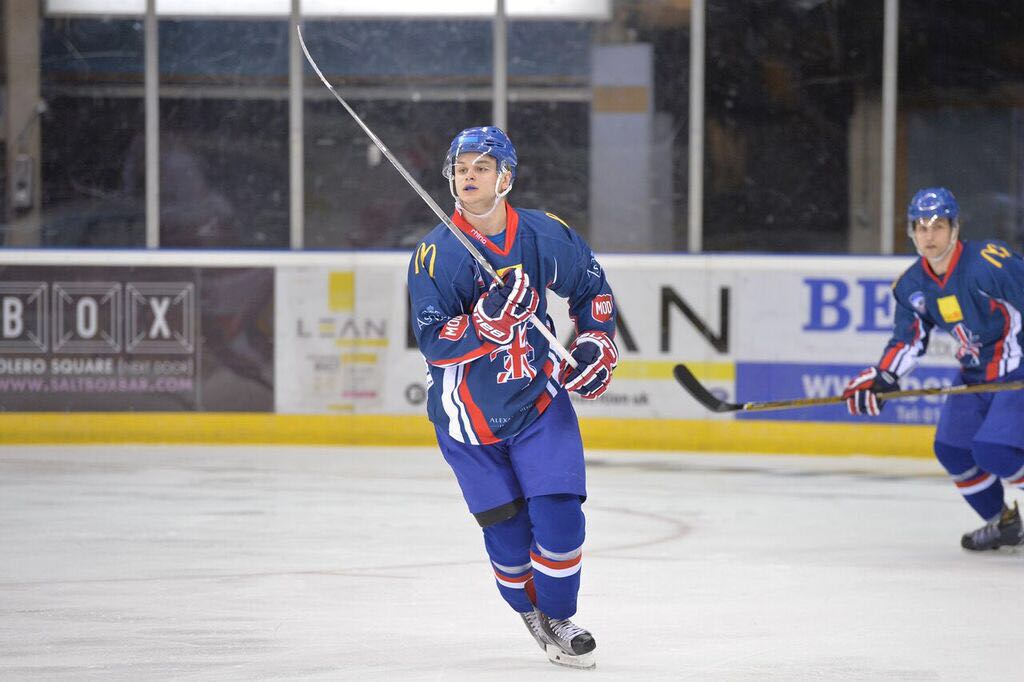 Sam Duggan is proud of his grandad, Percy. But there is a feeling he let him down.

Percy was a professional footballer who played for Queens Park Rangers, but Sam says: “I’m afraid the football gene skipped a generation in my case.”

Duggan is a huge signing for Cardiff Devils, at 20-year-old one of the best, if not number one, prospects in British hockey,  and says he is intent on staying in South Wales long term.

He made his debut against Coventry Blaze away on Sunday, while he will skate out in front of Devils fans for the first time when Blaze visit the Viola Arena this Saturday.

“My grandad on dad’s side played for QPR and was really good,” says Duggan. “Percy Duggan was a professional footballer, but I’m afraid the football gene skipped a generation in my case.

“I’m really bad at football. I do have a soft spot for QPR and Reading. Their ground is five minutes walk from my family home and I’ve been to a few games at the Madejski Stadium.

“I’m not the biggest fan of football, but I enjoy watching matches occasionally.”

Duggan admits playing for Great Britain in the World Championships again is a dream, saying: “If I play well for Devils then I’ll have a chance.

“I am going to focus on this season and having a great season. My wish is to stay in Cardiff and be part of this organisation. I will take it a year at a time, but Elite League hockey is at a standard where they are competing with top Europen leagues.

“This is a great place to be. I am so excited.

“GB is a personal goal, of course. Playing in Belfast two years ago was a great experience and it disappointing not to crack that in the last World Championships.

“I didn’t get the call, but I’ll be giving it everything I have this season. That means playing at my best for Cardiff Devils and that is what I am focused on.”

Duggan is 20-years-old, but he carries that age with a maturity and confidence which gives him the aura of somebody intent on making the most of his sporting prowess.

Older brothers Tom and Ben played for Guildford and they have been inspirational and influential people in a playing career which has so far taken him from England to Sweden, America and Wales.

There is no question he is ready to settle in Cardiff for a few years at least and play his part in Devils’ quest for ice hockey glory.

Duggan made his Devils debut against Coventry Blaze away and looks likely to link up with Matthew Myers and Scottish winger Craig Moore in a forward line which will give opposition teams plenty of problems.

Latvian-born Toms Rutkis, who celebrates his 21st birthday in November, has been outstanding at Elite League level. He is on a two-way contract with Swindon Wildcats and will play on a regular basis for the National League team and gain experience though plenty of ice time.

Duggan talked about his time with Jamestown Rebels in New York and his four-year spell in Sweden.

“It all happened so fast,” said Duggan, who is clearly overjoyed with his move to Cardiff which involves studying for a degree at Cardiff Met University.

“I started the season in upstate New York and made a decision to head back home. I had been at home in reading just over a week before joining Cardiff.

“Signing for Devils is absolutely the right decision and I’m really excited about the rest of this season and beyond. I moved to Sweden when I had just turned 16 and lived along with a flat-mate, which was great.

“But it was fantastic to be back with my family. My brother has a little boy on the way and it was special to spend time with them.

“They are also only a couple of hours away from Cardiff and they are excited about that.

“This club has a winning mindset and have been remarkably successful. I want to be part of that.”

Duggan speaks the Swedish language fluently, learning during his four years playing junior hickey for Orebro, and is an ice hockey player with massive potential.

Every one of the Elite League clubs would have loved to sign the talented Duggan, but he chose a move to Wales.

He started playing ice hockey after watching his brothers play for Guildford.

“I looked up to my brothers and we have always been close,” he says. “They were schoolboys when the Mighty Ducks ice hockey movie came out and that inspired them to take up roller hockey inline.

“They had friends who played ice hockey and asked them to try it out. In a way I was born into it. Tom is eight years old then me, Ben 12 years older.

“They have helped me throughout my career and still to this day we speak every day. We talk about hockey and they are happy to help and advise.

“My brothers are great role models and I am thankful for that.”

I asked Duggan whether he would play in North America or Europe again, but he was adamant that his immediate future, for the next few years, is firmly with Cardiff Devils.

“I’ll take it a year at a time, but Elite League is at a standard to compete with top European leagues. It’s a great place to be. I am incredibly excited.”

Great Britain international Duggan played at Ice Arena Wales in a Great Britain exhibition against Norway, while he watched Devils take on Sheffield Steelers in a sell-out.

He will be in the Devils team against Coventry Blaze at home on Saturday and says: “The atmosphere was electric in that Steelers game. There were 3,000-plus fans at the rink. It was amazing.

“The fans are passionate and loud. I can’t wait to skate out in front of them.”