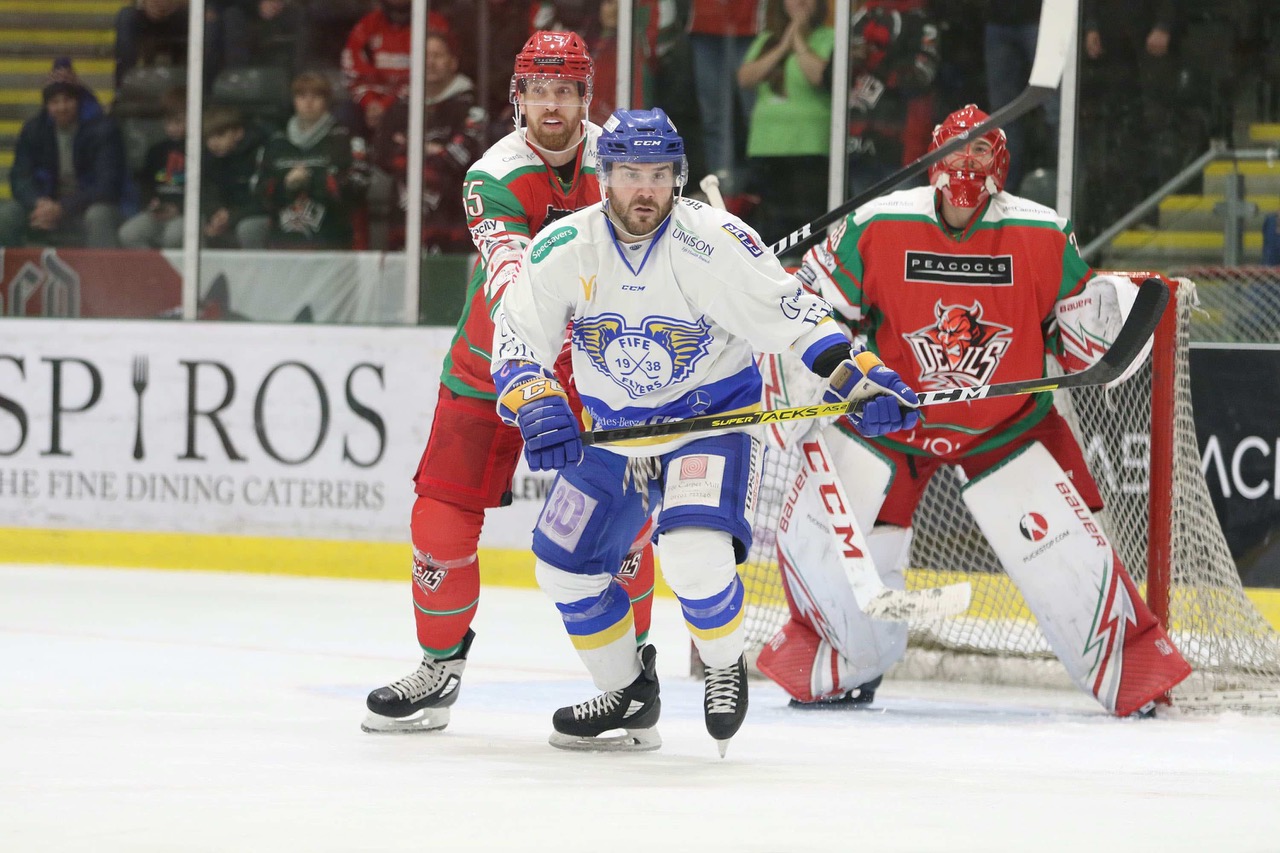 Cardiff Devils fans were given a ‘little sneak peak’ at new signing Shaone Morrisonn when he made his debut during the 3-0 home win against Fife Flyers last weekend.

NHL veteran Morrisonn was cool, calm and skated superbly in the Elite League clash. His presence alone is a bonus for Devils and he looks certain to make a big impact in Cardiff Bay.

This weekend Morrisonn’s experience will be invaluable during back-to-back Elite League home matches against Belfast Giants at the Viola Arena.

“Shaone brings a ton of plusses,” says head coach Andrew Lord. “The fans have had little sneak peak. He had one practice with the team and another session when he skated on his own.

“He did not have a pre-season training camp and this week’s sessions have been huge for him.

“Shaone brings stability, defensive awareness, skates great and will show those assets even more once he gets his legs under him.

“The playmaking ability is there, he has a good first pass and will be critical on the penalty kill.

“It’s a real privilege to coach a guy like that. He has veteran experience and a lot of our D corps will learn a lot from him.”

Devils were the only EIHL team to take all four points available last weekend, but Lord wants more from his team.

“There are areas we can improve in and that’s exciting,” he says. “We are going at those improvements hard in training.”

Cardiff and Belfast are going to be seeing a lot of each other before Christmas. This weekend’s back-to-back League fixtures will be the first time they have played each other this season, but the rivals clash in the Challenge Cup quarter-finals.

“We are the Cardiff Devils. We visit Devils Bay. Our captain’s Joey Martin and against Belfast we will play” #LetsGoDevils pic.twitter.com/Y4XxMQyrzD

“I expect high intensity games this weekend,” said Giants coach Adam Keefe. “Anytime we face Cardiff Devils there is a little bit more intensity level, I find, and I expect Saturday and Sunday to be no different.”

“It is a big weekend for us and a great challenge for us to go into Cardiff’s home and try to take points out of it.

“We are aware that so far this season we have not been consistent enough and it has not been good enough. We are looking for an opportunity to turn that around.”

Giants released Jean Dupuy and Jesse Forsberg this week and signed American forward David Goodwin, who goes straight into the line-up against Devils.

“Day by day I’m learning more and more (about Devils),” said Goodwin. “They are a good club as well and have good fans like we do. I’m excited to get in there and play another top team.

“We have two really tough games coming up and I don’t think there’s any better way to do it than against Cardiff.”

@JoeyMartin14 thanks for signing my custom statue I made of you. Going to look great in my hockey shed bar! @cardiffdevils pic.twitter.com/y3WDa5Hmw3

“I did some research on the team, the league, and thought it would be a good fit,” said Goodwin.

“I played with Curtis Hamilton before, in Finland. He was the first person I reached out to and he had nothing but good things to say about the organisation.

“Then I had some friends on other teams in the league. Sam Herr is captain in Nottingham and Nolan LaPorte, who I played junior hockey with.

“My strengths are speed and my playmaking ability. I like to get around the net and score some greasy goals. Those are the three things that I feel I can contribute.”

Giants face Devils in the Challenge Cup quarter-finals. The first leg is at the SSE Arena, Belfast on Wednesday, December 11 with the return in Cardiff Bay a week later (both 7.30pm).

Both Devils v Giants fixtures at the Viola Arena this weekend look certain to be sold out. Saturday’s match starts at 7pm, while Sunday’s clash will face-off at 4pm.