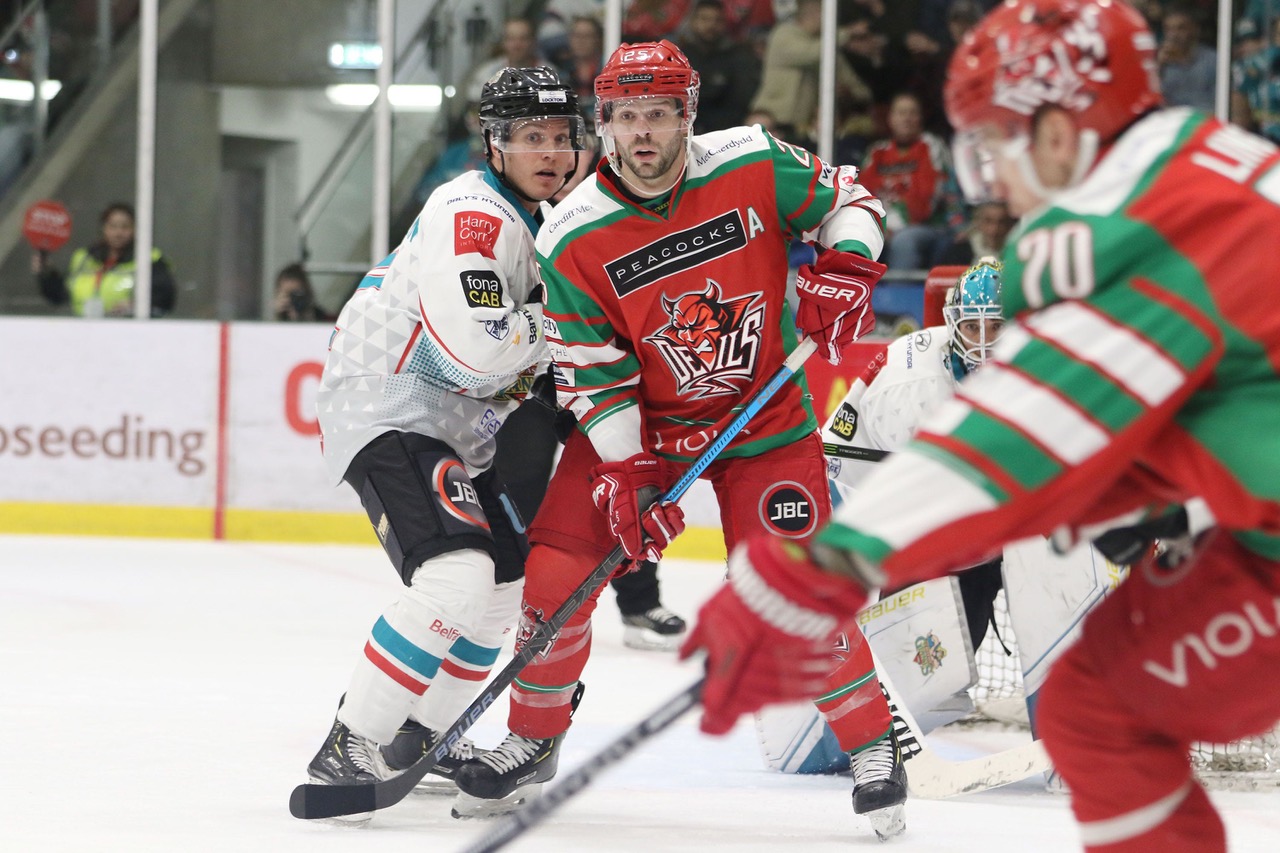 Captain Joey Martin and his Devils stunned Belfast Giants with the ferocity of their comeback from three goals down in this crucial Elite League match at their Viola Arena rink.

That gave both teams a point apiece and, while Giants snatched a sudden death overtime winner on a breakaway, Devils will take a lot of confidence from the way they fought back.

Cardiff are now two points behind leaders Glasgow Clan with two games in hand and one point ahead of Belfast going into this afternoon’s second clash between the rivals, also at Viola Arena (4pm face-off).

I read one social media post by a Devils fan slamming the effort from Cardiff and calling the team ‘gutless’. What a load of tosh.

Devils are not playing at their consistent best, but the effort and passion they put into this match was magnificent.

The fourth line, comprising Matthew Myers, Sam Duggan and Josh Batch, laid the foundation for what was a gutsy team display, full of character and spirit.

“Our fightback in the third period was huge and showed a lot about the veteran leadership we have in this team,” said Devils assistant coach Luke Piggott.

“We are aware now of the way we need to play to beat this team and make the most of lessons learned.”

The atmosphere at Cardiff’s Viola Arena was awesome from the start with the block 13 standing area making enough noise to spark up all Devils fans.

Those three Giants goals rocked home supporters, but the style of Devils comeback left the visitors hanging on before the puck broke their way during 3v3 overtime and Bobby Farnham fired the winner three minutes, five seconds into overtime.

Devils had Masi Marjamaki thrown out on a five plus game for slew-footing after seven minutes 46 seconds – and that handed Giants a five minute power play.

Cardiff, already a goal down, restricted the damage and conceded only one goal.

Belfast scored three PP goals and Piggott said after Devils picked up 35 minutes in penalties: “We took a few ill-judged penalties and they really hurt us.

“Giants’ special teams are dangerous and our PK could have been better.

“It was important to get back to basics and try to counter their aggressive forecheck. Our third period was a lot better. Unfortunately it did not go for us in overtime.”

“We handled the situation well and to come out with the overtime win was a huge confidence boost that we can take forward,” said Belfast assistant coach Jeff Mason.

“We caused Devils a lot of problems in the first 50 minutes. Three powerplay goals is a big boost to our team.”

It was a fiercely contested, hard-hitting match on Saturday and now the teams do it all again. Playing back-to-back matches between two teams ensures the second fixture will be an emotional, physical clash.

Sheffield’s overtime win against Nottingham moved them back up to second and with Glasgow not playing on Sunday, Steelers could end the weekend back on top.

“Our main focus has to be cleaning up in our own zone,” said Blaze coach Danny Stewart after their 7-3 defeat in Dundee.

“We did some positive things in Dundee, but overall it wasn’t a good night.”

Manchester Storm earned an excellent shootout win in Fife to move on to 13 points which, although they are still last, keeps them only three points from breaking into the play-off places.

Nottingham lost in Sheffield after overtime, but that point kept them seventh and ahead of Guildford in what’s becoming a very congested middle of the table.

“We have three road wins in a row and that’s something that has been an Achilles heel for us previously,” said Storm coach Ryan Finnerty. “It’s something we need to take into our own barn against Nottingham.”

Flames and Flyers travel down from Scotland for their clash in Surrey. Guildford will be full of confidence after their win against league leaders Glasgow, while Flyers went down against Manchester in Kirkcaldy.

Can someone explain to me how Bentivoglio (red 85) gets called for tripping here? pic.twitter.com/5zDfIqWKLY