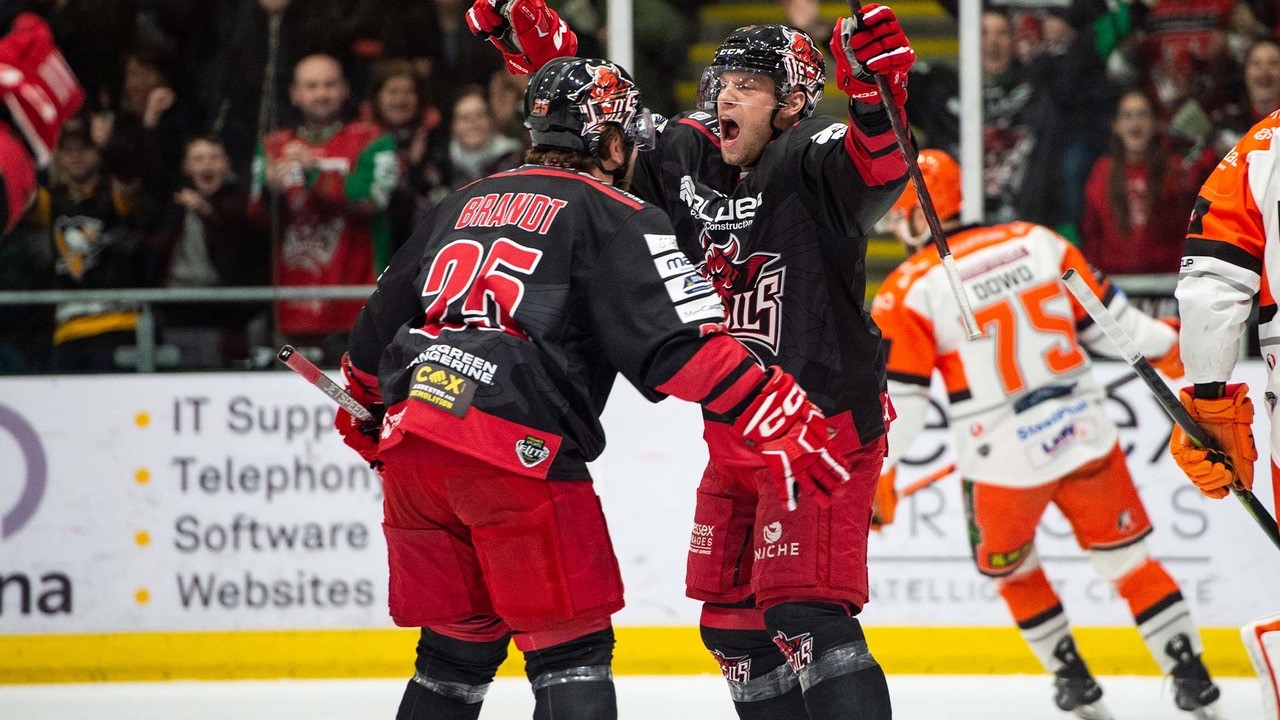 Ben Davies’ early opener for the Devils was wiped out by Scott Allen’s wrist shot in the first period.

But the Steelers were unable to recover after Trevor Cox’s back-post finish restored the Devils’ lead in the middle period.

Taran Kozun’s goal faced sustained pressure from the visitors in the closing frame, but the Devils defence held firm before Cole Sanford’s chip out released Cox to tee up Martin to put the result beyond doubt.

The win improves the Devils’ league record to 21-7-2 and further narrows the lead at the top of the Elite League with just two points separating the top-three teams.

Sheffield and the Guildford Flames are separated by a point and both teams have played a game less than third-placed Cardiff, who now trail the leaders by two points.

The Steelers arrived in Cardiff Bay coming off nine-successive league wins, but the Devils will have sent them home with a clear statement of intent ringing in their ears.

After being brushed aside by Sheffield in the Challenge Cup quarter-final over two-legs and handed a home league defeat earlier in the season, the Devils looked decidedly better equipped for the challenge.

But this wasn’t a case of being third-time lucky, rather the Devils outsmarted their rivals and were fully deserving of the win.

A formidable-looking Devils team out-shot the Steelers 39-25, adopting a game plan that saw them look more composed and efficient than they have arguably done all season.

At various points this season, the Devils have threatened to derail their own efforts to force their way into title contention as inconsistent performances throughout the line-up contributed towards some inconsistent results.

However, under Brodie Dupont’s tutelage, there are clear signs this is a growing Devils team who’re coming out of their shells with an increased air of self-belief, resulting in a composed outfit capable of playing smart hockey and competing with the very best at this level.

More than any other point of the season, there is a real sense that things are now falling into place.

“Sometimes, these things take time and we’ve been building towards something,” said Dupont post-game.

“There’s still half a season left, more or less, so there are lots of games to be played.

“We’re in the conversation, we’re in the hunt and that’s where we want to be positioned going down the stretch so it was a big game tonight and the two points are really big for our confidence moving forward.”

Dupont’s team not only nullified Sheffield for much of the game, but they were able to create chances of their own in the offensive zone, and absorb pressure down their end of the ice.

“We discussed how they try to retrieve pucks, we noticed a tendency and tried to take advantage of it.

“We felt like we could kill some of their speed, because they’re so effective at coming out and retrieving pucks. That’s one of their assets and if we could slow them down a bit with a forecheck we felt we would have a chance to get back in the offensive zone,” explained Dupont.

Taran Kozun was named as the Devils starting goaltender for a seventh-consecutive game, with Ben Bowns surprisingly absent and rookie Will Kerlin filling in as backup.

Kozun produced a 24-save performance that saw him claim another Player of the Match accolade. And it would seem the sequence of starts is helping the 28-year-old forge a healthy dynamic between himself and the Devils defensive core.

On a rare occasion when he appeared to have been beaten by Sheffield in the third period, defenceman Josh Batch was there, perfectly placed, to make contact on the puck and deny a one-timer from Brett Neumann that seemed destined for the net.

“We wouldn’t be here without Batchy on the back door of that wide open net[chance],” said Kozun.

“He made a big save there for me. It’s been a blast playing in front of these sold-out crowds, the crowd are getting us going and the boys are buzzing right now.

“It makes my job easy when they’re giving me the lanes and when the lanes aren’t there, they’re blocking shots for me too.

“We’re working as a really good pair right now and we’ve got to keep it going.”

The Devils face Manchester Storm away in the league on Sunday before heading to France the following weekend for the final stage of the IIHF Continental Cup.